Next up for our nerdcore interviews is Twill Distilled. This singing and rapping powerhouse has been performing since grade school. Her hacker past and roots in J-pop and dirty pop music, give her the drive and energy to chase her artistic dreams.

TD: Let’s see. So funny story. I’m going to get in so much trouble. I used to work for a website called Encyclopedia Dramatica and I used to do a lot of parody music work for them. Which in a sense was kind of Nerdcore because it was music about you know Internet culture and internet drama and everything like that. I did that for a while in college, and then things did not end so well.  I specifically got into nerdcore because one of my friends sent me YTCracker and his music. I was instantly like “Wait! There’s a genre for this is awesome.”

MxJ: How would you describe your music and your style?

TD: I change a lot because I do my Twill stuff and then I’m in Wreck the System. Twill Distilled is completely different sound wise than what Wreck the System does so I have people who listen to me on Wreck stuff, and then they hear my Twill stuff, and they’re just like “wait for thats the same person?” So I like to think of it as a dirty pop which is a mixture of really fun catchy pop songs but still that kind of “Becky rap.” It’s hard because one day I’ll be doing something like totally J-pop and you know happy hardcore and off the wall crazy and then the next day you know I’m rapping about whatever I’m rapping about with Wreck the System, so it is hard to kind of brand it.

MxJ: So let’s talk about Wreck the System. How did you end up with them?

TD: I was lucky. When I came back to doing nerdy music, I was trying to book performances, and I was literally like you don’t have to pay me just let me perform. Which did not go so well? I got booked for T-Mode because they had an open mike event kind of thing for nerdy rappers. So the same year that I performed at T-Mode, Lady J (Wreck the System) had just put out her album “Our Fantasy II” and was one of the headliner performers. So just happened to walk by the performance space at the same time that I was on stage, and she was like “whoa wait for another female rapper. This is awesome.” I got her contact information, and we stayed in touch for a few months, and in September or October of 2015, she was like “hey we’re putting this project together. We noticed that you know you seemed to know everyone in Nerdcore. Would you mind you know helping us get this project going? We want you on the project, ” and I was like sure! Then we started working together and about a month into working on the project, they were like” OK so you actually do what you say you’re going to do, which is cool because most people don’t, and you’re reliable you know would you like to be a part of our team and see how it goes.” And it just kind of has evolved. I mean we’ve only been together really for a year, and it just snowballed into this like an amazing group, and I love them so much. So that’s how it happened.

MxJ: Who is Wreck the System?

TD: In Wreck the System we have our DJ/manager D.J. Mutiny, and he is a fucking genius. He organizes everything. We have Lady J who is effectively our leader and owner I would say because she started the group she owns the recording studio with the same name. Then there’s CAM3. He’s on RAP vocals, and he produces a crap ton of beats that a boy is a machine. Osiris Green who also works as a producer. He makes beats. He’s an engineer as well. Lady J is our head engineer. And then there’s me. You know I sometimes produce beats when they don’t sound super J-pop, And you know obviously I rap, and I mostly sing. Yeah, it’s just the five of us. Well I mean I’ve always been, and I hate to say this is the kind of person who has never ever wanted to be a part of a team because every time I had been a part of the team people always let you down and people are not who they say they are. So for me when I find just one person who is effectively who they are who they say they are and they do what. 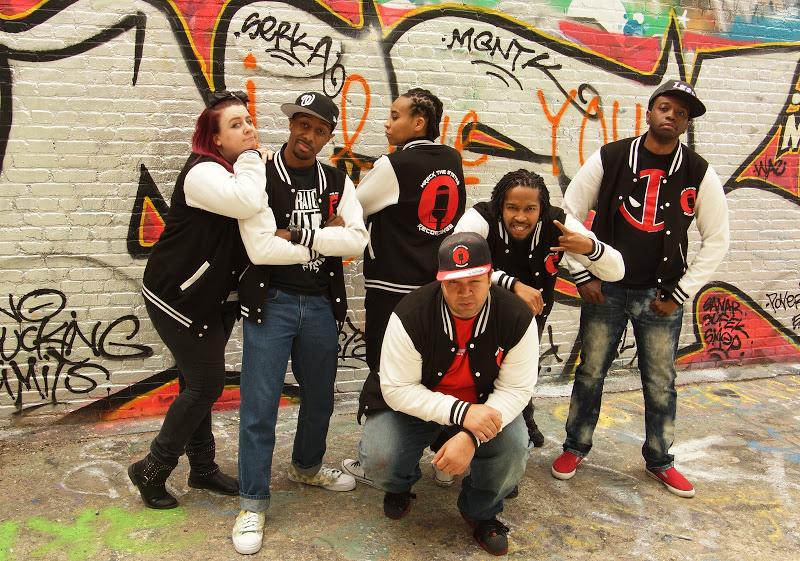 MxJ: So that’s your origin story with Wreck the System, but what is Twill Distilled’s origin story.

TD: So touching back on what I said earlier about working with E-D and then finding YTCracker’s music, that’s how I got into Nerdcore. Singing and performing, though, I’ve been doing that pretty much as long as I can remember. I studied voice and was in the Peabody children’s chorus at Johns Hopkins in Baltimore at the age of 10, and I did that until I graduated high school, graduated from the group essentially. In college I took a break, I went to school for fashion design because I thought I was really bad {at singing}. I got bullied a lot. People were like “you suck, ” and I was like “oh you must be right because that’s all I hear.” Which is awful because I was in a prestigious group, to be in a vocal group at the age of 10, you would think “Hello Dummy. You know you’re good”. So I went to school for design and art instead. Then when I was 21, I started going to bars and singing karaoke and these random strangers would come up to me and be like “you’re really good.” When random strangers are coming up to you being like you should try out for the voice, and you should go out for Idol and blah blah blah. You tend to start to believe in yourself. I’ve been doing this since 2013, and it’s just really taken off especially within the last year or so.

MxJ: What do you feel like your greatest accomplishment is so far?

TD: I’ve done a lot of stuff. One of the cool things I got to do when I think 2014 was I had a song that made it onto a documentary called The Hacker Wars. I will warn anyone who watches it, it has very strong racist language, so not so proud about that part. Just to have a song on IMDB, that was cool. And it’s helped me meet a lot of other people. So like one of the guys who did a remix on my album came out of that because he was a fan of my song from that documentary. So that was a big thing, but last year, 2016 I did a song with the artist called SkyBlew who we worked on a track together, and it got submitted through some Korean producer to a Japanese label album called “In the Mellow Zone.” Well, our songs on this album and not only did it release in Japan, but it also hit the Billboard charts in Japan and was number one on Japan iTunes. Our song was the third most popular song on that album.

MxJ: Who is someone that you just really really want to work with?

TD: They are a dirty pop group to you called The Millionaires. They are very much underground, but they’ve been around since 2004. They were on bad girls club season 2015. I’m a huge, huge fan. I’m really sad they haven’t put out new music in like four years because they’re all doing their own thing now. They are my biggest influence; I would love to work with them because they’re probably my favorite band period.

MxJ: So what’s coming up next for you?

TD: I just put out an E.P. in December. So that is dying down now, and I probably spam it way too much, but this year I’m not doing any huge Twill solo releases. I’m more focusing on a YouTube channel. I find that a lot of people like to know what I’m doing because I go to a lot of events. So the YouTube channel is going to be a big project this year where I will be doing a lot of behind the scenes videos and people will be able to feel like they were there even if they weren’t there. You know they’re shots of like rehearsal I recorded. I shot a lot of stuff from Shaefer the Darklord show back in December when he was out in Ohio. So on top of that, I’ll be releasing a new single and a cover song every month so that I’ll be starting up in February. I get to record the first chunk of that this weekend, so that’s mostly what I’m focusing on solo wise. As for Wreck the System. We have an album in the works, and I am so pumped about this album. It’s going to be great. It’s going be great.

MxJ: So what are your wildest dreams for yourself and your music.

TD: That because some cliche you know I just I want this to be what I do full time and I want to travel the world and perform. I want to be the person who you know puts albums out and puts out a good project that you know connects and touches people and makes people feel better. I got to experience that with the E.P. I dropped, Distilled Screens, it’s a breakup E.P. and it talks about the different things you go through in a breakup. And I had a lot of people be like “this helped me thank you.” So being the kind of artist when I’m out there and getting to you meet and sing or rap for people and just make a difference, even for a few minutes. That’s what I want.

Wreck the System will be performing April 16-18th Weekend in Columbus Ohio at Shumatsucon 2017!

http://www.shumatsucon.com/ (word has it the nerdcore concerts will be on Saturday. Did I mention Ran is playing there this year too!? ^_~)

And of course social media plugs:

https://www.youtube.com/channel/UCLSsa5E1qvScgpZ2jv85B2Q <– More coming as of next week!

Marjie Southerland is an actor/singer/mover/shaker from New Jersey, living “The Dream” in Chicago, IL. Check out her website www.marjiesoutherland.com and ‘like’ her on Facebook to stay posted on all of her adventures!