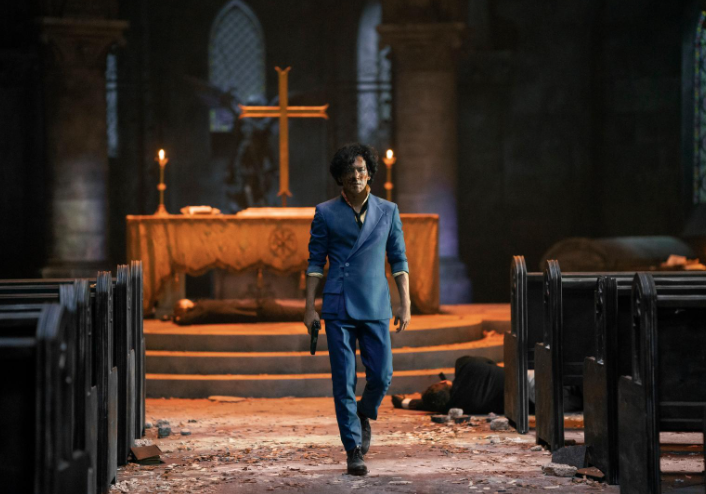 Without a doubt, Hajime Yatate is known for paying homage to Black culture in his anime series. From staples like Samurai Champloo and Kids on the Slope, Yatate has a unique combination of jazz, diversity, and overall swagger.

Animated by Sunrise, the original 1998 Cowboy Bebop anime was born through the combined labor of screenwriter Keiko Nobumoto, composer Yoko Kanno, and more. Cowboy Bebop reached American audiences in 2001 when Cartoon Network added it to the Adult Swim lineup.

After 26 episodes and the film, Cowboy Bebop: Knockin’ on Heaven’s Door, the franchise would garner a following just as fierce as their favorite space cowboys Spike Spiegel, Jet Black, and Fay Valentine. However, when it comes to live-action anime adaptations, many fans of the cult classic aren’t as enthusiastic. With a lot of poorly made, white-washed, and visually dull live-actions, their hesitancy isn’t without good reason.

The new Cowboy Bebop takes aim at the pedestal that the original sits on. It brings viewers to the familiar yet different post-apocalyptic universe filled with dirty bars and scandalous casinos, where a combination of cultures and skin colors are represented.

Following in the original anime’s footsteps, this version also introduces an Earth in the year 2071 that has gone to ruin. Refugees living on other planets experience a great divide between the haves and the have-nots, as class, race, and corruption impact their place in society. However, the differences are immediately apparent.

The backstories of the main characters are fleshed out more in the live-action, which in theory seems like a smart move yet feels less immersive. Spiegel is still a former member of the syndicate, Black is still an ex-cop, Valentine’s foggy past still reigns true, and Vicious is still vicious, but what once felt like a deeply intriguing puzzle to solve is kind of obvious and comical.

Unraveling Spiegel’s past is a major hook in the original anime, and there is an immense sadness at its core. Additionally, audiences were interested in Valentine and Black’s pasts. Yet the live-action seems to quickly serve all the details up on a silver platter, and it’s only sort of interesting.

Maybe those who never watched the anime will find a more significant plot buildup, but seasoned fans will spot how the adaptation both closely follows the original in some places but decides to do its own thing in others. When it all comes together, it’s kind of weird. Perhaps because new and old storylines are unintentionally competing with each other, it doesn’t mesh.

The same is true with the characters. Some of their performances hit the ball out of the park, but others feel like failed DIYs. Spiegel and Black are wonderfully cast while Pineda’s Valentine is missing the sultry style and badassery of her predecessor. Additionally, with over-the-top angry faces, Vicious is more comical than menacing. He’s no longer a formidable antagonist but more of a child with unresolved issues who happens to have a lot of henchmen. If the major villain is boring, there’s a problem.

The Red Dragon Crime Syndicate also once seemed ominous and powerful, but now, they seem like they’re used to fill space for the newly revamped plot. Their influence seems watered down, as they specialize in assassinations and tracking narcotics with the ability to take down members that fail them. The story surrounding the elders is rather half-baked.

With all of that said, the adaptation does have some wins. 2D animation has the advantage of seamlessly formulating action scenes that are larger than life, but live-action gives fans a visual of more realistic flight sequences. From the martial arts influences and the unique weaponry, the 2021 version does illuminate the beauty of heated stand-offs against the gleam of the neon-lit dystopian galaxy, even if it’s got too much CG going on.

The biggest win of the show is with its casting. Despite its shortcomings, the push for representation does make it stand out, especially compared to most anime live-action adaptations. Cowboy Bebop was never shy about having Black and Brown characters who weren’t awkwardly forced into the story. Many fans are sick of white-washed anime live-action casting and this series suggests that Netflix is finally paying attention.

It seems almost farcical that people have to fight for Asian actors to portray Asian characters after so many years, yet this is how so many cherished animes and shows go horribly wrong. From Avatar: The Last Airbender and others, this sort of casting has rightfully led to fan backlash.

Cho has the right look and fitting sarcasm for Lee, but there is a bit of depth missing. Shakir, probably the best casting choice, is strikingly appropriate for Black, and the plot seems to work the hardest to build the backstory of his character.

Tamara Tunie (Ana) stole the show and proved to be both a cool and influential force who makes many question her motives and plans throughout the series. Mason Alexander (Gren) is nonbinary and also portrays a likeable reimagined nonbinary character who works as a stylish jazz musician working for Ana.

For the most part, casting won, but so much else ranged from so-so to poor execution. With so much to live up to, this Cowboy Bebop doesn’t quite hit the mark, but it does prove how Netflix is getting closer.

Cowboy Bebop premieres on Netflix on November 19, 2021. In the meantime, the original anime is available on the streaming platform for both new and OG fans to enjoy.