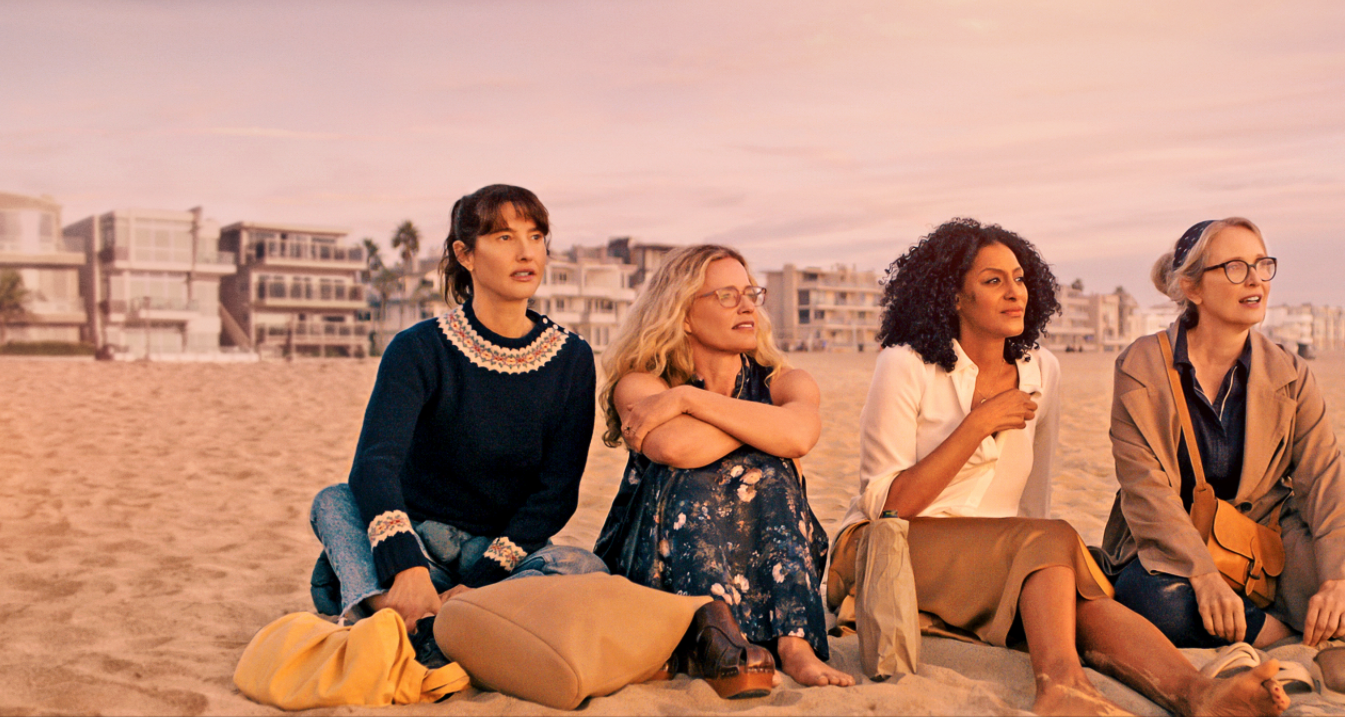 Remember January 2020, two months before a global pandemic changed our lives? Writer/producers Julie Delpy and Alexia Landeau reveal the hilariously tragic realities of cisgendered heterosexual women in their late 40s and early 50s living in and near Venice, California, right before the pandemic.

On the Verge centers on Justine (Julie Delpy), a successful French chef and restaurateur who is in the process of writing a cookbook while managing the ego of her out-of-work architect French husband and their almost perfect son. Justine’s friend group includes 55-year-old clothing designer Anne (Elisabeth Shue), who is completely funded by her wealthy mother, is usually high by 1 p.m. and is married to a man in his early 40s with a gender-nonconforming child.

There’s Ell (Alexia Landeau), a culturally Jewish low-wealth woman in her 40s who has three children with three men of different races. Finally, there is Yasmin (Sarah Jones), who describes herself in the first episode this way: “I live in a completely white world. I’m Black. I’m Persian. I’m an out-of-work feminist whose husband pays for her laser hair removal. Who the &%*# am I?”

The first episode brings the quartet together at Yasmin’s 46th birthday party. It’s easy to believe that these four women have known one another for over 20 years. The writing and acting throughout the series have a realistic, conversational down-to-earth tone, with flashbacks interwoven throughout, that highlight the comic tragedies of each woman’s experience. On the Verge is written by Julie Delpy and Alexia Landeau, who are both French and are able to reveal the paradoxes of progressive American whiteness in ways I don’t often see in half-hour comedies in the U.S. Delpy is known for writing films based on her own individual experience. Judging from this series, I think Delpy must have attracted one biracial Black woman into her friend zone.

The actor who plays Yasmin, Sarah Jones, is brilliant. She is an actor, writer, and producer who broke into Hollywood from Broadway about 20 years ago with her one-person Broadway show, Bridge and Tunnel, which was produced by Meryl Streep. Yasmin has a Black mom who “was practically a Black Panther,” and her dad was Iranian Muslim, which she reveals in a job interview when speaking to a potential employer who is younger than her.

What’s refreshing about Yasmin in this series is that she is not the wise, nurturing Black friend of the group. She’s really kind of a hot mess, and she breaks stereotypes in interesting ways. Seeing a Black woman dealing with problems like feeling insecurity about growing older, being loved by her family and friends, facing the challenges of going back to her career after being a stay-at-home mom for several years, dealing with an annoying barking dog next door — while also being neurotic, overpampered, and patiently loved by her husband, who happens to be a progressive white guy is refreshing.

The irony shown throughout this series makes the humor authentic and delightfully surprising to experience. In the first two episodes, Yasmin was getting on my nerves and I wanted to dismiss her, but her neurotic behavior totally makes sense in later episodes. As the series progresses, we begin to see there’s more than meets the eye to this character in very unexpected ways.

Delpy and Landeau’s writing is so authentic that at certain points it felt as if I were sitting at the table with a group of friends. I also loved how the writers approach class in LA. Yasmin, Anne, and Justine all are married and wealthy in different ways. Yasmin’s husband works in tech. Justine is basically a celebrity chef, and Anne is a middle-aged trust-fund baby able to have her own business because she is totally funded by her wealthy mother. On a visit to the accountant, Anne learns her business losses earn her wealthy family more money due to Trump’s tax cuts.

Then we have Ell. Although Ell and Justine went to college together and worked in restaurants together when they were in their 20s, Ell’s career attempts never quite stuck, so she is constantly looking for work, getting jobs, then self-sabotaging herself into losing the jobs she gets. The higher-income women each have one child. Ell has three, and the only baby daddy who pays alimony is her Black ex-boyfriend.

There’s so much to unpack there. I love that Delpy and Landeau actually go there. The woman who is the most irresponsible — most on the verge — is the woman who stereotypically would be considered to have access to community, money, and power. I love the layers of conflict woven through every relationship as the couples deal with money. The relationship dynamic between Justine and her husband, Martin (Mathieu Demy), is spectacularly messy. Justine works her butt off and is talented and successful, and instead of supporting her, Martin focuses on pursuing work he can never get and is jealous of her success.

On the Verge makes space for women in their 40s and 50s to reside on-screen, beautifully flawed, imperfect, and human. Justine and Anne wear glasses, have cellulite, and have soft, beautiful bellies. Yasmin has prominent birthmarks on her shoulder and cheekbone. We can see the lines and the beautiful character of facial maturity on Justine, Anne, and Ell. The series was written and filmed during the pandemic so perhaps the authentic feel is connected to the artists being able to continue to work in the community during a time when the entire world was sheltering in place.

On the Verge reflects the lives of folks of a certain age who found their chosen family and did the work of sticking with them beyond their flaws. Human beings are meant to live in a community, interconnected, as we stumble through lives that go by way too fast and end too soon. On the Verge is a celebration of being middle-aged in all of its glorious and, yes, sexy chaos.

On the Verge is now streaming on Netflix.

SXSW 2022 Review: ‘Sell/Buy/Date’ is an Incredible Work of Creative Brilliance