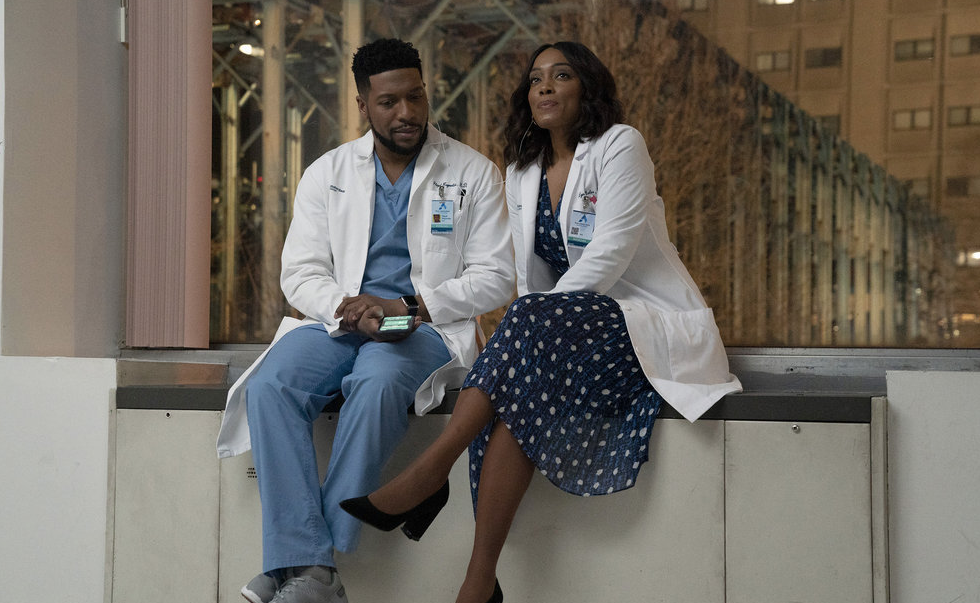 If you’re a New Amsterdam fan, then you know the NBC series is wrapping up its third highly-rated season. If you’re a fan of the simmering romance/non-romance of star Ryan Eggold (Dr. Max) and Freema Agyeman (Dr. Helen), you’ll love what has recently been happening with another doctor possible-coupling between series star Jocko Sims and newcomer Frances Turner.

BGN caught up with the actors to talk about open marriage and the rocky road to romance between Dr. Floyd Reynolds and Dr. Lyn Malvo.

First off, what happened to the actor Margot Bingham? Did she leave for The Walking Dead?

Jocko Sims: Oh, no, it was my understanding that those schedules were not going to conflict.

Looks like you two are being set up for a romance, any comments?

Sims: What you have here is some sort of situation-ship. It’s great for Reynolds because Reynolds prided himself in the past for wanting a family and wanting that picture perfect, white picket fence, Black wife with the kids.

So here we are once again where he’s in a situation where this is not what he’s been putting out. I think it’s very bold of the writers, and I love seeing the reactions of the fans online. [The fans] were saying, “Reynolds shouldn’t be in that situation, he wouldn’t do this and that.” You know, at the end of the day, these characters are human beings.

He’s been thrown off by Malvo’s charisma and just all of her greatness and perhaps proximity has something to do with it. So we get to see if he’ll be willing to take that leap.

Frances Turner: I don’t know if either one of them is like, “Oh, we see each other pass in the hallways, I want to get with him, I want to get with her.”’ I think it just kind of happens. You meet someone, you find yourself thinking about that person and then you want to spend more time with them. You go get an oat latte with them and then that turns into a beer. The more you talk, there’s that thing.

The complication here is she has a ring, but the other is, what does that ring mean for her? There’s something about it that does feel very genuine. I love that it’s not just about sex. They have a real connection.

But there’s a lot to unpack before that, correct? Can you guys hint a tiny bit about what you think is to come?

Sims: Well, we got to wrap this up because fans are not going to be satisfied with this back and forth for too long. We’ve got some other dynamics on the show and people are, “What’s up, y’all? Y’all been teasing this for so long.”

Somebody’s gotta make a move. It will be interesting. We shot everything and I think people will be pleasantly surprised and thoroughly entertained.

Turner: Because Reynolds has to decide.

Sims: Yeah, he has to make a decision. She seems to have stated in the past episode what’s going on and if they were going to partake, what the boundaries would be, given her situation.

Jocko, this is such a popular show. The writing is so good that the cast really looks like family. What’s it really like on set during these times?

Sims: If anybody were to take a look at my Instagram stories, you’ll see that No.1, it’s a lot of fun. I like to have fun. I might have a little too much fun at times. I didn’t know what Francis was gonna think when she came and saw my silly behind. I’m always busting out my camera, putting it in her face. I love that she’s a team player.

I think that the fans like to see this sort of stuff behind the scenes and how we really get along. Whether the cast likes it or not, I’m going to always be there putting cameras in a face and putting them on the spot and sometimes we get some magic.

The hardest part for me is to hold on to for each episode and then release it. [In] Season 1 and 2, I would shoot something and as long as it didn’t interrupt the story or reveal anything, I posted in real time. But this time, things coincide with the episode so people can go, “Oh, that’s what was going on between takes on that scene.”

It’s really important to show those things. It is truly magical, and Francis has been a fantastic addition to the cast.

Frances, what’s the most interesting or surprising thing you are finding about working with this cast?

Turner: I would say it’s surprising just how easy an environment it is. It definitely feels like a family. I walked into something that was very welcoming, kind of easy and supportive and loose. You know, not every project nor every set is loose and allows you to do your best work. So it’s been a joy for me.

Who is Dr. Malvo, in your opinion?

Turner: I think she is a woman just trying to figure it out. The thing that I love is that she’s a confident woman. She’s an accomplished woman, a smart woman that we see at the hospital, but we also see the other side of her that is vulnerable, that is soft, that is emotionally open. Reynolds melts that away for her as they spend more time together.

She digs him and she has this understanding in her marriage, but she’s never actually acted on it before. She’s not as confident about broaching this with him as someone who’s used to doing this already. This is new for her, too.

Jocko, you were on The Resident for a while. Coincidence, or do you have a love of playing doctors?

Sims: I wanted to be a doctor when I was in school. When I got to college, I said, “Just let me not be in school for the next 12 years. Let me get into acting,” and I fell in love with it.

Since I started I always wanted to play a doctor but the roles always evaded me. I wasn’t quite old enough at first, and I manifested it so hard that my recent two roles were both doctors. I did The Resident for two episodes in Atlanta. They called me for a third but then I was auditioning for this show.

I was trying to keep it under wraps because [sometimes] producers of other shows are like, “Nope, you played the doctor there,” so I kind of hid that I was on The Resident, and broke through this process of New Amsterdam. [Resident] started airing after I booked this job, and I was very thankful that I put it everywhere. “Hey, check me out on The Resident and then check me out as Dr. Reynolds on New Amsterdam.” So it was just a coincidence. I just put that out there so much, and it finally came to fruition twofold.

Get to Know Jocko Sims as Dr. Floyd Reynolds on NBC’s New Amsterdam’