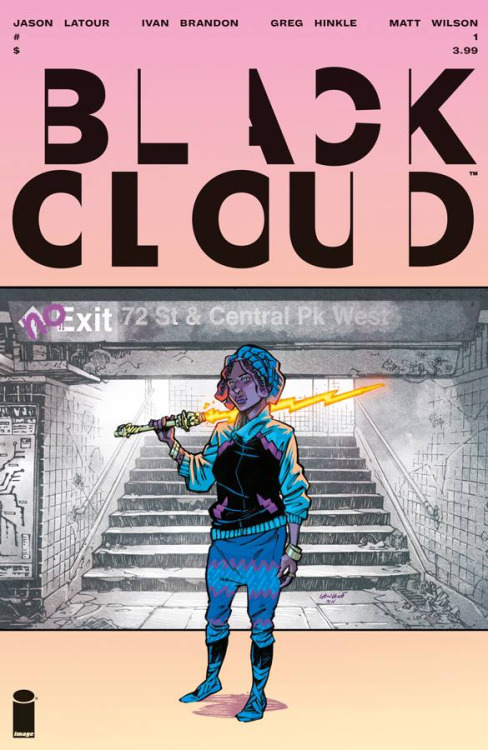 Black Cloud, written by Jason Latour and Ivan Brandon, tells the story of a young woman born into the dream world but escaping into ours. Zelda Barret wields extraordinary power but limited means. She makes her way in the very modern world by peddling dreams like drugs and walking the highest bidder into her world for short visits. When in this world, however, Zelda seems to be running from some very dark secrets. The story, in and of itself has a draw and a ton of potential. Personally, I love a well-done fantasy, and you get extra points when you can flawlessly lace it in with the modern world. I am not yet sure if Black Cloud will get those extra points, but so far, I am intrigued.

I am a fan of Image comics, by coincidence, not design. Image often does right by me in the storytelling department, though I would like to see them using more creators of color and women creators. It just so happens that most of the stories I enjoy, they produce, so I came into Black Cloud with some high expectations. I know, I know, this is always a bad idea for a critic, but alas, I am human, and bias remains. With that said, Black Cloud was not all I was hoping for, but I was likely hoping for far too much. Issue 1 of Black Cloud was a strong start. It introduces an interesting new world intermingled with a familiar one, and I am happy to see to a black female lead character. I am also a little bias there, but this story is just unique enough to intrigue me and keep me interested, even if that weren’t the case. For me, the quality of the story is above all. And Black Cloud does have an interesting story.

The art in this issue was definitely eye catching. I can appreciate the styling of Greg Hinkler, the man behind the pencil for this project. I like the way he uses hard, sharp lines to contrast against smooth curves. I think it stands out the most in the primary character, Zelda, which I have to assume is intentional. Her body is often drawn in jutting, squared lines, while her hair, when loose and in its natural form is always soft, curved and inviting. I do wish he would soften up some of those hard lines, as black women are so often depicted as masculine, but I do not know enough about the character yet to know if that would be wholly appropriate to her. This is just a preference in style.

I absolutely ADORE the coloring in Black Cloud thus far. Matt Wilson really uses the color to submerge the reader and characters into the dream world. I love the way he plays with pastels and bright colors against black, white, and grays. Even from the first page, this pulls you in. Extra cool points for knowing how hot purple is as a lipstick color right now, by the way! As far as the lettering is concerned, I was a bit thrown off in the beginning. The thought boxes and dialogue bubbles were so similar that it took me a panel or two to know I needed to go back and read them as separate and distinguishable, and that took me a bit out of the story. It wasn’t unforgivable; I always find it more difficult to follow along with a digital copy. This likely would not happen if I was reading a print. Unfortunately, after having read and re-read about 4 times, there is still one thought box that I do not understand, it does not seem to fit within the trail of thoughts or dialogue. On page six it says “or off a ledge”, and I swear I do not know what is being addressed. I am sure it’s super obvious, and I look forward to someone hopping into the comments section and setting me straight.

Ultimately, I liked issue 1 of Latour, Brandon, and Wilson’s Black Cloud. I will most assuredly be buying the first few issues to see how this very interesting story hashes out. I need to again acknowledge my disappointment that in a book about a woman of color there is not a single woman or person of color who was involved in writing or drawing her. Nonetheless, I get the feeling that this story might find its way onto my pull list if it can stay  as interesting as it has been so far.

Vanee is an author, reader, writer and teacher that lives at the corner of coffee shop intellect and textbook geek! She loves cons, comics, and camaraderie, as well as fantasy, fiction, and fandoms.