On sale now exclusively at digital comic retailer Peep Game Comix, Nia Griggs & The Kemetic Sisterhood of Science #0 is a 16-page, one-shot comic designed to introduce readers to African-American superhero Nia Griggs and her world of espionage, ultra-science and much-needed diverse characters. This inaugural edition — a “pilot” issue, of sorts — throws the spotlight on Nia (aka “Isis”), a no-nonsense journalist who serves as a super-powered operative for the Kemetic Sisterhood of Science — an ancient, secret cadre helmed by the world’s most powerful women. The title is also the opening salvo of 20th Place Media’s 2017 publishing plan. 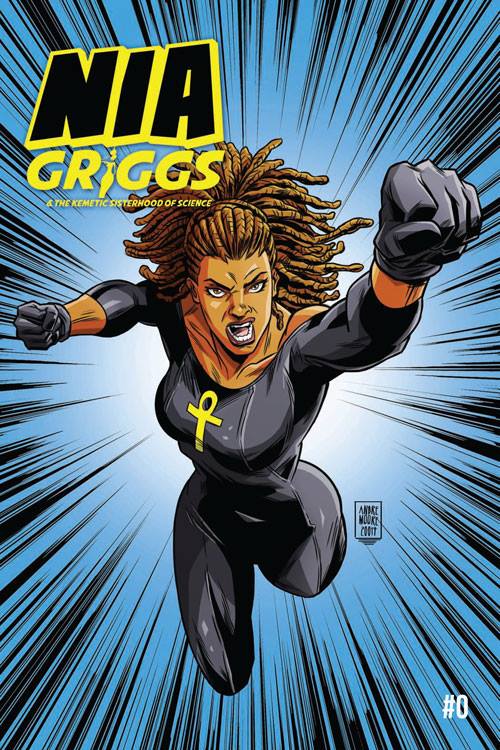 Joining the mission to populate pop culture with fresh portrayals of people of color, writers/publishers Carlton Hargro and Darrick Hargro (the creative team behind 20th Place Media) are set to release three “pilot issues” over the next six months — starting with Nia Griggs #0 — introducing three brand-new properties to comic readers across the globe. And it’s just the start of 20th Place Media’s movement.

But it all begins with Nia Griggs & The Kemetic Sisterhood of Science #0, written by the Hargro Bros. and featuring cover art by Andre Moore, interior art, and colors by Bridgit Connell (then-Bridgit Scheide) and additional art by Charles Rouse-Rodriguez. The #0 issue is being sold in digital format only for now, but print copies will be available this spring in a handful of select comic book shops in the U.S.

In the meantime, purchase the digital version of Nia Griggs & The Kemetic Sisterhood of Science #0 now at Peep Game Comix: http://peepgamecomix.com/product/nia-griggs-the-kemetic-sisterhood-of-science/

About 20th Place Media: Named after the street where its founders were raised, 20th place Media was birthed by writers/publishers/brothers Carlton Hargro and Darrick Hargro as a comic book and entertainment company dedicated to creating diverse characters that challenge traditional stereotypes based on race, gender and more. Stay tuned for comics and other related materials — starring your new favorite heroes and she-roes — coming your way in the near future and beyond. Visit us on Facebook at: