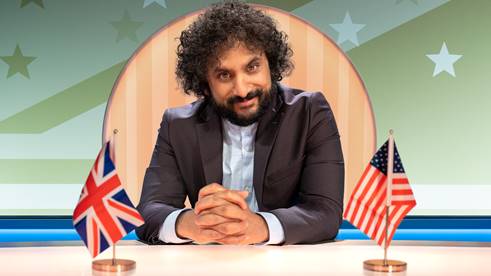 Twice a week, British comedian Nish Kumar looks at US politics from the perspective of our allies across the pond in his new streaming program Hello America.  He films his segments from the UK and a new one air on Quibi. Unlike John Oliver, Kumar lives in the UK and is truly bringing to Americans a telling and hilarious look at our politics from the other side of the Atlantic.

In this episode, Kumar joins forces with fellow comedians Kemah Bob and Ahir Shah to tackle the issue of statues honoring racist historical figures as they try to determine which countries statues and monuments are more problematic.

British comedian Nish Kumar brings his trademark levity and inspired wit to Hello America, Quibi’s new political news show.  Broadcasting from London, Kumar tackles US politics through a distinctly British lens, reminding us that whether the news is good, bad, or very bad, we are all in this together.  Wake up every Monday and Friday to your new favorite late night show – it’s so late, it’s actually the next morning. Hello America is your show for the shit show.