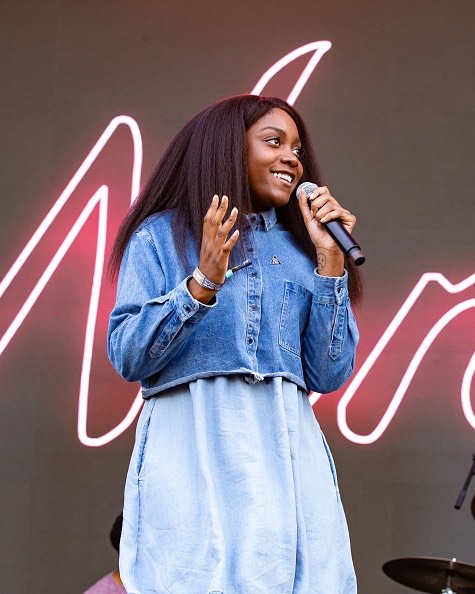 Chicago rapper Noname plans to bring diverse content to the literary community with the forthcoming launch of  Noname’s Book Club Patreon-exclusive newspaper, Out of Print.

The company announced that the paper will showcase artwork, essays, and book club notes from their featured contributors and incarcerated members.

Noname’s Book Club was launched in late 2019, with the mission to highlight authors of color by featuring two monthly selections for readers who follow the platform. The book club promotes “reading material for the homies” online, but also has local chapters that convene in person for a traditional book club setting.

The official website describes these in person meetings as a “safe and supportive environment” for its members to discuss the selected readings in depth. In addition to the book club’s growing following on social media, it has worked with community organizations to increase its local presence. Through the online platform, Noname’s team encourages readers to shop locally at bookstores owned by people of color.

On the Noname’s Book Club website is a list of bookstores across the country. While plenty of the members are based in America, the movement now spans international lines with members meeting all the way in London.

The book club offers Patreon-based subscriptions with membership levels starting at $1 a month. With a $10 monthly Patreon contribution, members will get the newspaper for free. Noname’s Book Club aims to raise enough funds to send their monthly selections to prisons in different cities. Through this effort, some inmates will have the opportunity to engage with the book club through facilitation and readership.

The SCI Coal Township Prison Chapter is the first prison-based chapter, which was started in February. The launch of this new chapter came in time for their facilitator, Dawud, to pick Love with Accountability as one of the March books of the month.  The inmates were able to hold their first meeting and have a serious dialogue about the readings with one another.

This won’t be the first philanthropic endeavor Noname’s Book Club has done to bring awareness to civil issues within the correctional system. Noname’s Book Club maintains advocacy for inmate’s rights and shares the stories of civil rights activists. Most recently, the book club has shared a series of tweets labeled “Political Prisoner” that’s meant to educate followers on the history of various activists who have been incarcerated for years due to their political actions.

Previous selections have included the work of authors who are revered for heavy political commentary, such as Sister Outsider by intersectional writer Audre Lorde. With Noname being known for her socially aware disposition and poetic sound, the literary work of classic authors, like Audre Lorde and Octavia E. Butler, is not by any means off-brand for the Chicago native.

Noname’s connection to literature is actually homegrown considering her mother owned Afrocentric, a bookstore in Chicago, something Noname revealed on The Daily Show with Trevor Noah during the book club’s infancy. She has noted that she spent a lot of time in libraries growing up.

The catalog of book selections did not forget to include the published work of modern writers. Kali Fajardo-Anstine and Danez Smith are just two modern writers to grace the list of monthly picks since Noname’s Book Club launched. The authors promoted through the book club’s platform showcase a great deal of variety across gender, cultural, age, and LGBTQ perspectives. The books picked display conceptual diversity. The book club’s members have had the option of reading essay and speech collections, comics, poetry compilations, memoirs, and short story collections.

Many of the selected works are chosen by Noname, but some are chosen by other creatives. The book club “lets the homies pick” one of the two books of the month. Earl Sweatshirt and Kehlani are among some of the contributors who added their picks to the collection. Community leaders have also added to the catalog of books the club has read.

Through Patreon, some membership levels allow subscribers to make submissions for possible consideration of future books of the month. Patreon members also have the opportunity to attend exclusive live streams, podcasts, and get early access to other perks.

BOOKS OF THE MONTH

LET THE HOMIE PICK. For April you can read one or both books. Yahdon (founder of literaryswag book club) picked War against all Puerto Ricans. I chose Mean by Myriam Gurba. pic.twitter.com/nlCbzuDe8P

Followers of Noname had the unique opportunity of watching her virtual Book Club concept come to fruition. Before developing the bookstore platform, Noname created a poll for followers and found that many were interested in the concept of an online book club. Since starting in late 2019, Noname’s Book Club has amassed almost 90,000 followers on Twitter at least 56,000 on Instagram.

What started as a conversation between Noname and her followers has obtained tremendous growth and evolved into a burgeoning online community that both literature enthusiast and marginalized demographics can appreciate.

Keona Frasier is a young Black writer with an affinity for all things counterculture and urban. As a woman who embraces the eccentricities and nuances of life, she is dedicated to highlighting these themes in her writing. Astrology, contemporary music, and apocalyptic themed video games are just a few topics Keona loves to spend hours gushing about.