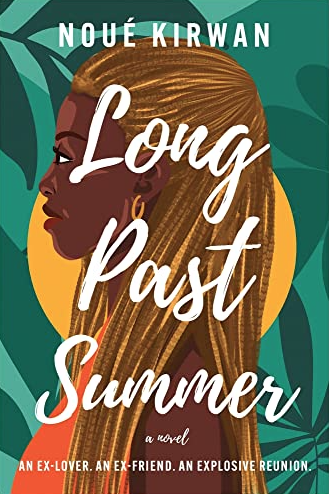 While it’s hard to mourn a relationship, some may argue that it’s especially hard to mourn a friendship. Mikaela Marchand, has been mourning both for quite a while all while trying to meet her life goals. In Noué Kirwan’s debut novel Long Past Summer, we follow Mikaela’s journey of love, friendship, and business as she’s faced with a hard choice between what she wants as a successful lawyer and what she wants as a woman.

Let’s take a look at how Kirwan delivers on those themes.

The story takes place in two different eras in Mikaela’s life. The first is when Mikaela is moving on from high school to university and involves the ups and downs of her relationship with Cameron. The second takes place 20 years later, with Mikaela now in a relationship with her new boyfriend, a doctor whom she is having trouble connecting with, and Cameron is co-parenting with his ex-wife, Julie.

The three are brought back together when a photograph Cameron took of former besties Mikaela and Julie somehow ends up in a famous magazine and Julie sues the publication for using her image without permission. Now Mikaela has to come face-to-face with two ghosts from her past while representing the magazine and working through a harsh work environment where she’s constantly under a microscope.

Starting with the characters, we have three integral pieces of this puzzle: Mikaela, our main character and narrator; Julie, who is Mikaela’s former best friend; and Cameron, who was Mikaela’s first love and is Julie’s ex-husband. One look at that triangle of love and friendship, and you’d think we’re in for soap opera levels of drama. While there is drama involved, Kirwan does a good job of handling these characters and making them actual people with agency and nuance.

It never feels like characters hurt other characters just for the sake of it, and that helps readers connect with them. For instance, all three mains make mistakes and hurt others during the course of the story, but it’s never presented as being out of pure malice — maybe some ignorance and misguided attempts at humor, but not malice.

Speaking of malice, as Mikaela is a Black woman in a cis white male dominated field, she’s faced with what one would expect: microaggressions, misogyny, and encounters that lead to abject frustration. What makes these instances stick out is that Kirwan is willing to not only showcase them but deal with them honestly. For some, this might make the book a hard read, but for those who are familiar with these kinds of bigotry, they ring so true that it’s cathartic in its own way.

Another point is that both Julie and Cameron are white, while Mikaela is Black. This means that even in her own personal life, there’s a bit of self-conscious apprehension. Not only are there differences in how Cameron and Julie are perceived on their own, but their relationships with Mikaela are put under a certain level of scrutiny just by virtue of being interracial.

A good example of this comes early in the book, when Julie and Mikaela are arrested (due to a senior prank involving a football field and both of them running naked while covered in paint). It is narrated in a way that shows Julie almost floats through life with ease, while Mikaela has to always be on high alert and prove herself at every turn.

So the question is, who would gravitate toward this book? Well, with Mikaela as our main character and guide through this story, we’re seeing the story through a distinct lens of the experience of a Black woman. Although this may seem daunting for other demographics, as there are clear themes of racism and microaggressions, these things are important to talk about.

Read with an open mind and don’t be quick to skim over the more uncomfortable social commentary. It’s important to the story and to understanding Mikaela’s experience — as seen both in how the world interacts with her and in how she interacts with the world. There are also depictions of cancer, fertility issues, infidelity, and the loss of a baby. If these things are a trigger for you, be warned.

All in all, Long Past Summer is a story of change, growth, and reconnection — not just reconnection with people lost to time but also reconnection with oneself. Life has a way of throwing curveballs and sending you toward your dreams and ambitions the long way. But if there’s one thing Mikaela’s story can teach us, it’s that we’ll be all right as long as we give ourselves grace and remember who we are.

Kirwan has gifted us with a great debut, and it’ll be interesting to see what other gems she’ll bless us with in the future. You can purchase your own copy from HarperCollins on August 2 or better yet, preorder now to make sure you get your own as soon as possible.