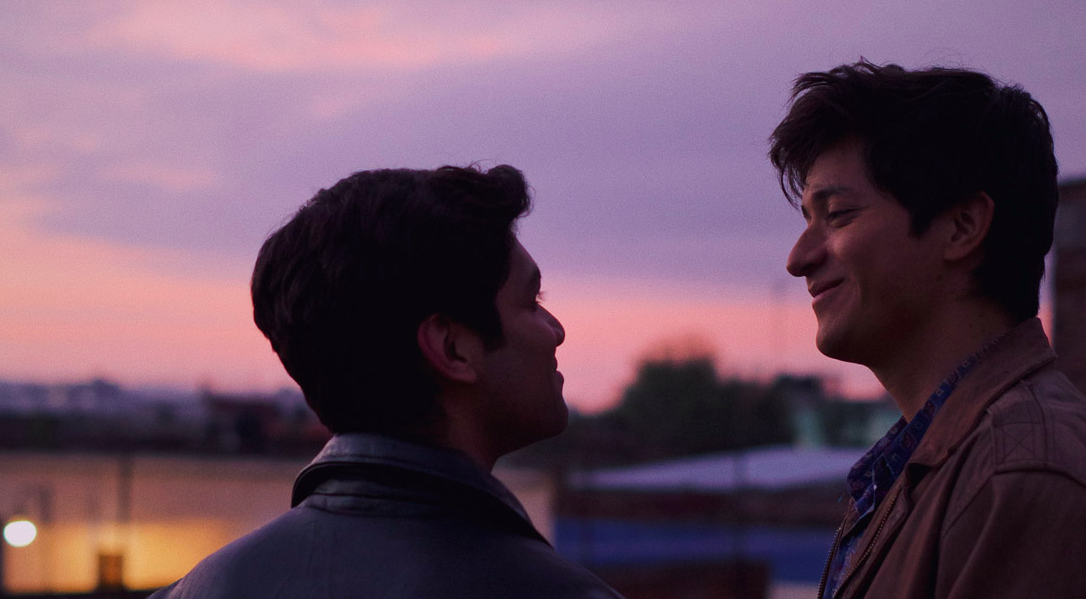 I Carry You With Me (2020) has a story that I think I’ve seen before, but this one has a surprise. Two star-crossed lovers whose love is intoxicatingly heartfelt leaves the audience heartbroken.

This film is filled with grace, beauty, and a deep sadness. A man meets the love of his life in his native homeland, but because of social and economic upheaval, one complication happens after another. He is forced to leave to find a better life. Moments of happiness take place in between; these moments are filled with bliss and ecstasy — the kind of passion that consumes every aspect of your soul, and leaves you wanting more of him. One thing this film does differently is that it allows for a gay story to be told in a way that authentically shows how complicated and hard it can be living in societies that care more about appearances than love.

Heidi Ewing, the director, is a gifted storyteller and writer. Winning awards at the Sundance Film Festival 2020 is evidence of her many talents. I Carry You With Me is a heartbreaking film that explores the love of two gay men (Ivan and Gerardo) from Mexico living in New York. The narrative jumps from the exploration of their childhood, to adult years when they fall in love, to the present time.

This method of telling a story proves to be effective in gearing up the audience emotionally. Both men are played by actors for their younger selves in Mexico. Ivan is played by the fetching Armando Espitia, and Gerardo is played by the handsome Christian Vazquez. Armando and Christian have amazing on-screen chemistry that is felt with every scene they have together. Ewing tells a story that has been told many times before but creates it in a way that reflects the current times, and that is a powerful gift.

The opening scene of the film stars Ivan who is new to Puebla City, Mexico. He has moved in hopes of finding a better job and more prospects. He lands a job working as a dishwasher/janitor but hopes to one day be a chef. Upset at the reality that there is little to no room for that opportunity, he goes out to a gay night club with his best friend Sandra (Michelle Rodriguez). It is here at this club that he meets Gerardo.

This relationship, like many in the gay community, develops fast. Their relationship is dangerous not only because they live in a town that is highly homophobic, but also because Ivan is closeted and has a child from his previous relationship. If his ex-girlfriend ever found out about his hidden passion, Ivan would not be able to see his child again.

Ivan, unable to live a life he wants, decides to make the move to the United States, leaving behind almost every aspect of his life. Sandra and he decide to go together to try to make a better life. After a few years, Sandra decides to go back home where she feels loved, something she was not able to feel in New York City. Gerardo, unable to take the distance between them, tells Ivan that he wants to be with him. Gerado crosses and is reunited with his love. Together they attempt to learn English, live their lives, and experience what life has in store for them.

Once they are together, the narrative jumps to Ivan and Gerardo with actual footage of them and their life in New York. It has been more than 20 years since they left their homeland, and Ivan’s son is unable to get clearance to visit the States. Like many love stories, this proves to be the conflict that test their devotion to each other and their lands.

This film shares the reality of how many Latinos feel about family obligations. The idea of leaving everything behind is at the core of this production. The feeling of being unsure of what location is the homeland really resonates, especially for this writer. These two are no longer in their motherland anymore, living almost in exile, unable to go back for fear of not being able to return to their new home.

Ewing touches on a very special narrative, perhaps by accident or maybe knowingly — she has visibly demonstrated an aspect of Hispanic culture that deserves to be seen. Growing up, my grandmother would worry about me, fearing that I would turn out to be a homosexual. Unbeknownst to me, her homophobic feelings stemmed not from hate, but from fear that my life would be cut short.

Back in her native land, if people found out anyone was gay, they would be rounded up, killed, and thrown down a cliff to be displayed as a warning to anyone else who dared to come out. This memory, of seeing a gay dead man’s body at the bottom of a cliff scarred my grandmother. When she told me this, it all made sense to me. This topic is brought up when Young Gerardo’s father (Nery Arredondo) takes him out of bed and drives him to a field and tells him what happens to people who are homosexuals. This scene is profoundly sad, not based on hate but of fear for their own family. A harder life awaits them if they reveal to the world they are gay.

It is rare to find stories that can authentically capture the LGBT experience in Central America, but this film has managed to do it well, while keeping the audience’s attention. This film explores the reality of many families in the Latino community. From their ideas of homosexuality, to ideas of masculinity and family obligation, this film does a lot to expose its audience to the truth that is hidden from other cultures. Jobs like being a teacher (a professor) or working at a restaurant are seen as women’s work. Having worked in both, to me these comments are too familiar. These are just a few attitudes our culture upholds and weaponizes whenever someone does not meet the definition of masculinity.

Is it possible for one’s motherland to have so much power over one’s choices? For these two lovers, it is. How lands can keep families apart is what this film touches on, but it is also true that our decisions affect our ability to be with our loved ones. Perhaps that is because a part of who we are is rooted in the lands we come from.

There is a lot to consider about this profoundly lovely film. One is that life has a way of surprising you. For these two lovers, they were each other’s surprises. The ideas that this film bring up are powerful. It allows for people who are not Latino to view Hispanic culture in a different way, while also allowing Latinos to question what they are defending and fighting for when they think about their motherland.

NYFF 2020 Review: ‘Lovers Rock’ Is More Than a Film, It’s an Experience