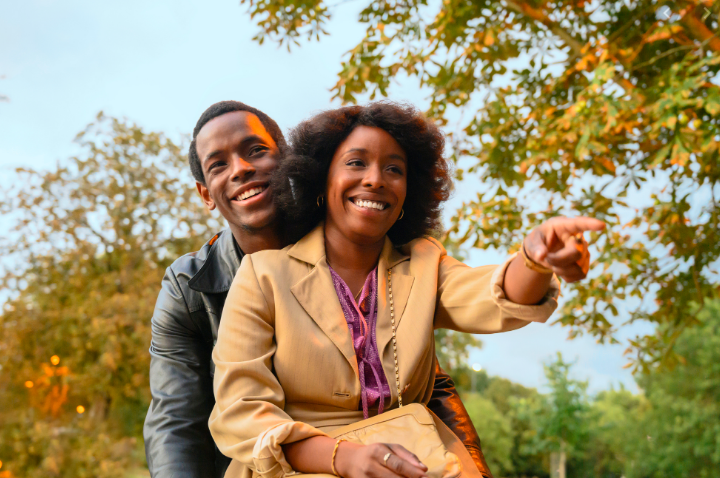 Let me preface this review by saying that Lovers Rock is not your typical film with a traditional narrative, it’s an experience.  It is filled with percolation and energy that bubbles up to the surface within each and every scene. Lovers Rock is part of the Small Axe anthology, which comprises five original films by Academy Award, BAFTA, and Golden Globe-winning filmmaker Steve McQueen (Shame, 12 Years A Slave, Widows). Set from the late 1960s to the mid-1980s,  each of the films tell a different story in London’s West Indian community, whose lives have been shaped and influenced by by their own strength through the adversities of racism and discrimination.

In a press conference about the film, Steve McQueen described the time period of the film as “a very important time in the Black British existence.” The film starts off at a time during a very divisive a racist time in history where many Black British people were not allowed in white pubs and dance clubs.  They had to create their own safe spaces and many turned to house dance parties as an environment to relax, socialize, feel empowered and, perhaps, meet their future soulmate. What Lovers Rock does and what McQueen shows us through his visceral storytelling is what these moments look like in this most intimate way. As the viewer, we are like a fly on the wall at these events absorbing every conversation and seeing every private moment as it’s happening.  As the camera meanders room by room, each room tells its own story and it is not really up to us to decide what the plot or story arc is here, we are simply just an observer in that moment.

With Lovers Rock, everyone gets a glimpse into the Black experience, up close and personal.

The film also takes you through a whirlwind of experiences, from moments of joy and celebration as women cook and sing as they prepare for future festivities to moments of fear as we witness a sexual assault unfolding before our very eyes.

The Black British and Jamaican dialect also plays a part in this film and is almost like a character itself in the story as it helps to illustrate the diversity of the Black diaspora at these dance parties but also how it relates to social standing and class.

When asked about the distinction of dialect in the film Michael Ward, who is of Jamaican descent says, “I’ve got some family that was over here from before, and a lot of my family was the latter of coming over, but it was still quite relatable for them, just not having opportunities and being around people that never really wanted them there. So it was just finding the truth in that and seeing how I can kind of communicate that as well.”

With respect to code switching, McQueen says that it’s in his DNA. “You speak to a friend or spouse or a family member in a certain way that you speak to your schoolmate who happened to be white English in another way. That was just how it was. It was like different languages rather than accents.”

The ritual of dance parties is as old as time in the Black community, but will likely offer a bit of a unique perspective for some audiences seeing it in the setting of West London. As viewers experience Lovers Rock as they sway back and forth to their favorite jams like Carl Douglas’ “Kung Fu Fighting”. And while Lovers Rock does provide a mini-narrative of the two protagonists Martha (Amarah-Jae St. Aubyn) and Franklyn (Micheal Ward) our two star-crossed lovers who meet at this party and connect, it is what happens around them that tells the bigger story.