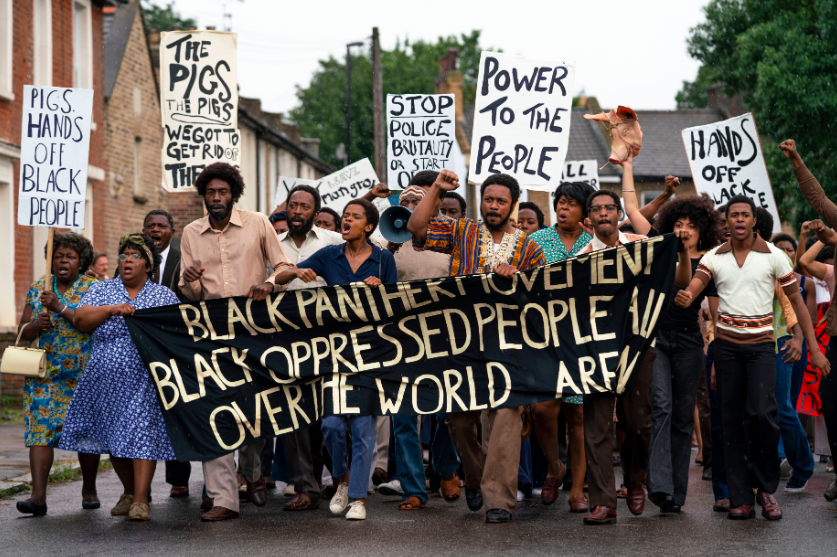 They say some things never change, and watching Steve McQueen’s Mangrove shortly after hearing the Breonna Taylor verdict was certainly a tough day.

As Martin Luther King Jr. once said, “Injustice anywhere is a threat to justice everywhere.” That is the core theme to the very fabric of our fight as Black Americans today, and it is the same fight depicted in Mangrove, set in 1960s Notting Hill, London.

McQueen has developed five films, known as the Small Axe anthology, that scrutinize racial discrimination in London’s West Indian community during the 1960s to 1980s.  The sad irony here is that although the time period for these stories is decades ago, it could easily run in today’s headlines and still be relevant.

Based on a true story, Mangrove explores the life of Frank Crichlow (Shaun Parkes), who owns a West Indian restaurant in London’s prestigious Notting Hill. As the owner of one of the only Black-owned businesses in the community, Frank finds himself a target of police harassment in the form of relentless raids. There are even moments where innocent people in the cafe are attacked by police while eating.

While Mangrove was a restaurant, it was also a makeshift hub for community activism.  Friends and colleagues of Frank’s are racially profiled and stopped by police in the middle of the street for no reason whatsoever. The only excuse the law enforcement can offer is that “they fit the description.”

And the only way we have ever been able to get things done — even today in 2020 — is to take it to the streets in the form of peaceful protest. Nine men and women, including Frank, leader of the British Black Panther Movement, Altheia Jones-LeCointe (Letitia Wright), and activist Darcus Howe (Malachi Kirby) form an alliance to amplify their voices to ensure they will be heard.  However, they are arrested and falsely charged with incitement to riot.  As a result, a highly publicized trial begins, and the battle for these freedom fighters is just getting started.

Mangrove was co-written by Alastair Siddons (Tomb Raider, Trespass Against US) and Steve McQueen.

There’s no denying the fact that, after seeing countless atrocities perpetrated by police against Black people, watching Mangrove may be triggering for some. If you have ever been racially profiled, harassed, or abused, or even witnessed these acts on the 24-hour news cycle showing these images on a loop like glorified torture porn, Mangrove may be a disturbing watch.  However, these are true events. McQueen is unearthing a story that is mostly unknown, even in the UK. And there are elements to the story that we come to learn in the final act of the film that give the viewer some comfort for the pain experienced in the first part of the movie.

Executive producer Tracey Scoffield explains, “One hundred and fifty marchers turned up and 300 policemen, which gives you some idea of what the police thought of the whole thing.”

These protests in the Notting Hill community are a blueprint of what we are seeing happening today all over the world. Currently, in the United States protests against police violence and harassment against Black Americans are happening right before our eyes, which is why Mangrove is proof positive that history truly does have a way of repeating itself.

Letitia Wright delivered a distinct Trinidadian accent that is executed beautifully. One can tell this distinction by the melodic tone within her inflection of their vernacular. There are different sounds to play with, and Letitia was a natural.

If you’re into courtroom dramas, the trial scene that takes over three-quarters of the film is quite engaging. It’s also reminiscent of another courtroom drama due for release soon about protestors charged for rioting, The Trial of the Chicago 7, directed by Aaron Sorkin.

While Mangrove is a tough watch since it explores police brutality, harassment, and racial profiling up close and personal, it is an educational experience and a lesson in how ugly our history is with respect to criminal justice and humanity. The only way to avoid the mistakes of our past is to see what society did wrong and avoid repeating it. Unfortunately, the world still has a lot to learn about racism. Perhaps the story of Mangrove will at least enlighten viewers a little more about how much of a stain white supremacy has been on humanity. By watching this story, paralleled with reading today’s current headlines, viewers will understand why these stories still have to be told.

Campari as an official sponsor of the New York Film Festival.