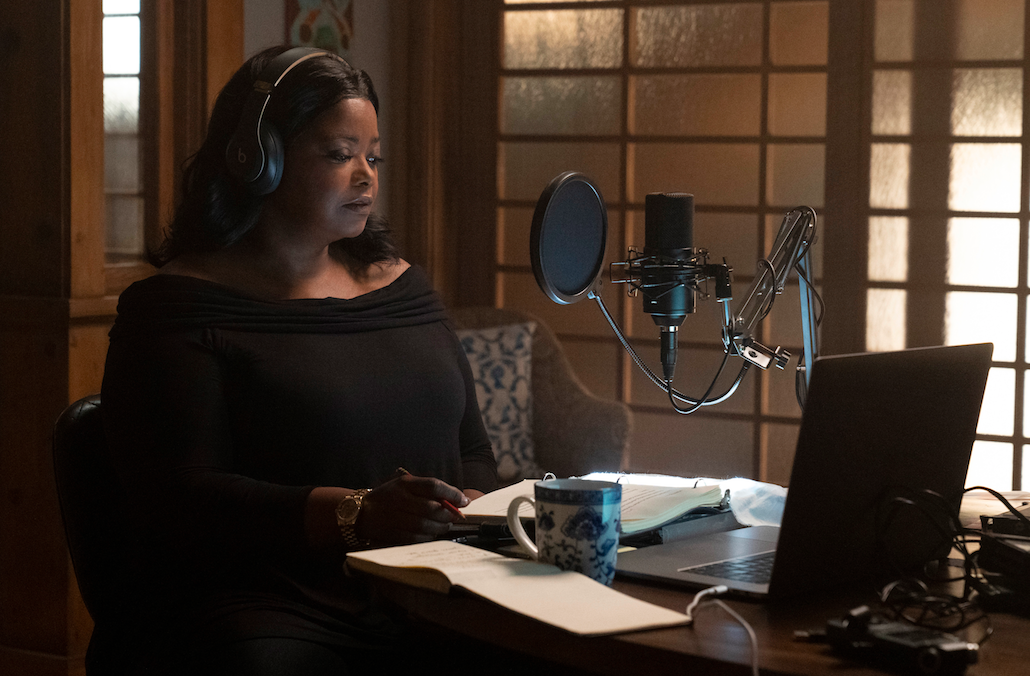 Based on Kathleen Barber’s novel Are You Sleeping, when new evidence compels podcaster Poppy Parnell to reopen the murder case that made her a national sensation, she comes face-to-face with the man she may have mistakenly helped to put behind bars. This compelling drama exposes a unique view into America’s obsession with true crime podcasts and challenges its viewers to consider the consequences when the pursuit of justice is placed on a public stage.

BGN had the opportunity to sit down with Octavia Spencer to discuss her role as Poppy, her experience with listening to true crime podcasts, working with Aaron Paul, and her affinity for solving puzzles.

Can you briefly tell our readers who Poppy Parnell is?

Poppy is a world-renowned journalist who now has a podcast, and she is litigating her very first case — the case that started her career. It centers around a teenage boy from an affluent family who is sent to prison, and she comes across some evidence that may lean towards his innocence.

Poppy has a pretty complicated journey ahead of her. As the viewer, we’re not sure if she’s making good choices or poor choices here. How do you feel about Poppy’s decisions throughout the story?

Poppy is a human being. We all try to make good decisions, but don’t necessarily know how those decisions will impact other people or our own life. I think she does things on the spur of the moment, and she makes impromptu decisions that are not well thought out sometimes. I don’t know that they’re poor decisions, but sometimes she doesn’t think things through.

You read so many scripts, what was it about this script that caught your attention?

Well, it was a book actually, that I read for its source material, and then meeting Nichelle [Tramble Spellman] at the center of the book. The podcast was the center of the book. We made the story around the podcaster. That’s the world we haven’t seen. I’m a person who enjoys procedural things, whether they’re medical or law enforcement-based. To see a procedural show, based on a journalist or a podcast, was so very exciting.

Some of the best scenes were the moments with you and Aaron Paul, what what was your experience like working with him?

Well, Aaron and I have known each other for years, and I’ve always been a fan of his work. He was at the top of everyone’s list. I was hoping since he was the first choice that he would come on board to play with us. He did create this unique character, unlike any performance he’s ever done. He gave us a bone-chilling, yet very empathetic Warren Cave. Poppy doesn’t work if you don’t feel something for Warren.

I don’t want to say a specific thing because of spoilers. There are quite a few things that stick out with him. I’ll just say our initial meeting because it is quite explosive. And it’s indicative of what the journey is going to be with him. With Warren, you don’t know what you’re going to get, and it was exciting to play with Aaron that way.

True Crime podcasts are all the rage, especially after Serial blew up. Were you a podcast listener of this genre before you got attached to the project?

I have listened to a couple of podcasts, Serial, which had been at that time the only podcast that I listened to, and then someone told me about S-Town and I listened to that. But I actually watch a lot of true crime shows and case studies for the FBI for their behavioral science unit. So it’s not foreign to me at all.

It was recently announced that you’ll be honored with the Producers Guild of America Award. Congratulations.

You’re also a producer on this series. You have several projects under your own company, including the Madam CJ Walker story and the Coffee Will Make You Black adaptation. How has your work as an actor prepared you for what you are doing now?

Oddly, I wanted to be a producer before I wanted to be an actor, but finding projects and putting them together as a newbie was more of a daunting task. Acting opened the door to my first love, which is puzzle solving. That’s what I think producers do. They find great material and put the right people in the positions, and it’s just like solving a puzzle from the script to all the different departments and teams. I felt like it was a natural progression for me.

That’s interesting that you liked puzzles. Here at Black Girl Nerds, we love nerdy things. Would you say that something you’ve always been interested in when you were younger was solving puzzles?

I’m dyslexic. What kept me reading and allows me to have a very vibrant reading life and career was my second-grade teacher Miss Bradford — she’s still my favorite — who introduced me to the Nancy Drew books. She always told me you don’t know what is going to be a clue so you have to read everything. I wouldn’t allow myself to disengage; I had to read every single word and know every single detail, and that’s how my brain works. Now, it just ties everything from point A to point B. I’m that person who if I lost something, I’m going to find it because I backtrack quite well.

Going back to your work as a producer on this series, did you lend any creative insight to your character or to the story while working on Truth Be Told?

Absolutely. Nichelle Tramble Spellman, our show’s creator — we bonded in the room because she and I both have an affinity for true crime and literally had very similar stories where she and some of her siblings would be watching a program and our parents also were into it. We laughed because it was like, wow, we were probably separated at birth in our appreciation for the true crime genre. This is my field actually; it’s one thing that I know a lot about. The thing that I didn’t know about was the podcasting. And journalism as a whole.

I know you have so much going on and so much on your plate, but what’s next for you?

Dr. Dolittle comes out next, and then after that Onward, and then after that Madam CJ Walker. I’m filming something right now, Thunder Force, a superhero comedy with Melissa McCarthy. I feel very blessed every day that I get to do what I love doing and that anybody wants to watch it.

Out of all of them, I’m really excited about Madam CJ Walker. That is one story that I’ve been looking forward to.

I think it’s unreal that only the Black community knows about it. I think it’s time, especially with these young kids, and especially with what we’re going through society right now. The fact that this woman was the first self-made millionaire, not female millionaire, not Black self-made, but first female self-made millionaire, without it being a legacy or inherited is profound. She did that post-slavery. It’s a testament to what we can do. I think now more than ever, her story needs to be out there, and I’m excited to be a part of it.

Truth Be Told is available for streaming on Apple TV+ December 6.