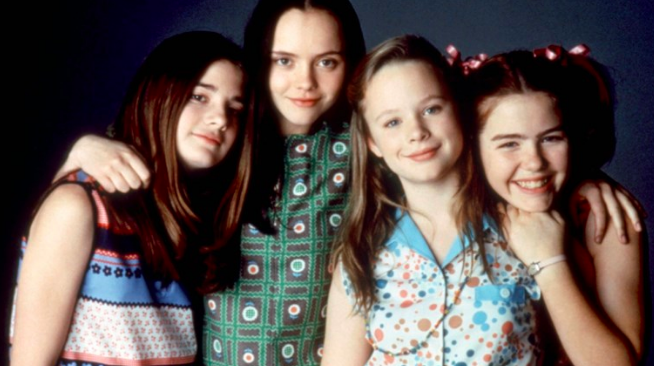 Two and a half decades later, they kept their pact in Lesli Linka Glatter’s coming of age classic Now and Then, celebrating its 25th birthday this year, exactly the same length of time between the girls’ pact and their reunion in the story.

“All for one, and one for all”: four young best friends Samantha (Gaby Hoffman), Teeny (Thora Birch), Roberta (Cristina Ricci), and Chrissy (Ashley Aston Moore) promised to always be there for each other during the summer of 1970 and beyond, no matter what.

Chrissy (Rita Wilson) never left their hometown of Shelby, Indiana, and now expects her first baby in the house she keeps exactly the same as her hippy dippy mother did, right down to the plastic on the couch. Tomboy Roberta (Rosie O’Donnell) also stayed in Shelby, becoming the town’s OB/GYN as well as baseball coach. But Samantha (Demi Moore) and Teeny (Melanie Griffiths) fled small-town Indiana for the coasts and found creative success as a novelist and actress respectively. They’ve all grown up and in many ways also grown apart, but they are still bound by the fateful events of that summer of ’70 that changed each of their lives differently, but well into adulthood.

Often referred to as the Stand By Me for girls — a most superficial comparison that in lots of ways cheapens both films, watering them down to gender stereotypes — Now and Then has its lighthearted moments of comedy as the girls’ adventures unfold. But when watching the movie as an adult, its darker themes float right to the surface in sometimes painful ways.

The most dramatic aspect watching this again as an adult after not having seen it since 1995 was how much more intensely the adult traumas resonate with me now rather than back then. The response of Samantha’s mother (Lolita Davidovich) to her divorce is super badass, especially considering 1970 was not an era when being single and divorced as a woman was an acceptable life choice.

But worse, the “Crazy” Pete Simms and Dear Johnny storyline hits home in a wholly different way in 2020 than it did 25 years ago. In Now and Then, the four friends often conduct seances in the local cemetery. One day, they cast a spell that they think has awakened the ghost of young Dear Johnny, who died in 1945 when he was a pre-teen. As they spend that summer investigating how he died, they eventually find out that Johnathan Simms and his mother were murdered in a random robbery by a drifter passing through town one night. Adults would immediately think of the parallel real-life events that Truman Capote immortalized in In Cold Blood, which detailed a similar home invasion and murder spree that took place in 1959.

As Samantha finds out, “Crazy Pete” was Dear Johnny’s father, and because these kinds of violent crimes disrupt the collective sense of small-town safety, Pete was essentially ostracized by the entire community since he was the living reminder that even in Shelby horrible things could happen. Because of this, Pete only comes out at night and continues to stew in his guilt for not being home when his wife and son were getting killed. “I don’t want to see a lot of people, and a lot of people don’t want to see me,” he tells Samantha through a voice thick with unresolved grief. For us watching Now and Then at home after all these years, by now we have our own adult traumas and lingering sorrow. I never related with Pete so much as I did watching Now and Then as a grown-up.

It was also surprisingly emotional watching young Roberta and young Samantha deal with their childhood traumas as they were happening. Roberta’s faked death attempts as she tried to process her grief over losing her beloved mother are absolutely chilling, even as she tries to make them funny. And watching Samantha start to emotionally wall herself off at just 12 years old on account of her parents’ constant fighting and ultimate divorce is absolutely wrenching. Seeing Teeny’s neglectful parents turn her into a cynic about everything from life to love even before she’s a teenager feels much more like a dagger now than it ever did watching Now and Then when younger. Chrissy’s arrested development and growing puritanism thanks to her mother’s bizarre sex talk also hits home much harder as an adult. By now, we’ve seen the impact of our own childhood traumas, and as adults, we can probably even trace them to huge events just like the four girls can with the summer of 1970.

But arguably one of the most powerful aspects of Now and Then as an adult is how the four girls made a promise to each other, and amazingly managed to honor it decades later, even in the days before social media. I remember watching Now and Then with my own circle of best girlfriends back in the ’90s and being certain this would always be the story of us too, no matter how many years and miles would separate us. Sadly, as is the case for many adults, after 25 years all those promises and all that unconditional faith in those childhood friendships dissipates in the cold hard light of adulthoods that ended up having other plans for our lives. It’s also sobering to have the adult thought that not everyone has the resources like Samantha and Teeny to drop everything and fly home for a long weekend.

Thanks to social media we can still wish each other happy birthday and celebrate milestones like births and career wins from afar, but it’s certainly nothing compared to adult Samantha, Roberta, Teeny, and Chrissie sitting in their treehouse, still connected physically and emotionally, even if they might not actually like each other or agree with the others’ choices. It’s magical, but also melancholy as an adult revisiting an imaginary adulthood embodied in Now and Then that didn’t actually play out the way I had expected my own to follow.

Pete Simms tells Samantha, “Things will happen in your life that you can’t stop. That’s no reason to shut out the world.” And adult Samantha later meditates, “Although I understood the importance of his words, it’s only now looking back that I understand their meaning.” This entire exchange couldn’t ring more true watching Now and Then all these years later, and it’s a message I wish had stuck with me closer back then. Like Samantha eventually admits, and reflecting on my own experiences since the first time I saw Now and Then in 1995, I also would have made many different choices too if I’d remembered this valuable piece of advice.

“The treehouse was supposed to bring us more independence. But what it actually did was bring us independence from each other,” older Sam says about their meaningful summer of ’70. But 25 years later, that same treehouse brought these four old friends all back together and started their next 25 years with a new promise to each other. For those of us not similarly blessed, we can still live vicariously through Samantha, Teeny, Roberta, and Chrissy. “Truth or dare?” they continued to ask themselves into adulthood. Like them, let’s all choose truth, too.

Review: ‘C’mon, C’mon’ is a Little Movie with Big Themes