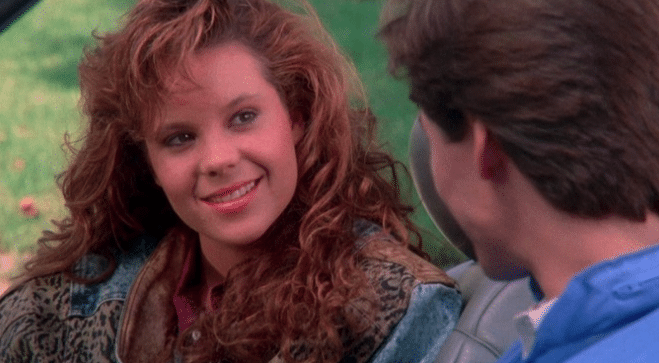 It’s been 30 years of Teen Witch, a film so terribly and unironically campy it has only gained in cult status over the years.

“You will receive these powers on your sixteenth birthday,” Madame Serena (Zelda Rubinstein) intones to Louise Miller (Robyn Lively) during a psychic reading where dorky Louise finds out that it’s her destiny to be a real-life witch. At first, Louise dismisses Madame Serena as a crackpot and thinks nothing of it. That is, until after her birthday and the strange things that Serena predicted start happening. Including finding a magical amulet that boosts her new powers. Louise discovers that she can suddenly control people with just her wishes and words, and finds herself back at Madame Serena’s to learn more about this new gift.

After Randa (Lisa Fuller), the most popular girl at school, sabotages Louise’s birthday party with a party of her own, Louise decides her first attempt at casting will be revenge on her classmate bullies. A truth spell may not sound like much, but when wielded against the most popular girl and her minions it becomes powerful indeed, undermining Randa’s position as Queen Bee. 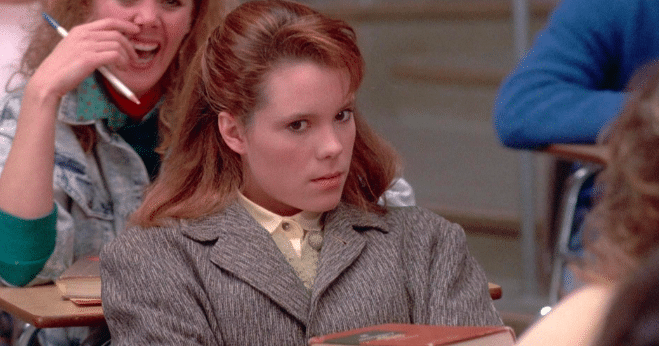 It’s not just the popular kids who bully Louise, it’s also her teachers. Because she skipped a grade, her sadistic English teacher Mr. Weaver (Shelley Berman) torments her publicly in class and on the regular. After one particularly heinous bout of verbal lashing in which he showed the class the entire contents of Louise’s purse — including mocking her birth control pills — Louise casts once again for revenge. She makes a representative doll of Mr. Weaver and puppeteers him into an unwilling striptease in class. And then some. 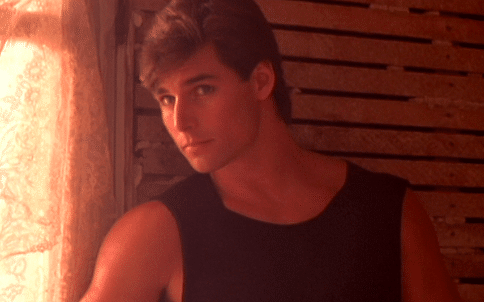 But really, what Louise wants is not just to date the hunky captain of the football team Brad Powell (Dan Gauthier), but also to be the most popular girl. At school, and in the world. With her literal soul-sister Madame Serena’s help, Louise casts the mother of all spells and gets her wishes. Both of them. As Louise solidifies her status as the most popular girl with the affection of dreamboat Brad, she begins to have second thoughts. Are all these people actually liking her for her even in spite of her spells? Or is it all just a lie? For young wannabe witches like me in 1989, Teen Witch was a positive gateway drug into the craft. At the same time, Louise’s regrets made me actively think twice before wishing for huge things that seemed out of my grasp, including power. Even 30 years later these considerations continue to resonate with me.

“What’s the matter? Glass slipper doesn’t fit?” Louise’s dad (played by Bewitched alum Dick Sargent) asks her as she considers the actual consequences of the kind of life she wanted and now has.

While Teen Witch is firmly a comedy, it tackles many of the issues we see in coming-of-age-horror movies. A young character’s body changes through puberty and their transformation is often complicated and monstrous. If Louise got sorted into a Harry Potter house she would go straight into Slytherin. She’s messy, shrewd, and has a deep cruel streak that magic only compounds. She abandons her best friend Polly (Amanda Ingber) the moment she metamorphoses into Ms. Popular. Louise makes what seems to be a benevolent move in helping her favorite teacher Miss Malloy (Marcia Wallace) win the lottery, but really she did this so that Miss Malloy would put her in charge of the school play. The school play that bodacious Brad happens to be starring in. This is aside from the intricate and manipulative spell that she cast on her entire town to make them love and worship her. All of this is presented through comedy, and song and dance, but the sinister undertones are obvious. 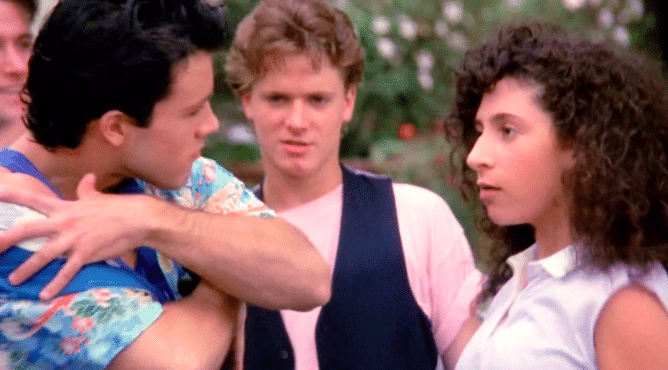 But arguably my favorite thing about Teen Witch after all these years, besides Polly and Rhett’s (Noah Blake) absurd rap battle between who is better at cultural appropriation, is how multilayered the main female characters really are. Both Louise and Madame Serena embody the entire Judeo-Christian trifecta of Virgin, Whore, and Crone. They both appear and behave in a childlike manner, yet their sexual appetites are healthy for women of both their ages. And of course, seeing that they are both witches closes out their character development. 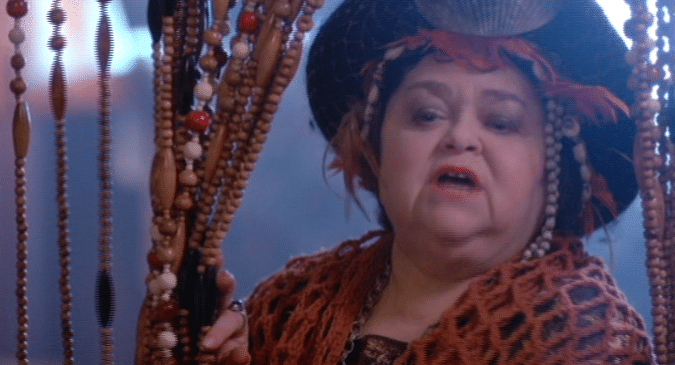 Taking these archetypes into Jungian territory, both Louise and Madame Serena embody 10 of Jung’s 12 archetypes. We can see The Ruler, Creator/Artist, Sage, Innocent, Explorer, Rebel, Hero, Wizard, Lover, and Caregiver as they take turns stepping forward in Serena and Louise’s journeys, both separately and together. And the remaining two, The Jester and Everyman, are salt and peppered through the rest of the film in other characters such as Louise’s bug of a little brother Richie (Joshua Miller), Mr. Weaver, Rhett, Louise’s dad, and even Louise’s terrible date David (Jared Chandler). It’s really fun to watch Teen Witch as these various archetypes pop up one by one and around again as the story unfolds.

This isn’t to say that Teen Witch is not without some problems, though. The plot holes are strangely gaping. Like, what happened to David after Louise made him disappear? Why was the tub already filled with water after Louise accidentally turns Richie into a dog? Why are the play auditions, unlike any play auditions that have ever taken place, including announcing casting on the spot? How does everyone know the steps to the dance at the end? Oh, 80s movies and your sexy, sexy saxophones. Y’all were a singular kind of beast. 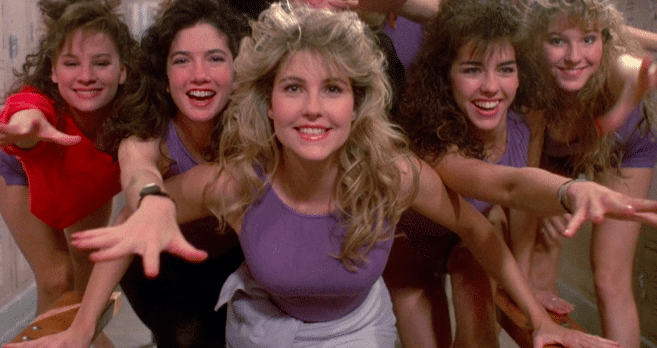 I also couldn’t help but be disturbed by the performative heterosexuality in the popular girls’ new cheerleading song, “I Like Boys”, sung by girls to other girls in their own locker room. Methinks the ladies doth protest too much. And it’s irkworthy how Louise goes to all this trouble, and the last of Serena’s powers to boot, for a spell she then debates undoing. Privileged much, Lil’ Miss Teen Witch? But still, I can’t help but love this film.

Teen Witch continues to be a fun journey through archetypes and the 80s camp that’s singular to romantic comedies of that era. It’s also a powerful reminder that being ourselves and accepting who we are can be a powerful magic of its own. “The real magic is believing in yourself. If you can do that, you can make anything happen,” Madame Serena says to Louise as she considers reversing her enormous spell.

Robyn Lively is still a working actor and is due to appear in Hulu and Blumhouse TV’s ninth installment of Into The Dark, “They Come Knocking,” beginning June 7th.

Louise’s dad’s advice is also evergreen: “…It doesn’t really matter how other people see you. It’s how you see yourself.” The message of using our personal power to be the best version of ourselves is vital. So is accepting who we are after we make huge personal transformations. Teen Witch also complicates what feels like straightforward notions of love and happiness and the lengths people go to in order to get them. In these regards, as dated as Teen Witch may be, its core lessons remain timeless. Top that.

Everything You Need to Know About ‘Siempre Bruja,’ Netflix’s New Teen Witch Series