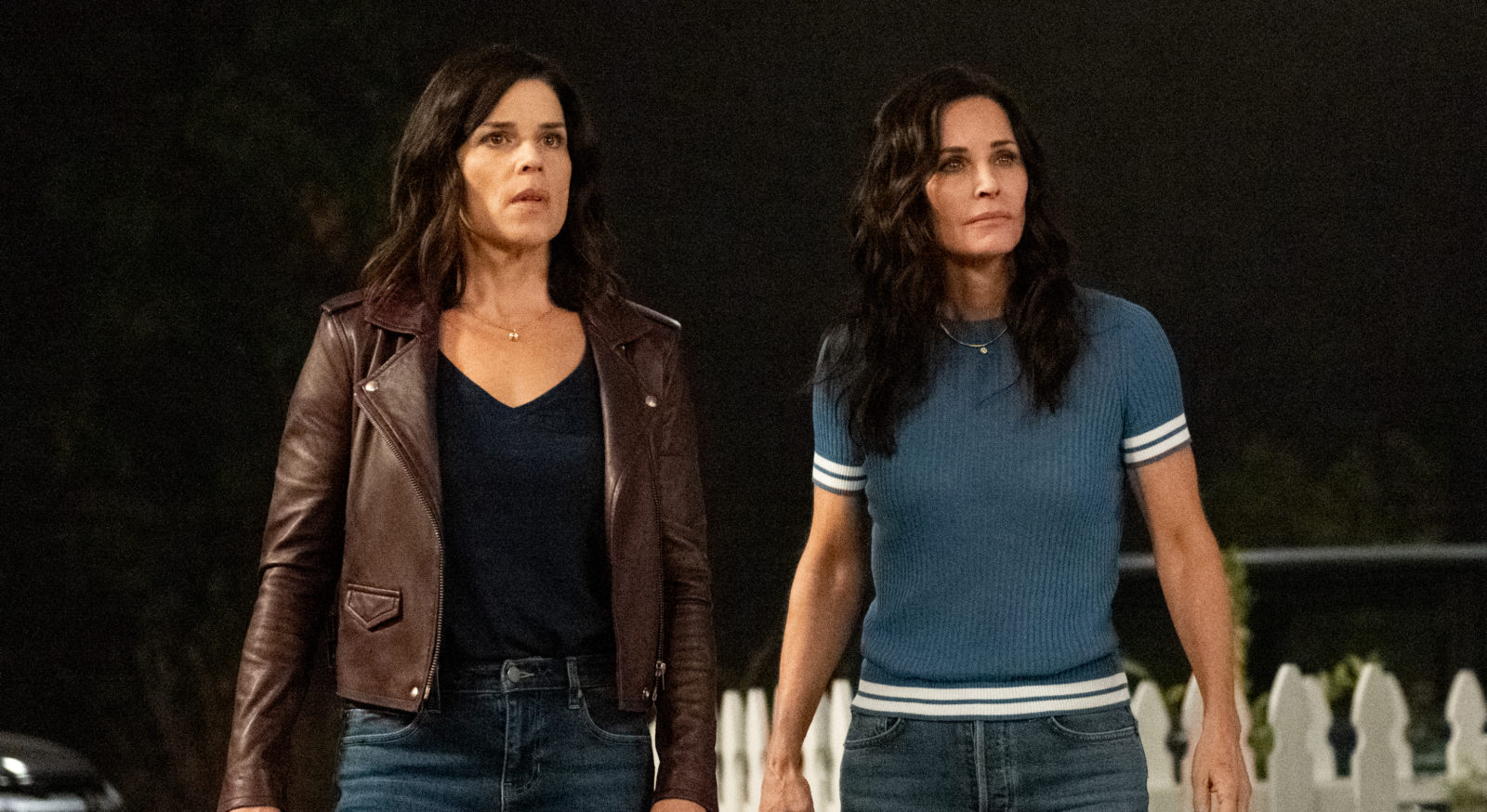 Scream is one of the most iconic horror franchises, and BGN is super excited for the latest installment. Scream (2022), the fifth film in the Woodsboro saga, will star the original cast but is hitting all the marks so far with a new racially diverse cast as well. A lot has happened in the nine years since the last Scream film, including the loss of Wes Craven, the original director of the first four films.

While details are pretty hush-hush on the project, the film will follow a woman returning to her hometown to find out who has been committing a series of vicious crimes. Scream is directed by Matt Bettinello-Olpin and Tyler Gillett of Radio Silence Products. The cast includes originals Neve Campbell (Scream, 1996) as Sidney Prescott, Courteney Cox (Friends) as Gale Weathers, David Arquette (Never Been Kissed) as Dewey Riley, and Marley Shelton (Bubble Boy) as Deputy Judy Hicks. New to the cast are Jenna Ortega (You), Jack Quaid (The Boys), Dylan Minnette (13 Reasons Why), Mason Gooding (Booksmart), and Jasmin Savoy Brown (The Leftovers).

BGN got a chance to sit with the cast in a roundtable session during filming to discuss the movie. While lips were sealed, we got a few details about Scream and got to know the cast a bit more.

On the first queer character in Woodsboro…

Jasmin Savoy Brown: What’s cool is there wasn’t a long conversation, meaning they had already written the role of Mindy and she was queer. When I came on they said, “We trust you. Whatever you want to do. We agree.” So that’s come down to wardrobe choices and just my presence and my existence. This character is enough because the writing and the directing don’t make a thing of it. I am just a person who happens to be queer, which we need to see more of on screen. It’s extra cool that it’s a woman of color, a queer woman of color. I think the queer community will be happy. I’m happy. This is a project that has always been so female-focused, with so many badass women leading the charge. To get to come on board with a character who is queer and out is really cool.

Mason Gooding: The most meaningful shit ever. Paramount seems to clearly want the absolute best for Scream and the franchise itself, in that every decision made is considered; how can we bring in a new fresh audience, while not alienating the tried and true fans, and also, making it feel modern while also having a tinge of retro, sort of an homage that you would come to expect from another installment to such a prolific franchise.

Dylan Minnette: A few years ago, I feel like it was the first time I realized that Scream is in my top five movies of all time. I love how meta it is, how self-aware it is, and how much of a love letter it is to the horror genre. It’s an effective horror thriller. To be a part of this, to be a part of something that so perfectly encapsulates what everyone fell in love with about the franchise, in the first movie anyway, and to be in the same movie as the original characters, it’s just a dream come true.

For the original cast, what made you stick around for four, now five, movies? It rarely happens, and it’s been almost 25 years.

David Arquette: Yeah, I think it goes back to Kevin Williamson and Wes Craven. They made a film that changed people’s opinions and opened up this new world of going beyond just the film to talking about pop culture and having an understanding of the audience that’s watching. I believe it was a game-changer in a way that it took it in a new direction of storytelling for this series. It’s really exciting. This new version of Scream is going to be just building on all of that. We’ve learned so much within the last 10 years. Technology has advanced so much that it’s turning it up even more, in my belief.

Marley Shelton: You know, I was thinking about that. I think part of it is the connectivity that there is an origin story, that each installment has some connection to the last one so that it’s almost like weaving together this tapestry, and I think that makes audiences more invested. Then, as a cast member, and I can’t speak for Courtney and Neve and David, but I think Wes did such an incredible job of making everyone’s storyline fresh and new each go-round that for an actor, it just continues to be a cool job.

What was it like coming back to the franchise without Wes Craven?

DA: Oh man, there’s not a lot of films that I have been a part of that span 24 years, 25 by the time it comes out. So, it’s been very interesting. I mean it’s incredibly sad not having Wes here. It’s bringing up a lot of emotions. I’m listening to a lot of songs that I listened to during the first film and even the last film. There’s an element of me watching my life in 24 years, especially the fact that I’m working with this incredible cast, and there are so many tremendous actors. To see them and to see me in them when I was younger was an interesting experience that I’ve never quite had on a film before.

MS: Wes was/is the master of this genre. He broke so much ground in terms of creating the specifics of the Scream genre, which is this amazing balance of humor and terror. It’s self-referencing and cool. All of these amazing elements work together and are wildly entertaining. It’s a tall order to continue that legacy without him at the helm, but I do believe in Matt and Tyler. They are the perfect guys for the job as directors, and Wes would be very proud of who’s been chosen to take on this legacy in terms of Matt and Tyler. He’d be tickled. He’d be delighted that we were continuing with Scream and what he started.

On the cultural popularity of Ghostface…

DA: Oh man, it’s pretty funny. I did some westerns, and whenever you do a western you just feel like a kid again because it has horses and guns. It’s similar to the Scream movies. You’re part of this world. It’s funny seeing these young actors and their connection to the films and then doing scenes with them. It’s funny to see how excited they are and how much they love it. They’ve been watching a bunch of horror films and brushing up on all their old things. That was something that helped me when I was doing my first film, watching films that Wes had suggested. So it’s cool that they’re really in it. Aside from just being tremendous actors, they’re fans of the films, and I think that’s something that connects us all.

Jack Quaid: I have a very vivid memory of being a little kid trick-or-treating for the first time. It was around the time when the first Scream came out, and I saw so many people dressed up as Ghostface. I remember being absolutely terrified. [One] kid with the Ghostface mask had a little thing you could pump, and blood would run down the plastic and would kind of recycle. I remember being four and so scared. It was so weird, how it all started for me, just being scared. That hasn’t changed. I’m still very, very terrified.

Jenna Ortega: I think because it was everywhere, I wasn’t too terrified of it until I came onto this set. Once I came onto the set and I walked into the soundstage. I saw a Scream sign with Ghostface, and all of a sudden, I’m like whoa, he’s here right now, like this is the real thing. It became very real all of a sudden, and because you never know who’s under that mask, it’s like the eeriest, uneasy feeling that I get in my throat every time I see his face on our productions, it’s weird.