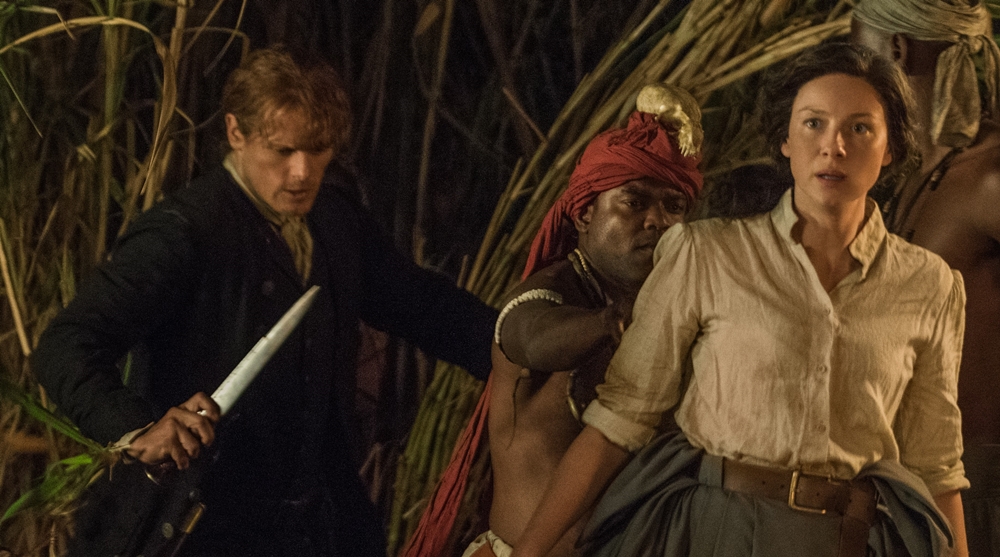 This season of Outlander is over, and the book Voyager has come to a close. Outlander season three took its fans of color on one hell of a ride, from the relationship with Joe Abernathy Claire’s Black doctor friend to the slave dancing foolishness in the season finale. Throughout each episode, I sought a reason for the reckless abandon that the writers and showrunners used in portraying the POC characters. Finding none, I wrote about the dissonance, the racial deafness, the utter White nonsense that seemed to propel the season forward into episodes that revealed a piece of racist fresh hell that seemed created to top the shenanigans of the previous week.

Each review was met with fierce defense by the white middle-aged people that occupy most of the Outlander fan space. However, I also heard something else, voices that seemed to pick up steadily throughout the season. They were the voices of Black women who came to the series as fans and were now feeling betrayed by their own fandom. As I reflect on the season three and look forward to season four, I am forced to ask myself is it time to part with the Outlander series?

One of the things that I constantly heard from White fans was that I should read the book before commenting because the book is much worse. The state of the original source material does not erase any of the racist dog whistles that are blown throughout season three of the show. In fact, I listened to all the White women telling me to “read the books and then you’ll see how it all makes sense” and borrowed a copy of Voyager by Diana Gabaldon. Reading her work after seeing the series did lead me to a few conclusions that I would like to share with the White middle-aged fandom that has challenged my words for half the season.

Why is it that Black people are so comfortable with the fact that an artist can create amazing things but have flawed or downright horrible ideas about race? Because we had to deal with our famous faves being “racist” long before the word carried negative connotations in White America. We can tap our feet to the music, or spend a rainy day enjoying the words, all the while remembering that this beautiful piece of art was created by a flawed, human creator. The two can be separated.

These conclusions are what I hope you will read and consider as we all wait, speculate, and anticipate any new tidbits on the fate of the Frasers in Season 4. Yes, I will still look for and report on the dissonance and tone-deafness that will be present in the next season. We all must talk about it in order to ever have a chance of changing it. Furthermore, the Black women who love the franchise deserve a space to voice their concerns over these issues. I would be naïve to hope that Gabaldon and the showrunners employee some POCs to consult for the future of the franchise. In lieu of that, I’ll still be there with the rest of you, watching the premiere of Outlander season 4 like my four-year-old on Christmas morning.