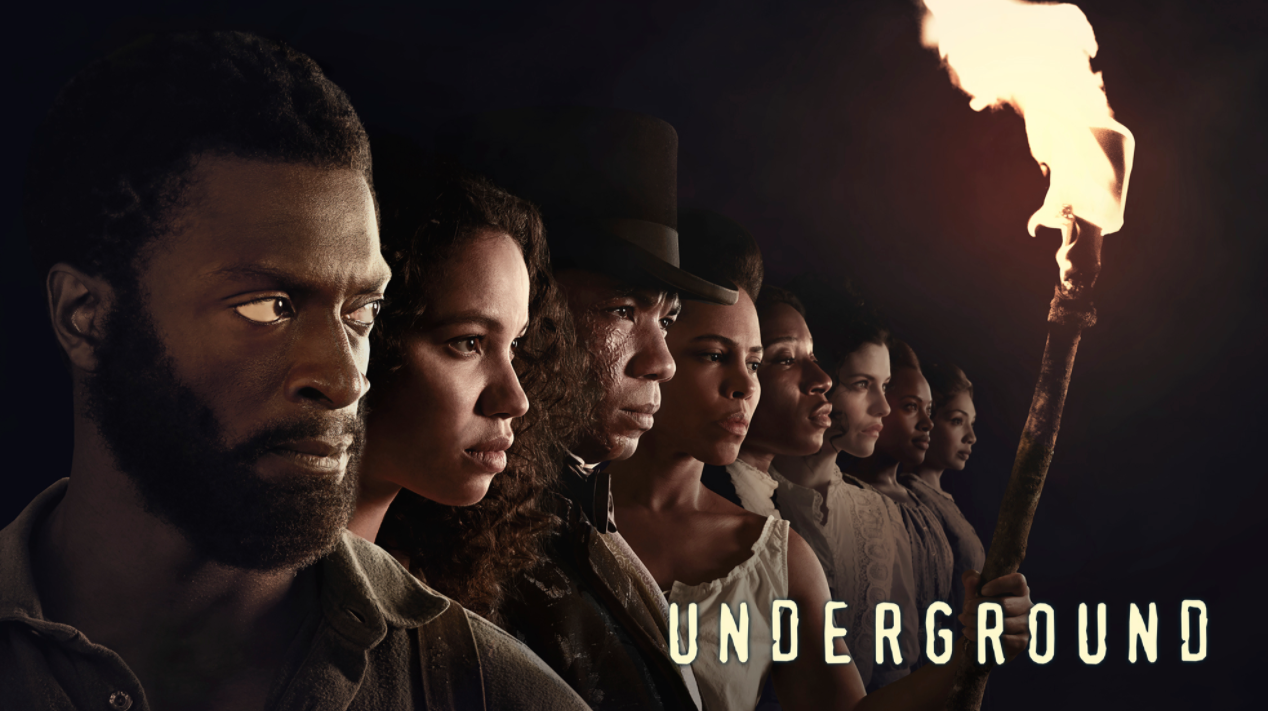 OWN: Oprah Winfrey Network announced today that it has acquired the critically acclaimed historical drama “Underground” to air beginning Tuesday, January 5 at 9 p.m. ET/PT.  The dramatic series from Sony Pictures Television will have a revitalized presentation on OWN, with newly filmed episodic introductions by cast members, never-before-seen behind the scenes footage and more.

In 1857, a restless slave named Noah organizes a small team of fellow slaves on the Macon plantation outside Atlanta, and puts together a plan to run for their lives — 600 dangerous miles North — to freedom. The odds of success are slim; the path to freedom’s terrain is unforgiving, and Tom, their politically ambitious owner will surely kill anyone attempting to run.  For those who make it off the plantation, the risks and uncertainties multiply.  They leave family behind to pay for their sins, as they face danger and death at every turn.   They’re aided along the way by an abolitionist couple in Ohio, new to running a station on the Underground, unprepared for the havoc it will wreak with their personal lives, while they evade a ruthless slave catcher hell-bent on bringing them back, dead or alive.

“Underground” stars Aldis Hodge (“City on a Hill,” “Brian Banks,” “Hidden Figures”) as Noah, a restless slave who organizes a small team of fellow slaves on the Macon plantation to plan an escape; Jurnee Smollett (“Lovecraft Country,” “Birds of Prey: And the Fantabulous Emancipation of One Harley Quinn,” “True Blood”) as Rosalee, a shy house slave with a powerful inner strength and courage; Emmy-nominated actor Christopher Meloni (“Law & Order: Special Victims Unit,” “Happy!”) as August Pullman, a secretive man who walks a tightrope between morality and survival; Alano Miller (“Cherish The Day,” “Jane The Virgin,” “Loving”) as Cato, a cunning, charismatic man despised and feared by his fellow slaves; and Jessica De Gouw (“Pennyworth,” “The Crown,” “The Last Tycoon”) as Elizabeth Hawkes, a socialite who shares the abolitionist ideals of her husband, John (Marc Blucas, “Knight and Day,” “Buffy the Vampire Slayer”), a lawyer whose principles clash with the legislation he’s sworn to uphold.

‘The internationally renowned cast includes Adina Porter (“American Horror Story,” “True Blood,” “The 100,”) as Pearly Mae, a strong-willed wife and mother; Mykelti Williamson (“Fences,” “Forest Gump”) as her husband Moses, a fiery preacher; Amirah Vann (“How to Get Away with Murder,” “Star Trek: Picard,” “Unsolved: The Murders of Tupac and the Notorious B.I.G”) as Ernestine, head house slave and fiercely devoted mother; Johnny Ray Gill (“Rectify”) as Sam, Rosalee’s half-brother and a talented carpenter; Chris Chalk (“When They See Us,” “Perry Mason,” “Homeland”) as William Still, an abolitionist ally; Reed Diamond (“13 Reasons Why”) as Tom Macon, a plantation owner and political candidate; and Jussie Smollett (“Empire”), who joins his sister Smollet in the cast as Josey, a wild-eyed runaway who doesn’t trust anyone. In season 2, Legend guest stars as iconic abolitionist, orator and author Frederick Douglass, Aisha Hinds (“9-1-1,” “Unsolved: The Murders of Tupac and the Notorious B.I.G,” “True Blood”) steps into a recurring guest star role as Harriet Tubman; and Sadie Stratton (“Westworld”) portrays notorious slave trader Patty Cannon.

The series was named Best TV Show by the African American Film Critics Association, received four NAACP Image Award nominations and was nominated as Outstanding New Program by the Television Critics Association.  It won three Cynopsis TV Awards and was honored by Broadcasting & Cable and Multichannel News for Diversity Discussion in Television and Video and was nominated for an ASC Award for its cinematography.

Television critics throughout the country widely praised the show.  The Washington Post’s Hank Stuever called it “a thunderous TV drama…ably weaving together the stories of slave and master; the hunted and the hunters,” while Alyssa Rosenberg (also of The Washington Post) said, “Underground” is“…an exciting template for how Hollywood could break out of tired lanes to tell new and reinvigorated stories about African-American history.”