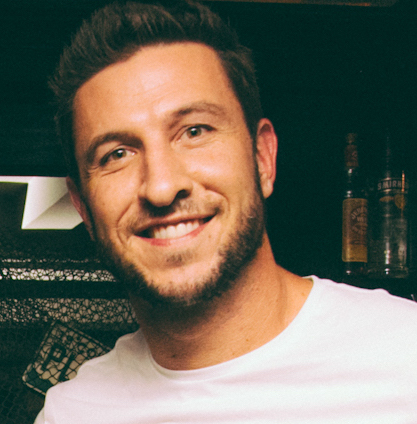 Pablo Schreiber has been settling chameleon-like into an eclectic array of roles for many years. This week his turn as a ruthless drug dealer in the Tribeca Film Festival offering, Thumper is being released on DVD and VOD. But BGN caught up with Pablo during New York Comic Con weekend to talk about another highly anticipated DVD release: American Gods Season 1. A party hosted by Starz, Fremantle Media and Lionsgate at Manhattan’s Stitch Bar served as the backdrop.

Check out my chat with Ricky Whittle who plays Shadow Moon.

Check out Jamie’s chat with Yetide Badaki who plays Bilquis.

C.R. Sparrow: What are your proudest moments from Season 1?

Pablo Schreiber: I would say my proudest moment was watching the finished product. Sitting in a movie theater in Austin, Texas during SXSW was the first time I saw it. Sitting in a packed house hearing people appreciate it and seeing how it was affecting them was one of my proudest moments. Then watching Episode 7 was a big one for me, to see my character’s arc come full circle and see Mad Sweeney get a little bit of redemption at the end of the season in a humanizing way was a proud moment.

C.R.: Mad Sweeney is a much smaller character in the book. Do you feel a sense of ownership of the character? Do you feel like you really embodied him and brought him to this new audience?

Pablo: Well, I feel a sense of co-ownership with Bryan Fuller and Michael Green. They created the template for me, giving me the words to say, and doing an amazing job writing it. It’s a great gift that he only appears in two scenes in the book. There’s a massive chunk of time between those two scenes where we now get to create a fresh and interesting story that doesn’t change anything from the book. It just fills in the space Neil didn’t write about. And I think it was a genius move to combine the characters of Mad Sweeney and Laura because they’re these behind-the-scenes characters you don’t really get to see too much in the book.

C.R. What would you like to see in season 2?

Pablo: Obviously, I think Sweeney and Laura are a really good match. There’s a lot of chemistry between Emily and I, so I want to have more interactions with her and try to play that out fully and see where it goes. I’d love to have some scenes with Mr. Nancy. I think that would be fun. And I want to see what’s going to happen with the Wednesday/Sweeney thing. Sweeny’s definitely stuck between two camps at this point. I want to see where he falls in that.

CR: Who would Pablo pick?

Pablo: Me? I’d pick Dead Wife, of course! She’s cute! Plus Wednesday is just not a good person. He’s conniving and manipulative.

CR: Well you could say that about all of them, except maybe Shadow. They’re all like that.

Pablo: But that’s what I love about the show and the character. On the surface, he and Laura are like the worst people on the show. They’re just grotesque and awful and take big chunks out of each other every chance they get. They’re foul-mouthed and disgusting, yet they both shine through with heart. You know they’re both suffering from mistakes that they’ve made and you feel bad for them.

CR: What made you take on the challenge of this new genre?

Pablo: Because I hadn’t done it before! I like to do things very different from the last thing that I did. And who better to get exposed to this genre than being on a Bryan Fuller show based on a Neil Gaiman book? These guys are legends. I also felt like it wasn’t like anything else on TV. It’s uniqueness and originality drew me to it. And I liked the things that it had to say about where we’re at in our country.