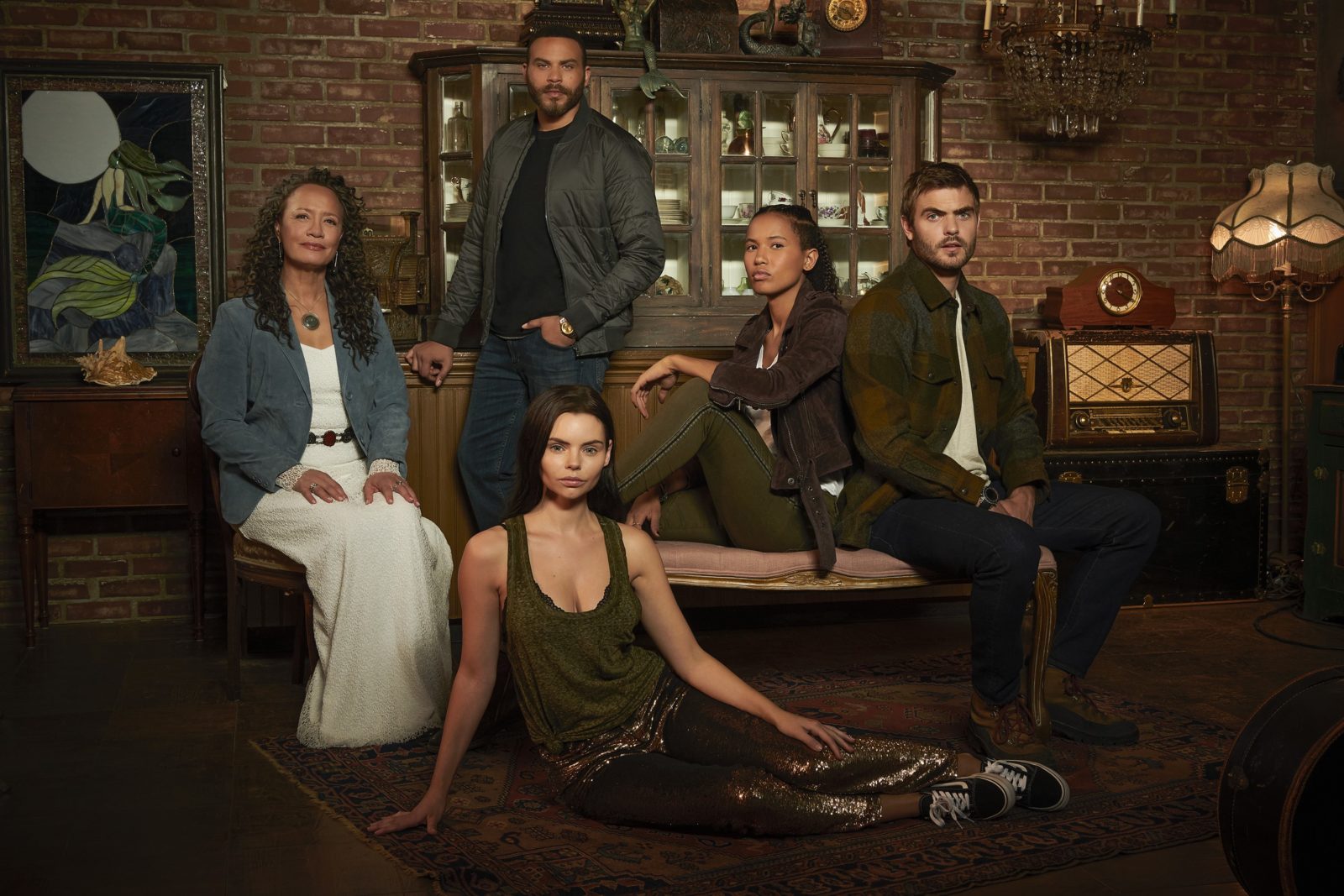 When we last saw the mermaid Ryn (Eline Powell) and her friends as well as foes, they had successfully managed to damage an oil rig that was hurting not just the mermaids deep underwater, but the entire Bristol Cove ecosystem to boot.

With the help of her girlfriend Maddie (Fola Evans-Akingbola) and boyfriend Ben (Alex Roe), Ryn and her mer-family were able to return to the deep without risk of being found or followed. But this was not without casualties. While saving his family, merman Sarge (Hugo Ateo) was killed, and in the fracas Ben and Maddie’s friend Xander (Ian Verdun) had an accident that burned his boat down far out in the ocean before the Coast Guard could help. The second part of Siren’s second season opens just moments after Part 1’s finale and quickly follows up with a time-jump to two weeks later.

Siren songs apparently don’t just affect men, because Maddie continues to grieve the loss of her mer-partner in big ways. Ben, on the other hand, seems adjusted and okay with Ryn’s absence, eventually revealing to Maddie it’s because he continues to listen to the recording of Ryn’s singing to get him through. “It’s just something to take the edge off,” he tells Maddie, heightening the obsession and addiction metaphor that’s been developed in Siren since its pilot episode. Only now, Maddie is addicted to Ryn’s song, too.

This song may not be as comforting as it seems on the surface. Military scientist Nicole (Natalee Linez) has been pulling together the research of her predecessor Aldon Decker (Ron Yuan) and uncovers that the siren song may indeed be causing brain damage akin to radiation poisoning. (After Chernobyl, those words have taken on a new and horrifying meaning.) Nicole also reveals to Maddie and Ben that Ryn allowed her team to do preliminary tests on her before she went back in the water to help Ben get out of jail. Now that the mermaid stem cells the scientists had are running out, Nicole is hoping Ryn will return.

In the meantime, Ben’s mother Elaine Pownall (Sarah-Jane Redmond) is in a crisis of her own as the paralysis from the boating accident she survived 10 years earlier begins spreading. Mer-human hybrids Helen (Rena Owen) and Rick (Brendan Fletcher) decide that it’s time to let Rick’s family know what they’ve discovered about their ancestry.

Siren has a lot of moving parts, both above and underwater. Underwater, Katrina (Aylya Marzolf) and Ryn’s niece Cami (Millan Tesfazgi) are searching for a new home for the mers as well as any survivors from the oil rig’s deathly sonic booms. Ryn misses her humans almost as much as they miss her, and she returns to the surface to see them again. Obsession and addiction go both ways in a siren’s life. Her song has inextricably linked them, for better or worse.

It turns out to be for worse, as Ryn, on finding out her stem cells could possibly save Ben’s mother’s life, offers to let the scientists mine her body without Ben and Maddie knowing. The procedure seems to work at first with no side effects for either Ryn or Mrs. Pownall. But the reprieve is short-lived as Ryn’s body has a delayed reaction to the procedure, causing her to lose absolute control of herself. First, the humans were a deadly threat to mermaids, now a mermaid has become an extreme threat to humans — a full circle I wasn’t expecting at all.

All the while, Siren’s second season continues the excellent world building they’ve done so far by expanding on the community of mer-human hybrids that are much bigger than anything we’d suspected before. After visiting Rick’s sister Beth (Caroline Cave), Helen and Rick discover she has known all along about their family’s mer-cestry and there is a sizeable tribe who maintain many of the cultural practices that have been passed down over the centuries. Helen and Rick, perpetual outsiders, have a brief moment of kinship with the group that passes quickly. Helen’s mom never told her about the tribe, having left them before Helen’s birth. An elderly family member hints at a terrible event that drove them away, which Beth promptly dismisses as the ramblings of an old man. Helen and Rick smell something fishy, metaphorically speaking, and they know something is amiss.

For anyone who’s done an ancestry test that turned up with a percentage of their DNA as unknown or unidentified, it’s rather delicious to imagine that those strands are from a mythical creature nobody knows still exists. This is how Helen and Rick found each other to begin with. That there is a thriving mer-human hybrid community on land, even as questionable as their past might be, adds a fantastic new level to the creatures of Siren. I’m so looking forward to where this will all lead.

As Siren continues its excellent embedded social commentary of environmentalism, addiction, obsession, and the importance of consent through the metaphor of mermaid-human interactions, easily my new favorite addition is the inclusion of an LGBTQ storyline to make everyone’s toes curl. The romantic and sexual relationship between Maddie, Ryn, and Ben is arguably one of the boldest statements a Disney-produced show has ever made. In fact, Siren could just have easily been only about this and I’d be back until eternity to see where the lovebirds are at this week. Pansexual mermaids in relationships with humans? I mean, who could ask for anything more, especially during Pride month?

Along with the excellent fresh world building above water, from the first two episodes of the second half of the season, we also get some juicy hints of the mermaids’ worlds and traditions from underwater. I can’t choose what I’m most excited about. If Siren isn’t already on your radar, remedy this and stat. The social commentary is on point, the inclusion and representation on all the levels (race, gender, sexuality) are three-dimensional, and the mermaids are spectacular, both in and out of the water. Siren is mer-mazing, and I’m overjoyed to report it’s been renewed for a third season. Bring it, fishes.