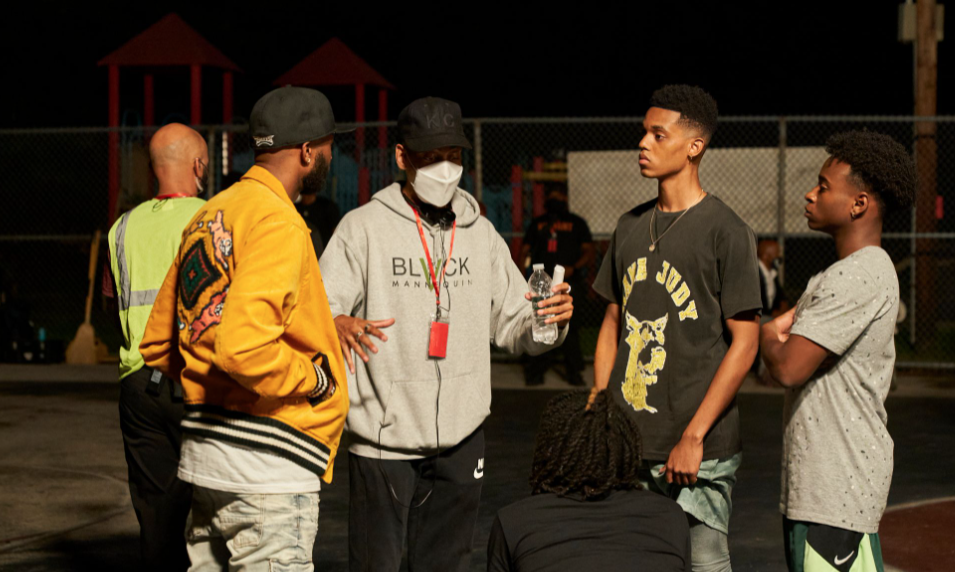 If behind every great man is an even better woman, then behind every great show is a cast and crew that work tirelessly to make something out of nothing. Bel-Air is full of hard workers who endeavor to bring Morgan Cooper’s dream to the screen. From creator and showrunner Cooper, to executive producers Rasheed Newson and TJ Brady and heads for hair and makeup Araxi Lindsey and Denise Pugh-Ruiz, every person is important in making the show what it is.

I had a chance to visit the set of Bel-Air and speak with some of the behind-the-scenes crew who bring the drama to life. I gained a new appreciation for what it takes to get a show to air and why only high quality is expected.

On what made him choose to create the dramatic reimagining:

“I come from the camera — I was a cinematographer for many years. When ideas hit me, the vision comes to me all at once. I see how the faces look and how the colors look, and then that meshes with the worlds and the colors I see. I see it all in color. So I was driving down the highway, and it all hit me. I’ve always believed in manifesting so I made a call to my producer, put up the money to make the short, and here we are!”

On staying true to his vision:

“I think the biggest thing is that you can’t be possessive in television. You sell a show and it’s no longer yours, so everyday it’s just waking up in gratitude of the situation. Everybody’s got an opinion and that’s television, that’s the nature of it, but it’s exciting. There are a lot of different perspectives that go into [the show]. It’s not just one person’s thing. So it’s just taking one day at a time. I’m thankful to be working with very thoughtful artists who have a ton of experience so every day is a great learning experience.”

Rasheed Newson on how they brought the show into the current century:

“Early in the room there was a question of, ‘Do you want to be aspirational?’ Are we showing the world as we wish it was, or as it is? We have opted to show the world as it is. One of the reckonings of the show is that this show came out 30 years ago. I watched every episode as a kid and was like, ‘I can’t wait till I’m that old!’ and now I’m Uncle Phil! The original show was at a different time in America, so now 2021 things are a lot different. One of the things we wanted to shake off was the idea that if you’re rich and Black that you trade it in — your allegiance to liberalism — along the way. When you walk into the mansion, it’s filled with a lot of Black art, African American art, everybody from Gio Swaby to Ferrari Sheppard. When you walk into this house, they’re not just rich, they’re Black and rich.”

TJ Brady on forming a family:

“I’m really, really proud of the parental storyline. I think given our age and experience, we both have families and we have kids. We both balanced marriage with career. The Phil story and the Viv storyline intertwine; they need each other. But I’m just very proud of the story arc over 10 episodes that we’re delivering where there might be a shift in the relationship and power dynamic we’ve established in the pilot.”

Brady on responding to the pressure of being being asked for the impossible:

“There’s something I say to my wife all the time when the pressure is piling up. I say, ‘These are the problems I pray for.’ If I have to have problems, I want showrunner problems.

On the importance of Black makeup artists:

“It was something very important to our showrunners that we had department heads who were people of color. We’re coming from [a time when] we’ve had actors that would come into the trailer and not see one of us, and it was very scary. For the most part [the make-up artists] would say, ‘Oh, you okay, you look good,’ and be shocked when it comes to our hair. So when our actors come to our trailer, they all say the same things: ‘We just feel so comfortable.’ They just love that they come in and we take good care of them.

On the importance of insisting on representation:

“In the history of being in motion pictures, you’ll have actors who will come into the salon and get their hair done before they actually go to work. And we’re not getting hours, we’re not on salary, they’re actually paying out of pocket. They’ll bring the receipts to the production, but everyone else is on salary and getting credit as if they did the work. So now that we’re at this space where people in the trailers do our hairstyles. Having us in the trailer helps to tell our stories and let it be a little more authentic and comfortable for the viewer.”