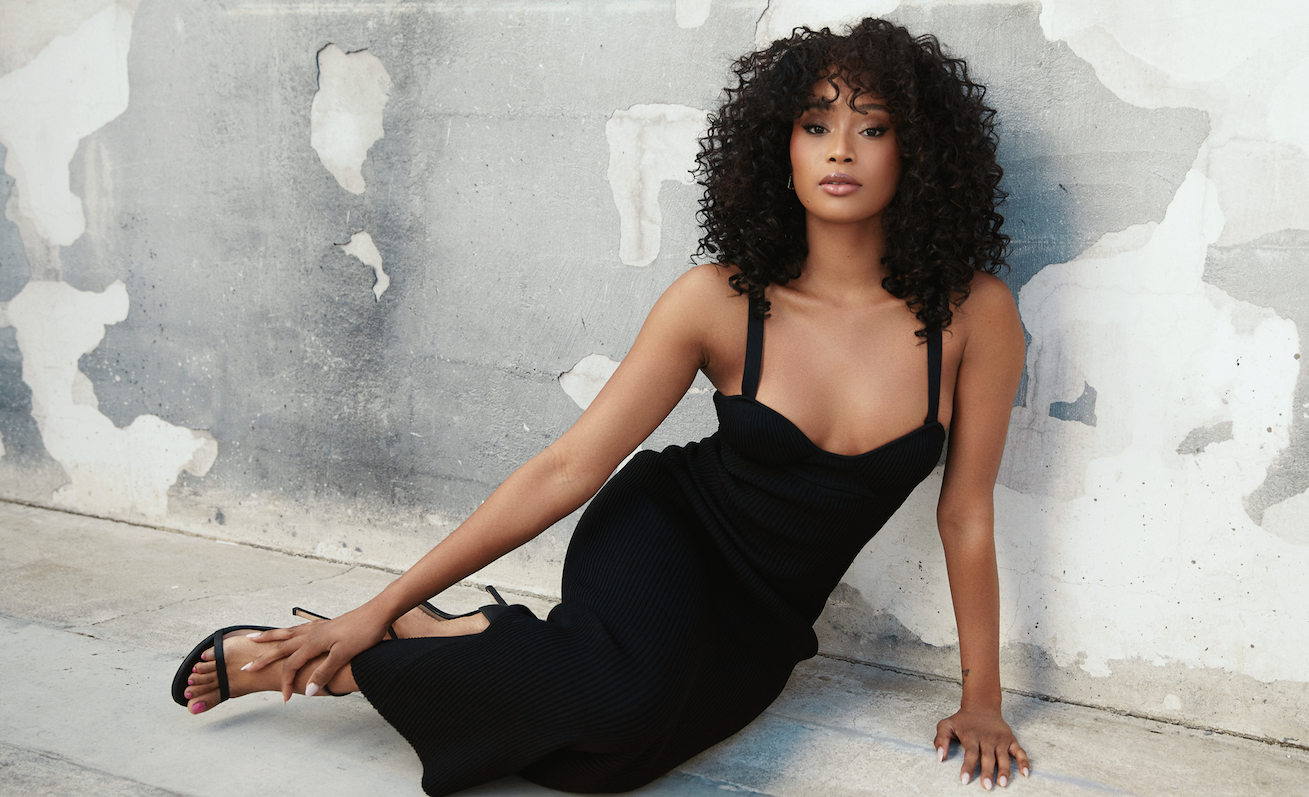 “I know I’m supposed to be the sober-minded friend, but I wanted to party too!” Pepi Sonuga laughs over Zoom with BGN as she discusses her role of Melanie in Hulu’s Pam & Tommy. Melanie is best friend to Pamela Anderson (Lily James), and she politely tries to dissuade Pamela from giving into Tommy Lee’s advances. She declares 1995 to be the “year of the good guy.”

Melanie may have been the stable friend but Sonuga had a different story. She says, “The majority of the scenes were partying and everybody’s having so much fun and I keep getting the direction, ‘Okay, you’re the stable one!’ [Melanie] got to party a bit but overall I’m the one with the watchful eye who always has Pam’s back.”

Sonuga has been acting since 2009, around the time she won the Miss Los Angeles pageant. “That was kind of my segue into acting professionally. I had been trying to audition and I had no idea what I was doing, so Miss LA put me in some sort of direction,” she says. Sonuga moved to the U.S. from Nigeria when she was 10. She attended Culver City high school and soon got into modeling. While she was certainly booking work, her catalog consisted of mostly streetwear brands. She knew she wanted to do something more but wasn’t sure what until the Miss Los Angeles pageant carved a path for her.

After auditioning and getting cast in the requisite newcomer roles on shows like The Fosters, Sonuga found some longevity in series like Ash vs. Evil Dead and Famous in Love. Then in 2020 things changed for her. Pre-pandemic Sonuga was involved in a production called Harlem’s Kitchen that was created and written by Zahir McGhee. Due to shutdowns, the series never even got a chance to film.

“Our pilot never got to go to series,” Sonuga says. She was disheartened by the setback, but fate had another plan. “[Zahir] started writing Queens and he was like, ‘You know, there’s this role — you have to play this character!’ I read the script and was a bit confused, and he said I had to trust him on it and I was gonna kill it.” Queens, currently airing on ABC, is the story of a group of musicians who come back on the scene after being gone for 20 years. They are asked to appear on a comeback tour by Sonuga’s character, Lil Muffin. The role of Lil Muffin aka Lauren Rice has made Pepi Sonuga a recognized figure. The brazen yet vulnerable hip hop artist has helped Sonuga gain a following of loyal fans on her own.

To gain that attention is one thing, but to gain it alongside legends like Eve, Naturi Naughton and Brandy? Sonuga was truly living the dream. She tells BGN, “I have so much respect for them and I wanted to have them respect me too. I think that was the intimidating part for me.” Sonuga remembers feeling awkward because she wasn’t a musician. When a scene called for acting, she could work hard and do the job that’s required of her. But to ask someone who wasn’t a musician to portray one in a group of some of the best musicians? It was a pretty daunting ask.

Sonuga admits, “Lil Muffin is supposed to be the hot new rapper on the set, and I felt so intimidated, but that quickly faded when [the women in the cast] were so lovely and humble and supportive. It was a dream come true, seriously.” Sonuga’s portrayal gives Lil Muffin an agency that shows you the tip of her iceberg. Most of her lies underneath the facade she’s built to survive. Her character is elevated under Sonuga’s careful performance, which shows the lengths female artists go to remain relevant and in the conversation. Sonuga has a comfortable confidence on the screen and this extends to her role as Melanie.

How did she become aware of the role for Pam & Tommy? “Really,” she says, “it was just auditioning. I just got the guts to go and do it. I definitely wanted to be a part of it.” Sonuga was born in 1994 so she was a baby when the scandal behind the Pamela Anderson and Tommy Lee sex tape occurred. Her character Melanie appears near the beginning as Pamela’s confidante and the top member of her entourage. She’s there when Pam and Tommy first meet and later when they wed on a beach in Cancun. Lee effectively crashes Pamela’s work trip, and Pamela, despite Melanie’s many objections, can’t help but be charmed.

“I had to do some research, and I was quite shocked,” Sonuga says about her deep dive into the script. “Like, wait, did this really happen? And I’m like wow, this really happened. It’s quite accurate. I love the way they depicted [Pamela] and the way they retold her story. I had to learn it in retrospect. It was sad the way the media addressed [the scandal] back then, so I feel like we’re getting to retell it and reclaim that story for Pam.” Pam and Tommy exposes the differences between the way we would treat a similar situation now vs. then. At the time Pamela’s life was blown up and put on display in a way that was unheard of up to that point.

Sonuga’s role is smaller in the mini-series, but it’s still comforting to see someone in Pam’s corner while she takes on the new pressures in her life. Sonuga is currently enjoying Atlanta while on break from Queens, but will be back to work soon bringing life to exciting characters.