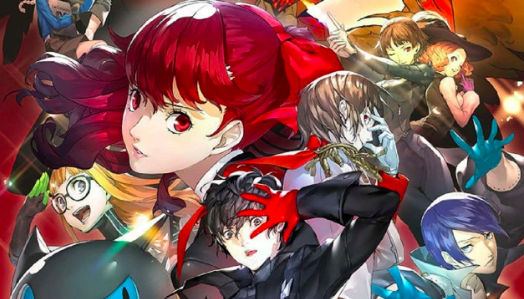 Now, I know everyone’s go-to game during this unnerving time has been Animal Crossing, but the new Persona 5 Royal game by Atlus for the Playstation 4, is a ginormous reason for gamers to put down their cute little animated villager shovels and get ready to serve some juicy vigilante justice with the Phantom Thieves of Hearts.

Royal is the expansion of the original Persona 5 game that was released worldwide in April 2017. This continuation was released in March 2020, following rave reviews for the original version. Every leading video game critic site and reviewer has given the game a zealous thumbs up, and I must concur. It’s pretty awesome. Do you wanna know just how awesome? Well, let’s get down to the nitty gritty.

Most gamers recognize Persona as a staple and household name in the community, so I won’t spend too much time on storyline. Basically, if you like anime role-playing games, this will be your cup of bubble tea (with boba and jelly, because that’s just how delicious it is). I will warn those who have played the base P5 that P5R is pretty similar when it comes to storyline. However, when it comes to the wealth of new content, it feels like being greeted by a brand new game.

Persona 5 Royal is very time-consuming, so if you’re bored AF during self-isolation, get ready for a very long but cool ride. This extension adds over 30 hours to the original game by including new content as well as many changes throughout the game. The plot stays almost the same as the original, but there are some new characters that fit very organically into the plot and add new perspectives on P5’s themes of rebellion and reform.

Like many Persona games, P5R has a unique and fun animation style with its own swag and personality. The colors are vivid and engaging. The manga style is fun and provides an almost comic book feeling when reading the character dialogue. With that said, the game does take on some adult themes that are best for mature audiences. The game is rated M for blood, drug reference, partial nudity, sexual themes, strong language, and violence. The game addresses some heavy issues, such as child abuse. So, just keep that in mind before diving in.

Get ready, because P5R is a very systems-heavy game. I know that some people dread the challenge of figuring out how to master game mechanics, but I tend to enjoy the complexity. There was a certain flexibility I felt without being locked into a specific way of playing or giving unnecessary buffers to hand-hold me through the game. Don’t get me wrong, I had to play around with a few things because there are a lot of options. Luckily, I had my gamer master brother Vincint to give me tips along the way. P5R provides more time in order to streamline the systems, too. For instance, there’s an NPC that boosts experience points and money. Also, players are able to build stats when it’s nighttime in the P5R — P5 didn’t allow players to utilize gameplay during a lot of nights in the game.

P5R improves the perks you get from maxing out some confidants this time around, which adds far more useful abilities and complements the ones your characters already have. P5 and P5R have a system called “confidants” that is a reconfiguring of the social link system from previous games enabling users to hang out with party members. You can build your relationship with them and even get a lil’ romance going (it’s kind of cute), which in turn gets you combat bonuses. Talk about redefining friends with benefits.

I particularly enjoyed the new game achievement system called “Thieves Den” that covers a wide variety of in-game activities. Completing them unlocks in-game currency used to buy movie figures and other things that the characters comment on (which is pretty funny actually). It doesn’t affect the actual storyline, but it’s a nice extra add-on to get more time out of the game if the initial hundred billion plus hours aren’t enough for you.

Honestly, as long as I kept the snacks flowing and got up for some power cardio every few moons, the time flew by. P5 was a darn near perfect gaming experience, and P5R is an even better version. It doesn’t quite hit that perfect mark, but there are truly few games that I can recall being as close.

It’s not just the gameplay itself that is so solid, but the music is also pretty fantastic. The Persona franchise as a whole has great scores, P5R included. While P5R doesn’t have my favorite Persona music (which would be Persona’s portable 3’s), I can say with confidence that the game soundtrack is worth a listen even if you don’t check the game out.

Grab your snacks and your comfy clothes and get ready to reach maximum potato mode as you embark on one epic journey.