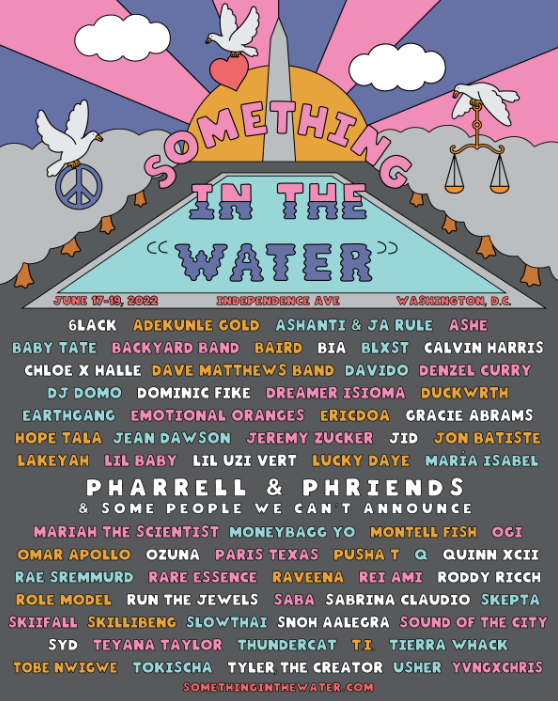 Today Pharrell announced on his Instagram and via press release the date and lineup of the Something In The Water music festival. The festival will take place in Washington, DC on Juneteenth weekend, June 17th – 19th. Building on the success of 2019’s inaugural event, Something In The Water returns in 2022 with expanded programming across three stages, situated in the heart of our nation’s capital, directly on Independence Avenue and its adjacent streets.

Three-day passes will go on sale to the general public beginning Saturday, April 30th at 10am local time at SOMETHINGINTHEWATER.COM.

Later today, past purchasers of Something In The Water passes will receive an exclusive “Loyalty Presale” code for the 2022 festival. The “Loyalty Presale” will take place on Wednesday, April 27 from 10am ET until Thursday, April 28 at 10pm ET at SOMETHINGINTHEWATER.COM.
* Limited tiered pricing. Only available while supplies last.

In addition, Virginia residents will have special access to a “Virginia Locals Only” presale taking place on Friday, April 29 from 10:00am ET through 5:00pm ET. Residents can purchase festival passes in-person at the Veterans United Home Loans Amphitheater at Virginia Beach box office, (restricted to VA zip codes). Fees are waived for the in-person purchase.

2020’s Something In The Water festival was postponed due to the COVID pandemic. And this past year, the controversial police coverup of the homicide of Donovon Lynch, the cousin of Pharrell Williams, led the music festival founder to leave Virginia Beach, Virginia and move to Washington D.C.

Many local residents of Virginia Beach, especially Black residents and people of color have supported Williams’ decision to move the festival and empathize with his anger over the police’s senseless regard and lack of transparency over the fatal shooting of Mr. Lynch.

The Something In The Water festival will start June 17-19 2022 on Independence Ave in Washington D.C. For more information go to SOMETHINGINTHEWATER.COM.