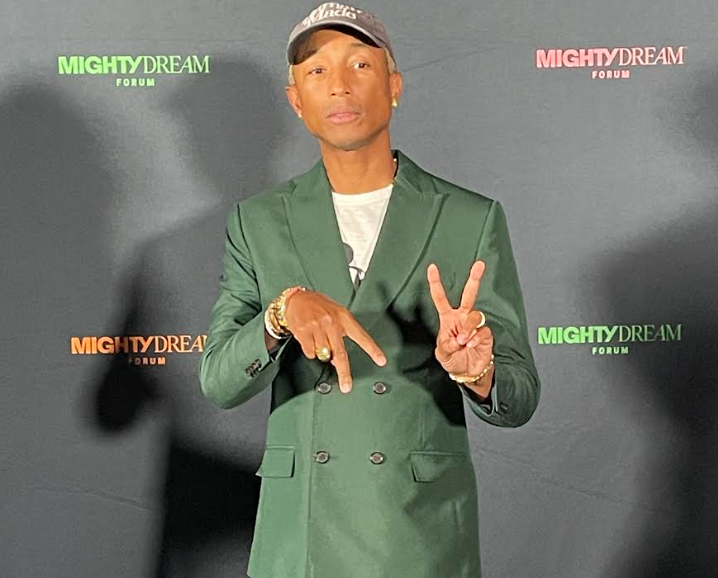 Pharrell Williams took some time to speak with the press during day 1 of the Mighty Dream Forum that launched today in Norfolk, Virginia.  The title of the event, inspired by a Langston Hughes poem, brought together a collective of entrepreneurs, innovators and creatives to network and learn the ins and outs of business.

Pharrell Williams, the humble multihyphenate that he is, wanted to make it very clear that this event is not about him, it is about the 757. Pharrell also believes that 757 residents should also be involved in their community.

“If you have 757 blood in your body this is what you should be doing. You should be putting on forums. You should be invested and doing anything that you can to raise awareness for this area,” he says.

The event is a multi-day forum in Norfolk, Virginia where matters of business, thought leadership, idea exchange, networking, and progressive conversation intersect with people of color.

Pharrell wants to pass that opportunity of privilege for those that need support. He believes that oftentimes, people hoard success for themselves, however he’s clear that is not the message he believes in. Set against a backdrop of community engagement and jaw-dropping entertainment he wants Mighty Dream Forum to be a bridge for the 757.

He wants to encourage other businesses and entrepreneurs to create forums just like this one. Pharrell adds, “This shouldn’t be the only forum for diversity, equity and inclusion. It’s time we removed the gatekeepers”

According to Pharrell there are $56 trillion dollars of representation on stage.  This includes corporate and NGO leaders who are prioritizing DE&I in their organizations that will share their insights, set goals, make pledges, inform and inspire other leaders to be the best they can be. The forum is holistically designed to broker honest, direct dialogue on how global business leaders can create a more equitable society.

Black Ambition is a passion project he co-leads along with CEO Felecia Hatcher where he’s injecting funds to Black and brown entrepreneurs. Winners of the Black Ambition prize are due to be announced at the forum.  Pharrell says he’s given away money to 34 companies so far. He says, “we’ve given away millions of dollars. I know today is going to be another [$2.5 million] that we give away and against a 501c3, none of this is in our pocket. This is just for our future.”

Pharrell wants attendees of this event to be effectively trading information and contacts as well as get inspired to know that they too, can do it.

The Mighty Dream Forum runs Wednesday and Thursday this week from 8:45am – 8:30pm in the Granby section of Norfolk Virginia. Tickets are limited. For more information on where to purchase, go to their website here.