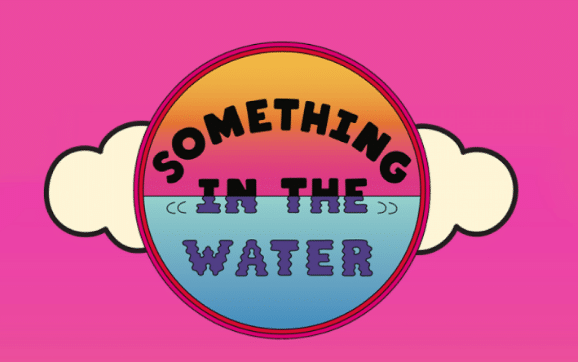 This past weekend from April 26th-28th, music mogul Pharrell Williams launched a music festival in his hometown of Virginia Beach aptly titled Something In The Water.

The city of Virginia Beach has a long history of music artists and entertainers born and bred here. However, the city doesn’t get much love when it comes to opportunities for entertainment creatives to grow and develop careers in the area. In most cases, entertainers venture to New York City or Los Angeles to pursue their dreams and Virginia becomes a nostalgic place and distant memory.

This past weekend, a resurgence of pride occurred for locals who still live here and have the faith that Virginia Beach can be a hub for entertainment, music, tech and more when multi-hyphenate Pharrell Williams brought his inaugural festival, Something In The Water (SITW). 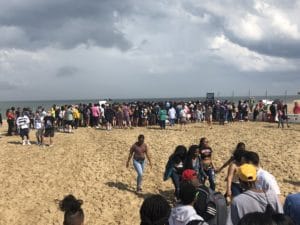 Day one of the festival was a washout when torrential winds and rain descended upon Virginia Beach and all of the musical acts were canceled.  If you were interested in more than just music, attendees had the opportunity to experience panels on music, entrepreneurship, and tech. And there was also a movie screening of the impending Netflix film The Burial of Kojo by Ava DuVernay’s distribution company, ARRAY.

Pharrell Williams and moderator Scott Vener led a discussion on the revolving roster of music cultural heavyweights on OTHERtone. There were also panels on Breaking Into Tech, The Art of Music Publishing, a pitch competition for students to create a start-up, a Community Shark Tank and a Guided Meditation with John Van Auken. The programming ideas for the event offered innovation, creativity, networking opportunities, and mindfulness practices. Each of these panels took place at the Virginia Beach Convention Center, which was just a short trolley ride away from the Oceanfront where the bulk of activities during SITW took place.

The sun shined brightly and no rain was in sight on day 2, which began with events in several areas of the festival. If you elected to check out the panels at the convention center, a discussion called gOD-Talk: A Black Millennials and Faith Conversation began early at 11 am, and church fans with the panel logo were distributed to attendees.

The panel topic was on how Black Millennials are redefining sexuality and the idea of presenting a new perspective on the conservative Black church. Pastor Tim Bowman and Candice Benbow had an interesting debate on how we define borders and guidelines on love. Bowman appeared to have a more conservative perspective on sexuality and is governed by what the biblical text says about it, and Benbow refers to being more “spiritually fluid” and says for the body of Christ to work we cannot all be the same. Let us all live in our purpose.

Another compelling panel was the screening of The Redemption Project with Van Jones. The panel was moderated by Van Jones and featured guests Geoffrey Canada and Deepak Chopra. Shortly after the screening of one of the episodes, the men talked about the criminal justice system, the act of forgiveness and the lost art of conversation between opposing groups in this country. 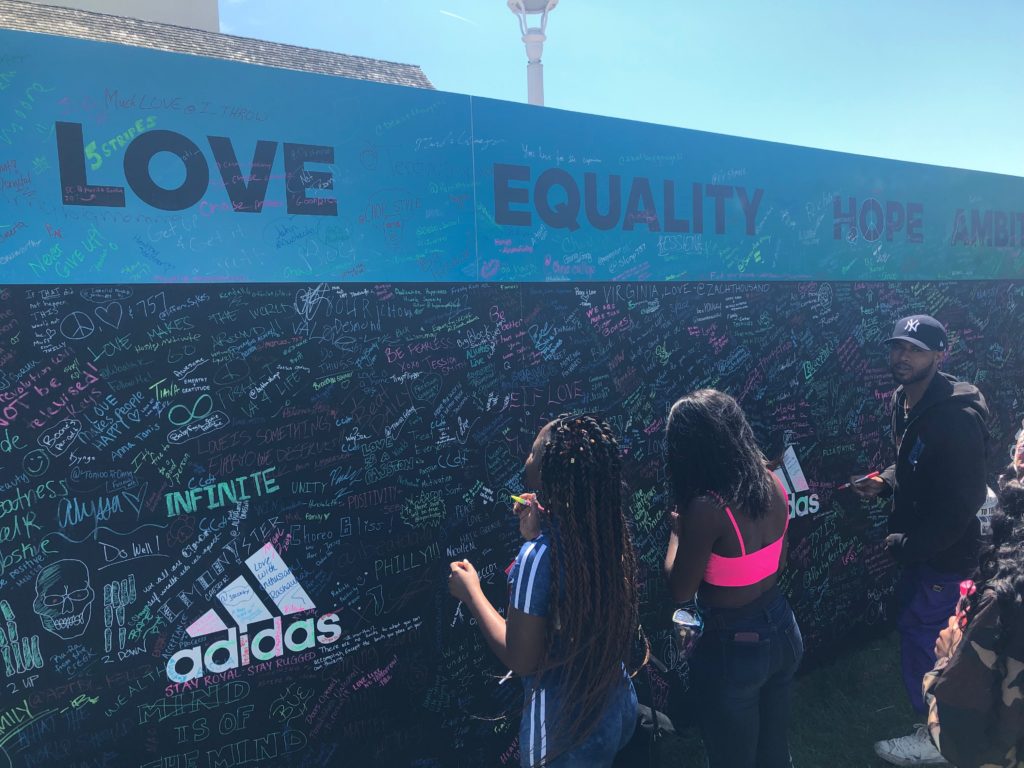 There were more panels happening throughout the day at the convention center, but if you wanted to get some Vitamin D and see what was outside, the Adidas Park located on 24th and Atlantic, was a great opportunity to be entertained outdoors. The park offered free Adidas sliders and customized tote bags for those willing to wait in line for the swag. Activities included a dance competition and a game of cornhole. 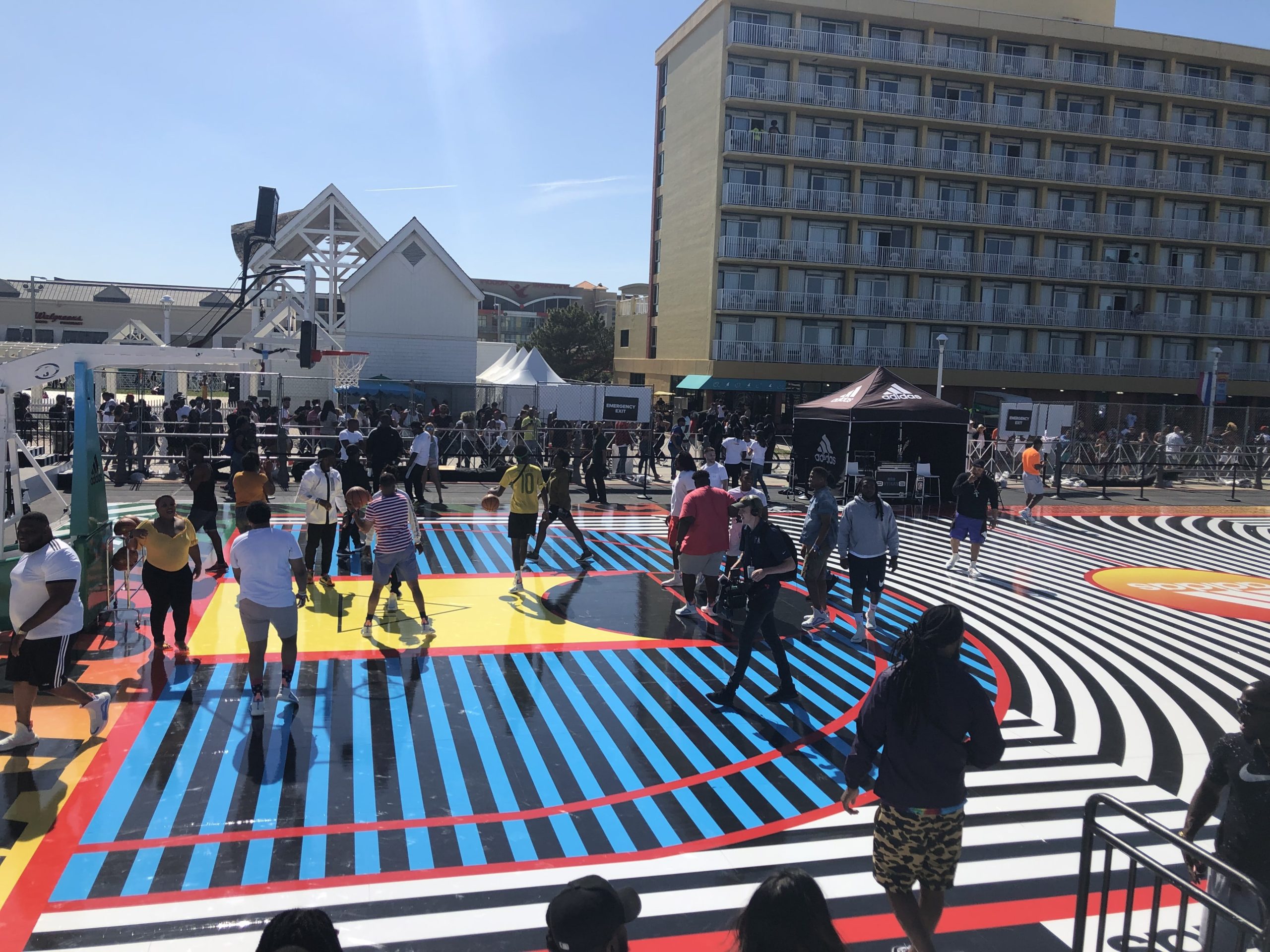 Less than a block away was the Adidas HU Court, which was a customized basketball court built for attendees to play ball, participate in challenges and more. SITW offered some pretty cool pop-ups and activations from companies such as Timbaland and Sony.

The Timbaland Shop was a great place to recharge and relax. And from the photos below, it’s pretty easy to tell that this was a super hip hangout spot for the locals. 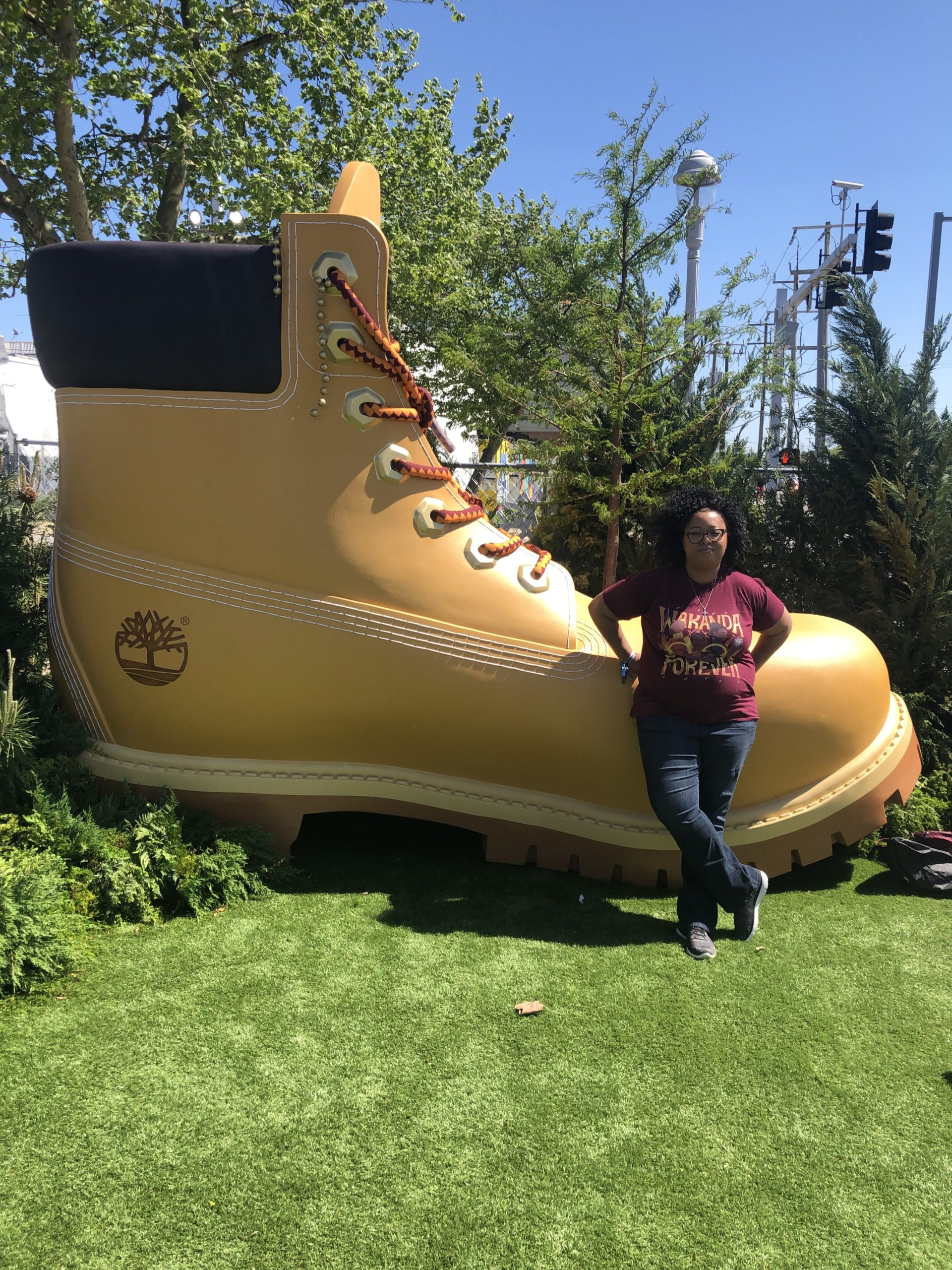 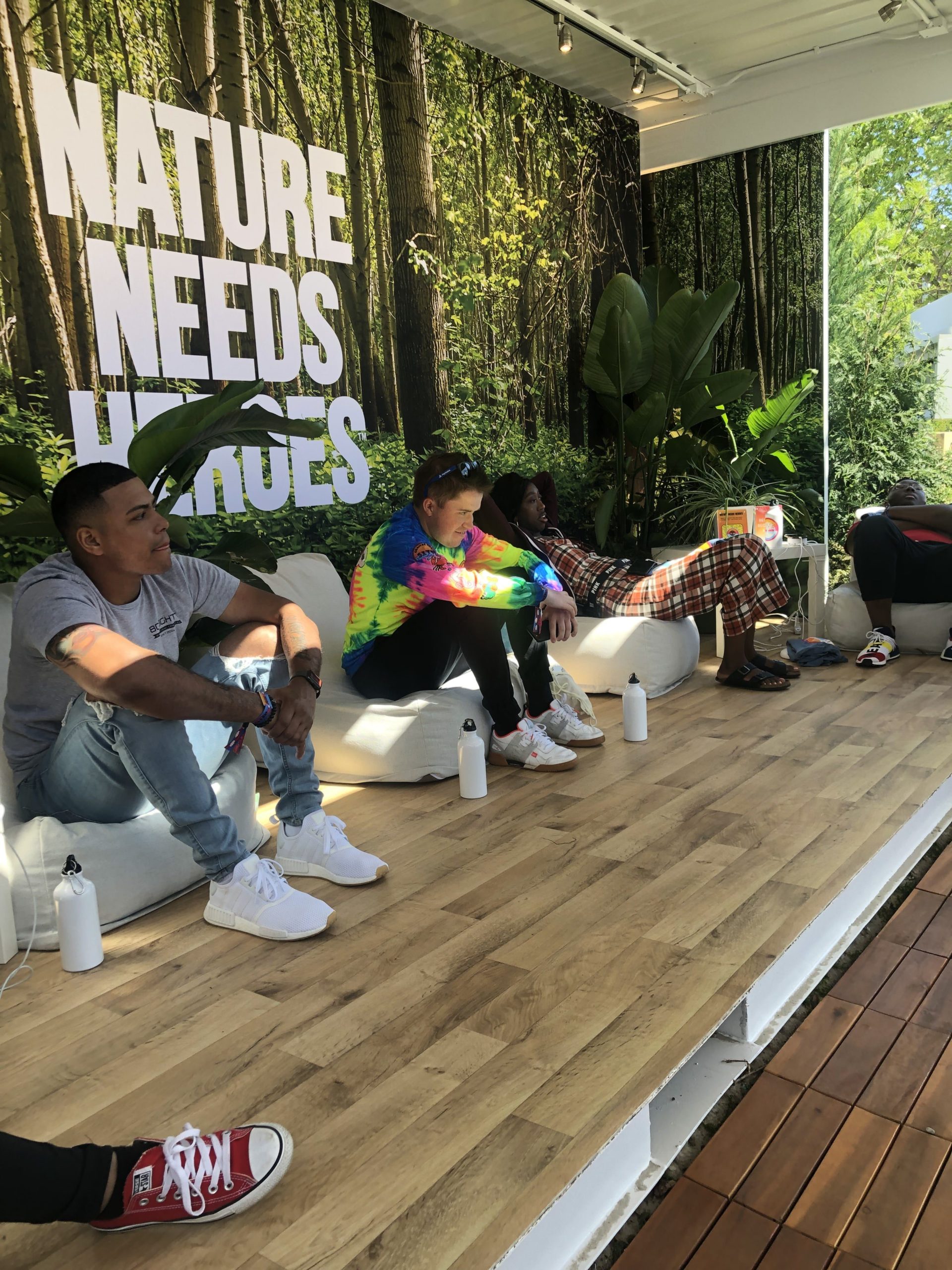 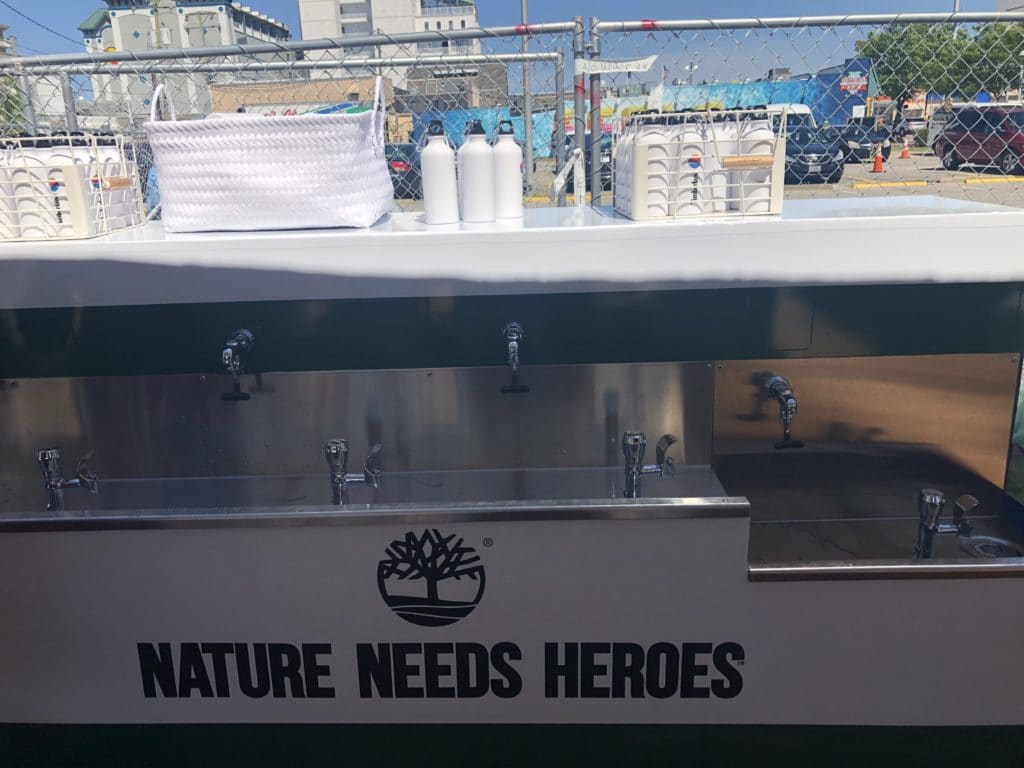 The pop-up offered free T-shirts, free water bottles, a water dispenser, and some iced coffee. Attendees simply scan the Q-code and sign up to get the free perks courtesy of Timbaland. This was a great opportunity to take a break and just socialize with friends. 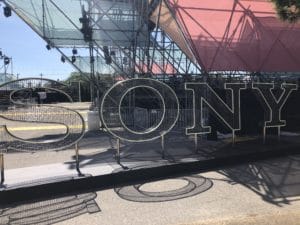 The Sony park also came with perks! The Sony space, which was free and open to the public, had a huge stage for musical acts to perform, this included Lil TJay, Ade and the Les Twins. The Les Twins appear in Men In Back: International and the movie branding, as well as a vehicle featured in the film, was on display. There was also a Sony PlayStation gaming area for the gaming nerds out there and a cool 360 reality audio music experience in a dome-shaped building that offered a meditation sound bath! You can also check out the new Sony Xperia XZ3 and Xperia 10 Plus smartphones along with a photo booth!

Another unique and remarkable opportunity was a spot called Sober Beach. Sober Beach provides support and information for those who seek the comfort of fellow clean and sober attendees of the festival. Those who are in recovery deserve an opportunity to have fun and not feel triggered by a venue with alcohol.

If you’re into Trap Karaoke, attendees who registered online had the opportunity to participate Saturday evening at the Virginia Beach Convention Center.

And finally there is what many fans came for, and that was the Main Stage area between 5th and 9th streets where Pharrell brought in some of the biggest and best entertainers in music. Sadly we missed performances from Dave Matthews Band, Janelle Monae, and more on Friday, but SITW made up for it on Saturday with performances by SZA, Travis Scott, Missy Elliott, Diddy, Busta Rhymes, Timbaland Usher, Snoop Dogg and a surprise appearance by Jay-Z. 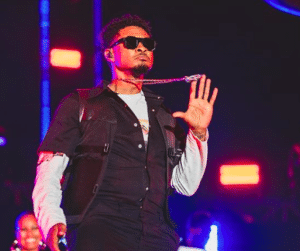 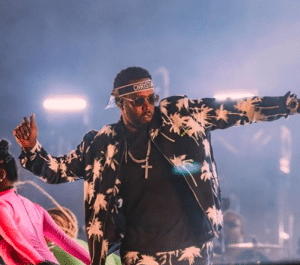 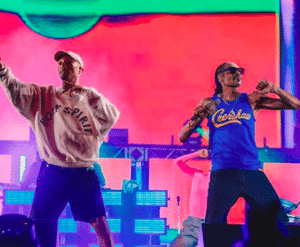 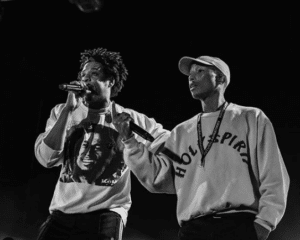 The crowds were intense and the sold-out festival (35,000 tickets sold) brought in not only those who purchased tickets, but locals participating in open events to the public. There were so many ticket-holders on the main stage that the beach was completely covered with people as opposed to sand.

On Sunday, another event that was free and open to the public was the Pop-Up Church Service that started at 12 noon. Praise and worship as well as hearing the Word of God was available to SITW patrons on yet another beautiful and sunny day. Performances by gospel greats and worship leaders Israel Houghton, Mary Mary, John P Kee, and Kirk Franklin performed. 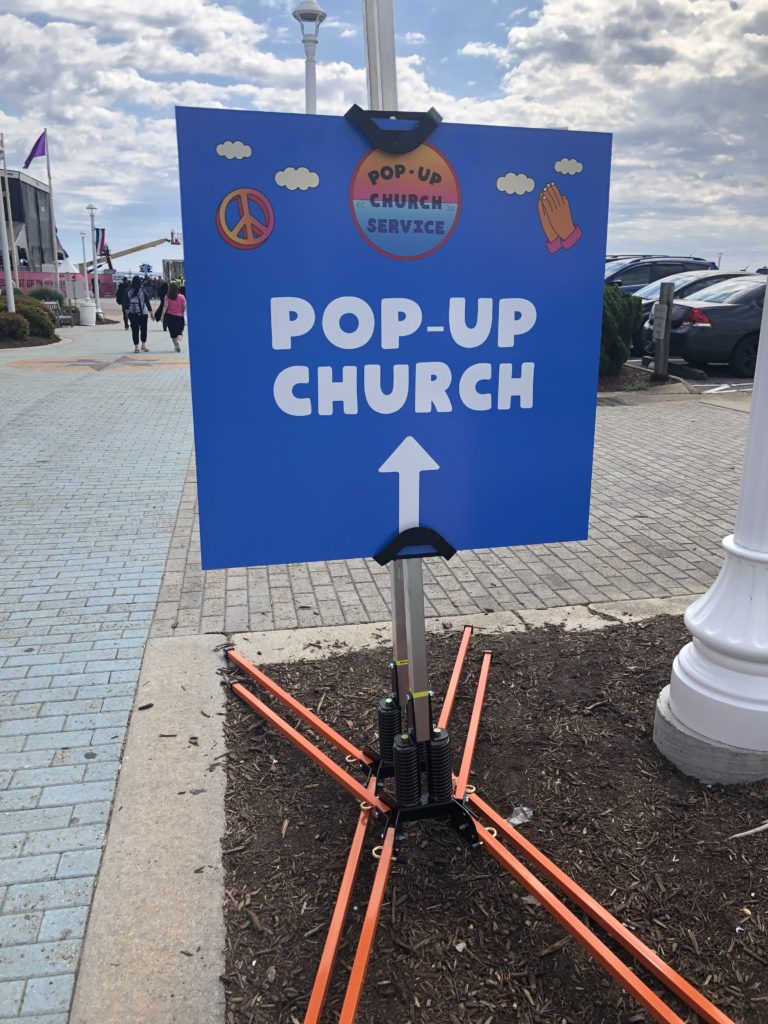 The Pop-Up Church also provided limited seating, free fans and ice cold water to cool down in the hot sun.

On the main stage, Sunday closed out with Pusha T, Teddy Riley, and Chris Brown among several others. Chris Brown brought in surprise guest Trey Songz, another VA native to SITW.

According to the Virginian-Pilot, Pharrell has confirmed he has plans for SITW 2020. Pharrell has remained humble throughout this entire event and dedicates the success of the festival on the community.

“All these things are happening and it’s not me, it’s the Virginians. This is what you guys did. I’m just really happy to be like a little comma in a small sentence, you know in a big huge book called Virginia.”

Congrats to Pharrell Williams and the festival organizers of SITW for their hard work and dedication to making this event happen.