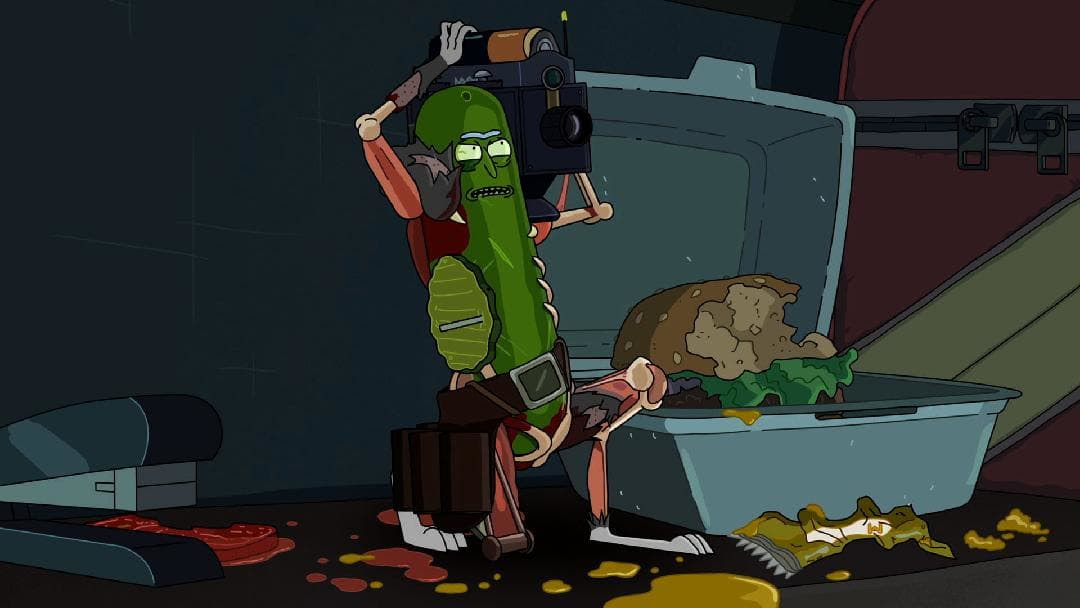 I’ve gotta say, if you haven’t been watching Rick and Morty this season you better start changing that, because it has fast evolved to one of the best-written shows on TV, if not THE best. I was a little worried after the second episode of the season though; “Rickmancing the Stone” was almost…bland, especially considering what a knock out the season opener was. (Anyone else craving Schezwan sauce? Just me? Alright.) But episode three “Pickle Rick” has got the show back to being amazing.

The episode starts off with Morty in the bathroom cleaning himself off and suddenly hearing the disembodied voice of Rick calling his name. He follows the sound of the voice to the garage and realizes it’s coming from a pickle—Rick has turned himself into a pickle, for “science reasons.” Morty quickly deduces that Rick has done it to get out of going to family counseling with his mother Beth and sister Summer, and they notice a syringe that was placed above Rick with a timer that was meant to go off a few minutes after they were supposed to leave for therapy. Rick denies the obvious (the syringe is timed to pour liquid on him that would turn him back into a human as soon as they leave) and Beth doesn’t argue with him on it and prepares to take the kids without him, but in an uncharacteristic Beth move she does take the syringe with her. This leaves him stuck as a pickle until they get back, but he can’t tell her the truth or else she’d knew he lied to get out of therapy.

In going to a therapist they’ve never gone before Beth is fully expecting the doctor to tackle Morty and Summer’s issues and why they’ve been acting out at school following Beth and Jerry’s divorce. But in mentioning that Rick couldn’t come because he’s a genius working on science, and having Morty interrupting with “he turned himself into a pickle!” Dr. Wong then turns the conversation toward Rick, Beth’s relationship with him, and how that affects her relationship with her children.

Meanwhile, Rick’s having the time of his life as a pickle. He gets, in this order, tossed around by a cat, cooked by the sun, rolled into the sewers, kills a cockroach and uses its body to move around in, kills a bunch of cockroaches and uses their bodies to creates a pickle super suit, kills a bunch of rats, flies out of the sewers, accidentally infiltrates what appears to be an elite Eastern European gang, befriends a vigilante who’s ordered to kill him, kills everyone else, and kills the main bad guy. It’s like a scene out of Die Hard, but instead of John McClane…it’s a pickle.

And it works! The show goes back and forth between Beth’s therapy session and Rick’s gleeful gory ridiculous adventure, in that seamless way that only Rick and Morty can do. Especially when Rick strides into the therapist’s office to finally join them, a bloody pickle covered in roach and rat parts, and asks for the syringe to finally turn back human.

This is the episode’s final twist (and this is why Rick and Morty might actually be the best written show on television right now): For the first time in I think the show’s entire history, he doesn’t get the last word. Dr. Wong calls him out on his behavior in a monologue that’s truly one for the books and the first time ever, Rick is left speechless. Beth, of course, injects him with the syringe afterward and he turns back into a human, and he and she make fun of therapy in the car ride home, but something’s changed in the dynamic between them. We know how short lived this kind of stuff is in cartoons, but hopefully this will last.