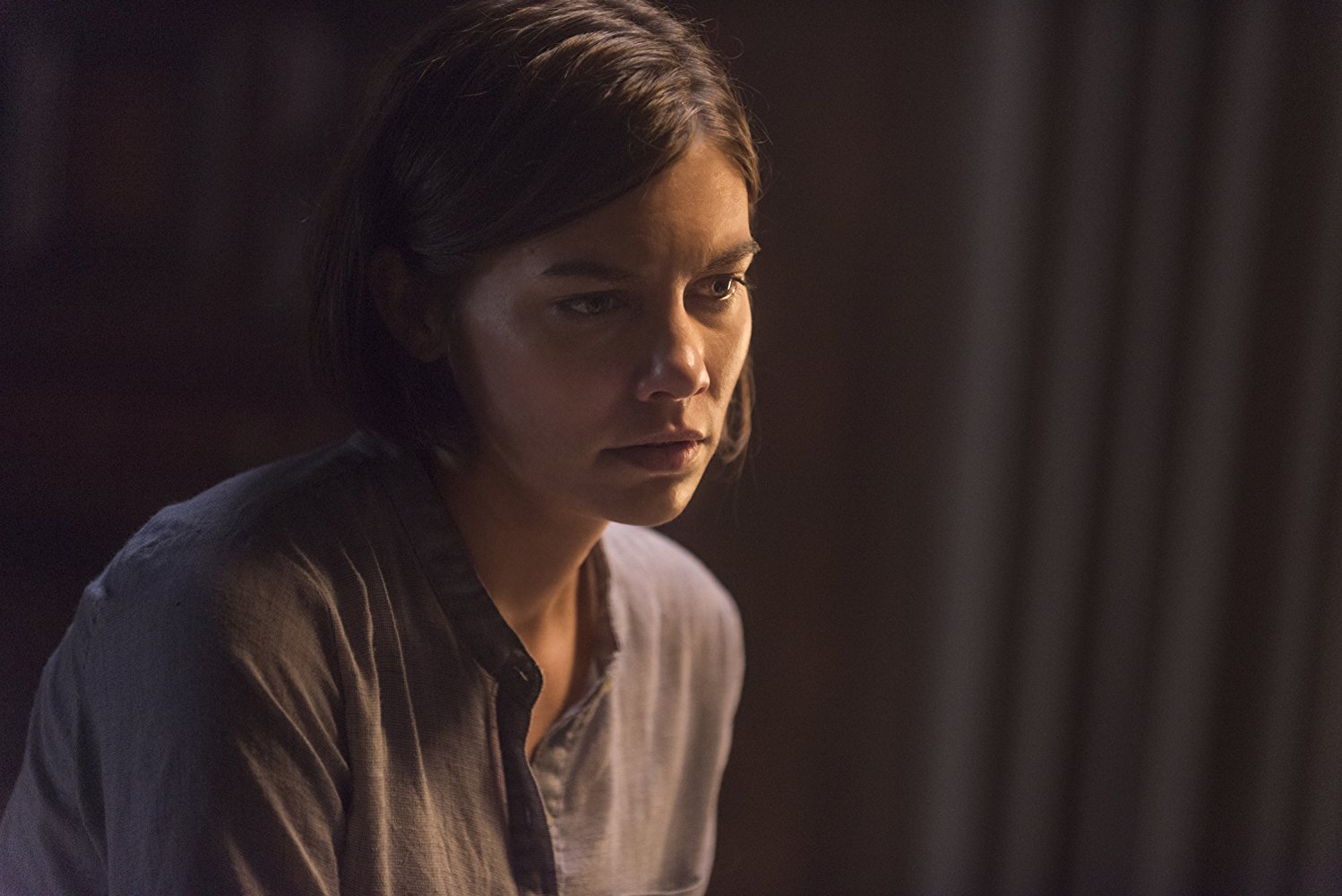 In this episode of The Walking Dead viewers were probably pleading; “Do Not Send Us Astray” but it seems those cries went unheard, as more losses are suffered, characters regress and plot holes get bigger.

The episode opens with Morgan standing in a clearing. Suddenly a vision of the savior killed by Henry appears, repeating “you know what it is.” Morgan moves to attack. Even if Morgan doesn’t know what “it is,” I do and it’s nonsense. With this one scene viewers knew that Morgan was no longer on stable ground. Once again TWD has made a character that made great strides to come to terms with their pas, regress to the worst point of their lives and I hate that’s it’s happening to Morgan again. 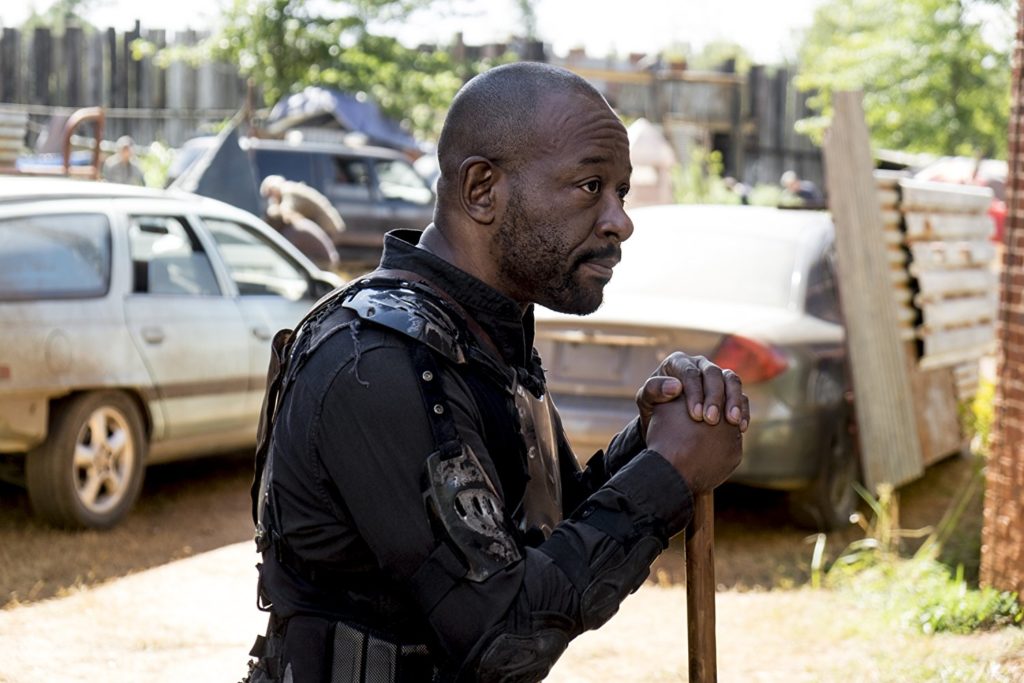 As Morgan tries to sort his head out, a horn is heard in the distance as he presses the horn on his steering wheel. The scene switches to two men in a van with the driver doing the same thing and it becomes clear this is a signal as Daryl and others start a chain, until the sound reaches Hilltop. With the message received, Ezekiel, Carol, and the others prepare to leave when Henry tells them he wants to help because he’s a good fighter. Ezekiel tells him to stay behind and help protect those in the house. With the pout on Henry’s face, I knew this boy was going to cause problems. Siddiq enters the infirmary and a woman we’ve never seen before starts to question him about his capabilities as a physician. Hearing he was only a “secondary EM resident,” she asks Siddiq if he ever performed amputations or even shot a gun, to which he replies in the negative. The lady scoffs (as did I) and says that he doesn’t know enough of anything, and in her experience “people who don’t know enough are more dangerous than people who don’t know shit” and I agree with her.

What this amusingly weird to me is that it’s something viewers have been saying from the moment Siddiq arrived. When Carl died, we lost not only a character that was integral to the story, we lost a character who actually served a purpose. Carl knew how to do what needed to be done and was also an emotional touchstone for Rick, Michonne, and the others, but what does Siddiq bring to the table? All we know about him is that he was more concerned with keeping count of walkers than humans, can’t shoot a gun three years into the apocalypse, and he’s a poor substitute for Carl. Yes, I’m still bitter.

The other thing about this scene with this lady is that it’s obvious the unnamed woman is either a doctor or nurse, which means 1. She’s going to die, no ifs, ands or buts about it, and 2. I thought Carson was the only doctor and medical professional around? This lady’s sudden appearance is a literal plot hole and is more proof the writers clearly left some notes on the previous season somewhere lying around, cause ish don’t make sense.

Suddenly it’s night time, Jerry sees a caravan of vehicles in the distance and signals to Maggie, she turns to the people behind her, orders them to “Get ready” and I get confused because IT’S NIGHTTIME. When we saw Morgan and the others it was still light out, but somehow it took the Saviors long enough for the sun to completely set to reach Hilltop, when this whole season we’ve seen people reach various locations faster than that on foot?

When Simon and his entourage reach the gates, Maggie contacts him on the walkie-talkie and lets him know that she’s not messing around and has no time for his Negan 2.0 antics. Daryl arrives and somehow, someway proves to be more accurate with a machine gun on a moving motorcycle, than Rick was standing still. REALLY writers? Really?

Morgan, Ezekiel, and the others arrive and it’s a free for all. Bullets start flying, the saviors apparently have expert archers — that we’ve never seen before — who start launching arrows at the Hilltopers and I was sorta impressed because Maggie’s plan actually made sense. For the first time, things seemed to be going right for my peeps. Rick and the rest of his crew arrive and help to drive the Saviors out of Hilltop, despite this victory he and Maggie know they’ll be back. Rick tells Maggie of his one-man attempt to kill Negan and she thanks him.

The next day, Daryl sees Tara and asks her if she’s ok — having seen her get struck by an arrow from Dwight during the fight. When Daryl gets angry, Tara reminds him that Dwight is only back with the Saviors because he was trying to help her. Daryl says it’s because Dwight betrayed them because that’s who he always was. Tara says that she was in Dwight’s position when she was with The Governor but Daryl doesn’t want to hear it, he’s convinced that Dwight tried to kill her, completely forgetting that Dwight was shown to be an expert marksman with a bow and arrow. Heck, it was Dwight’s accuracy that allowed him to kill Denise which Daryl saw fit to remind Tara of.

This conversation makes no sense when you look at what happened in the previous episodes. In “Dead or Alive or” it was Daryl and Rosita that talked Tara out of killing Dwight. It was Daryl that reminded Tara that Dwight turned against Negan to help them, so this sudden about-face in his opinion of Dwight is just another plot device that serves no purpose other than to create needless drama. 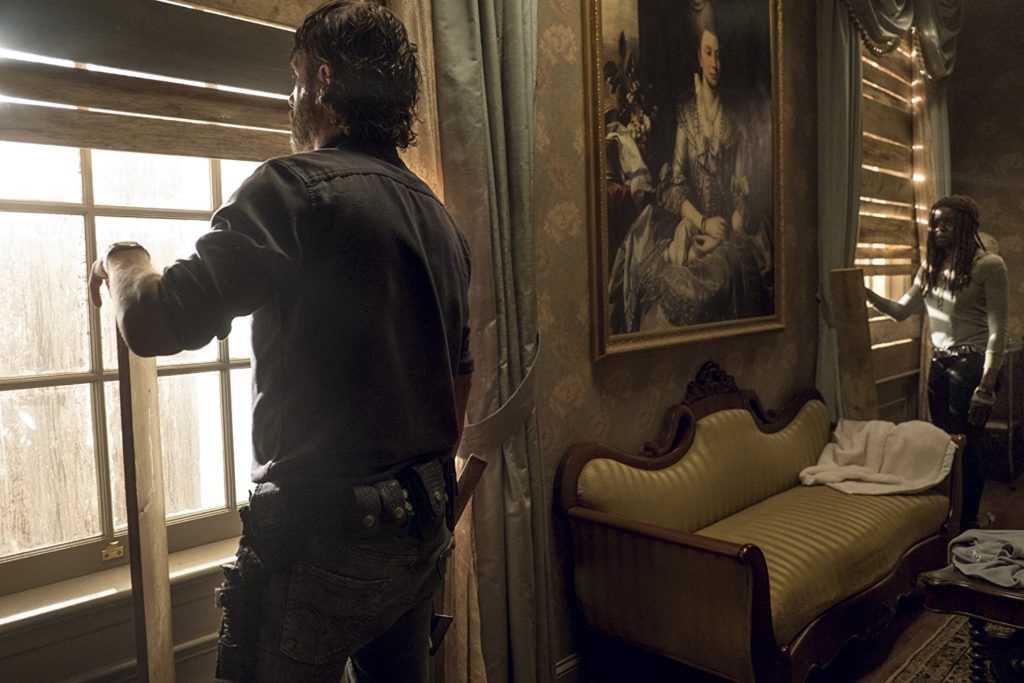 The scene switches to Rick in one of the mansion’s rooms removing boards from windows. As he struggles with one of the planks, Michonne walks in and offers him a turnip she saved for him. Rick ignores her offer and tells her he needs to get things ready for the next fight. Michonne puts the turnip down and, as she starts pulling planks from another window, Rick explains that he went after Negan because he had to.

I’ll be honest. At first I was worried this scene was a sign that Richonne was going back to where they were in the early stages of season seven. After Negan killed Glenn and Abraham, Rick and Michonne had closed themselves off from each other and stopped communicating. But I realized this wasn’t the case now, I think Rick was afraid to look at Michonne because if he did, he would break down. Michonne is the one person in the entire world that Rick can’t hide his feelings from, she is the one person who knows how Carl’s death has put Rick back in an emotionally delicate position. As in her scene with Maggie in the last episode, Michonne and Rick reminded me of what The Walking Dead used to be. It was these quiet moments that gave the show it’s heart and connected with viewers, sadly they have been few and far in-between this season and I’m afraid we may not have many more in the future.

As Carol talks to a wounded Tobin, Henry takes up a gun and sneaks away (lawd give me strength, this chile). It’s night time again (?) and everyone is asleep in the mansion, like there isn’t even anyone on duty. Rick, Michonne, Carol, Daryl, Maggie, Tara, EVERYONE is asleep. While the whole crew is inexplicably asleep, the people who were wounded start to turn and I started to laugh.

From the moment The Walking Dead began, one thing has been consistent with regards to the virus, you had to actually die either from a bite or natural causes before turning, but check this foolery. Now in season eight — because Negan said so — people can turn into walkers without a bite or even dying. Because Negan himself has become a convenient plot device for anything surrounding him, suddenly a cut from a weapon coated in walker blood magically turns people into walkers. The writing on this show has sunk so low in quality and consistency that Tara, who got injured the same time as Tobin, didn’t even break out in cold sweat in the time it took Tobin get a full-blown fever, turn, kill someone and be put down by Carol.

Last season, Rick’s left hand was stabbed straight through by a spike covered in walker blood and he didn’t even get tetanus. Abraham and other characters have been cut with weapons that were used to kill walkers and they didn’t die or turn, but because Negan needs to be a bigger baddie than he actually is, all the rules have changed.

In the end, Rick realizes that it’s the walker blood on the Savior’s weapons that caused people to turn, and Team Fam has to figure out a way to combat this new dilemma, while Henry causes the Saviors to get free and now Simon has more people on his side.

The writers are trying so hard to make Rick feel guilty about going after Negan, they have Tara say that her dying is karma’s way at getting back at her for going after Dwight. I abhor this particular story line of Rick being made to feel lower than dirt for wanting to protect his people, because Negan wants to force them into subjugation. I think this is a shi**y thing to do to a main character whose sole purpose is to protect the people he loves and respects.

The Walking Dead shows Sunday on AMC at 9/8c. Here’s a sneak peak at the episode nine episode “Still Gotta Mean Something”.