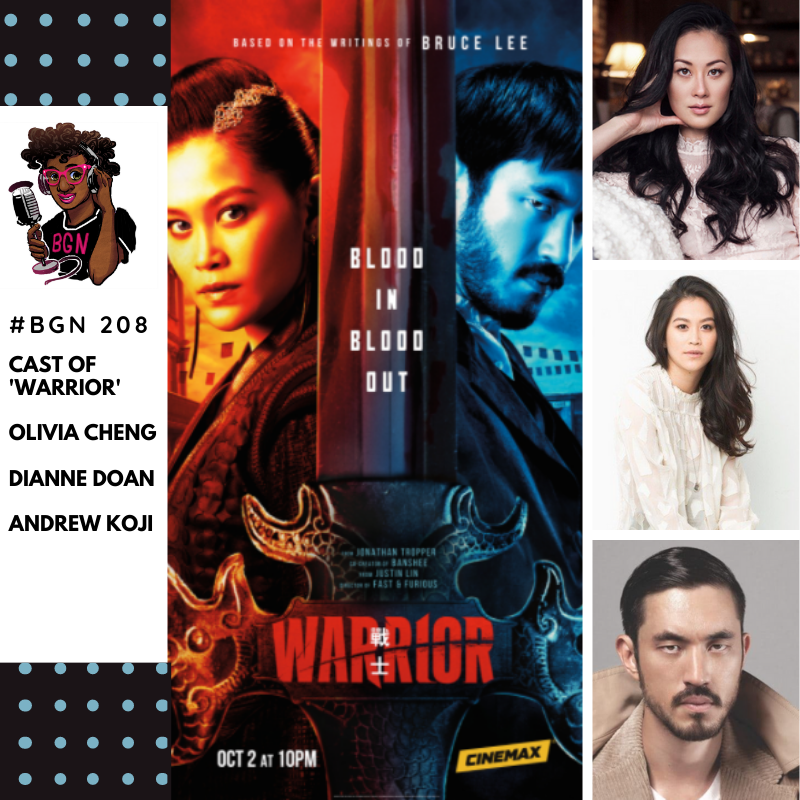 In a special episode dedicated to the Cinemax series Warrior —  BGN interviews 3 cast members from the show broken up into 3 segments.

Segment 1: Oliva Cheng plays Ah Toy in the series Warrior. A bisexual Madame in charge of the Hop Wei’s brothel. She takes an interest with Ah Sahm due to his connections with Mai Ling. Cheng has also appeared in ‘Deadly Class’ and was a former correspondent for ‘Entertainment Tonight Canada’.

Segment 2: Dianne Doan plays Mai Ling, the wife of Long Zii, head of the Long Zii Tong. She is actually Ah Sahm’s sister, Xiaojing, who ran away from China to the US to escape from her abusive husband Sun Yang, who forced her to marry him to prevent him from killing her brother. As Long Zii’s wife, she is the de facto second in command of the Long Zii gang. Doan is known for portraying Lonnie in the Disney Channel Original Movies Descendants and Descendants 2

Segment 3: Andrew Koji plays Ah Sahm, a Chinese martial arts expert of partial European ancestry from his white American grandfather, Ah Sahm travels to San Francisco to find his missing sister and ends up being involved in the city’s gang wars. Koji is scheduled to appear in the upcoming prequel for the G.I. Joe sequel Snake Eyes.

The Cinemax Original Series, ‘Warrior’ is Based on Bruce Lee’s Original TV Screenplay