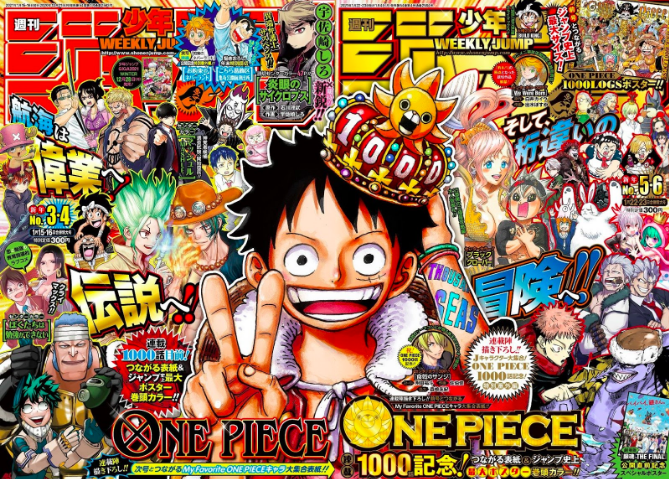 One Piece recently celebrated its 1,000th chapter, and that’s an immensely impressive feat for any long-running story.

The popular Shonen manga and anime by Eiichiro Oda has been entertaining and delighting fans since Monkey D. Luffy first sailed for the Grand Line in 1997. Shueisha wanted to commemorate the series’s 1,000th chapter by holding its first global character popularity poll to give the fans a way to celebrate their favorite characters. On January 3, Shueisha launched the World Top 100 Campaign. It will run until February 28 and will decide once and for all which One Piece character is the best out of the series’s 1,000 chapters.

In case you’re not familiar with the long running Shonen series, One Piece is the story of Monkey D. Luffy and his gang of misfits called the Straw Hat Pirates. Luffy was inspired to become a pirate by Gol D. Roger, who left his pirate fortune hidden at the Grand Line before his execution. Luffy and his pirate crew undertake this voyage with each of their own missions and aspirations ahead of them, like Nami, who seeks to create a map of the world, and Zoro, who seeks to become the greatest swordsman in the world. The crew collects their own amount of infamy through defeating some of the high seas’ most notorious pirates.

In terms of art style, the series definitely stands out from the crowd. What’s easy to see is that One Piece and Eiichiro Oda have their own particular style of character. Oda initially was worried that his style would be off-putting to readers of his work, as the more common big-eyed character style was beginning to take hold in the manga/anime world around One Piece’s beginnings. However, the unique style of the characters became one of the series’s major selling points, as the room for more eccentric character designs and loose movement gives the series its own visual identity. You definitely know a One Piece character when you see one.

In addition to the amazing World Top 100 Campaign, there will also be new content coming to celebrate the 27 years that Eiichiro’s masterpiece has been delighting fans and making every young manga and anime fan wish they could be a pirate. The first of this new content is a New York Times full-page color ad to promote the campaign to the masses. Another exciting tidbit is that fans will receive prizes for their participation during the voting period.

Don’t think the fun stops there. There’s also new trailers that will play on the homepage of the voting website that fans can watch, one of these being a trailer for a live-action project that’s coming. Fans will get to see the adventures of the Straw Hat Pirates in live action! This is not to be upstaged by the amazing and beautiful art drawn by fellow Shonen Jump authors of the One Piece characters. This is a way for Oda’s colleagues to give tribute to his long-running and successful series.

Fans will also be receiving new content in the form of collaborations with other magazines under the Shueisha umbrella, and even the largest collection of free manga volumes the series has ever put out into the seas. But one of the most precious bits of content is a letter written by creator Eiichiro Oda, looking back on the 27 years we’ve all spent with this beloved series.

So how does one participate in the character popularity polls? Well, each fan can vote once a day on the website, One Piece World Top 100. Each day the fans can cast their vote for their favorite character, perhaps “Fire Fist” Ace, until February 28 when the final votes will be tallied. These votes can be made on the website or through mail-in postcards. For their participation, fans will be awarded with random AR models of the characters to take pictures with using the camera app on their devices. In order to show the diverse range of the fanbase, each region will have their own top 100 characters to show how each section of the fanbase views the series.

The big message of the 1,000 Logs Campaign and the character popularity poll is to unite fans and the world as one by launching a new slogan, “We Are One.” Through the new content and the character poll, Shueisha is stepping forward in this endeavor and really sending a love letter to the fans of the series, who have stuck with Luffy on his adventures and really given the series the room to last as long as it has. Twenty-seven years is nothing to sneeze at, and the anime community has had a lot of fun, shared a lot of tears, and made a lot of memories with the Straw Hat Pirates along the way.

So here’s to One Piece, whether we’re building a map of the entire world, aiming to cure all illnesses, trying to become the world’s greatest swordsman, or searching for Gol D. Roger’s pirate treasure at the Grand Line. We Are One. Thank you, Eiichiro Oda, for all the great adventures along the way.