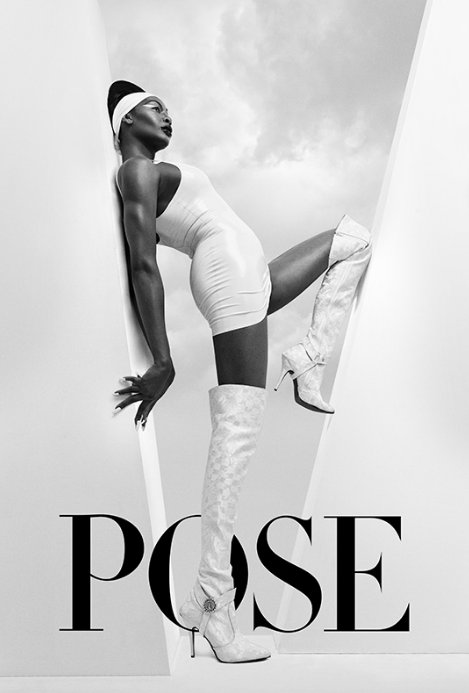 FX has performed its magic once again, but this time all the accolades should go to its spectacular production, Pose. Pose (2018–2020) is one of the most exciting and campy depictions of the LGBTQ+ community, specifically drag ball culture. Pose is not just another show that features queer people but is instead a whole new world to explore and understand.

Since making its debut, the series has given members of the community a renewed sense of acceptance, diversity, and inclusion in media. Having spent several enjoyable hours viewing both seasons of this amazing recreation of cultural events that took place in the ’80s and ’90s, known as ball culture, my sense of belonging and respect deepened for my community and their struggles. While Pose’s message of safety and inclusion is at the forefront, it doesn’t however romanticize or minimize the negative reality of the LGBTQ+ experience.

Pose has brought to light the LGBTQ+ subculture of drag ballroom, which encompasses high-fashion, makeup, houses and dancing competition (vogueing), as well as the social and political issues of the time. Houses are built from broken, lost, discarded souls who are looking and longing for a home and love. This subsection largely catered to the Latin and Black communities that originated in New York City and later branched out to other cities, like Houston. In these gatherings there would be categories, prizes, and glory for winning each event. The show also tackles issues of the AIDS/HIV epidemic that devastated the Pride community.

Creators and screenwriters Ryan Murphy, Brad Falchuk, and Steven Canals have given us a production that features the largest display of trans and queer people in a single show. It explores trans stories from actual trans people, and it is about time. Embracing the title “pose” and its multitude of meanings. which includes to assume a position or to pretend to be. All the cast members do an amazing job at becoming their characters. Pose tells the trans stories of people through their own eyes. The title is symbolic in that it allows many individuals to finally be who they want to be without having to pretend any further.

From the rich tapestry of its narratives and characters that this series provides from its first to last episodes, this show does not shy away from evoking an emotion, from its heartbreaking scenes of Damon Richards (Ryan Jamaal Swain) being kicked out of his home, to Blanca Rodriguez (MJ Rodriguez) getting her HIV diagnosis. With this news in mind, Rodriguez decides to start her own house and be a mother for all those who need it. Angel (Indya Moore) is one of the most dynamic and real characters. Her vision is what many little gay boys wish to have one day. She wants a home, a family, a partner, and her desires are what brings her to the top. Of these amazing actors, Lil’ Papi (Angel Bismark Curiel) has won the hearts of his viewers, and mine. Lil’ Papi is one of many who inhabit the House of Evangelista, a clear standout for inclusion and representation. As a gay Latino boy, Lil’ Papi is a symbol for all the gay boys who don’t fit one box in the gay community and who are worthy love and more.

The picturesque world of Pose in Season 1 takes a deep look at the LGBTQ+ community and each character. Blanca, as a house mother, tries to push all her kids into doing something more with their lives. Damion, a dancer, is pushed into dancing school with the help of Blanca after missing the deadline. It is here that these two distinctly different narratives merge and set the stage for the rest of the series. After the House of Angelista is assembled, they discover that just because they are winning within their own community, many others outside of it won’t be as accepting of their accomplishments. Through struggle and victories from their in-ball culture to the larger outside world, they never lose sight of what really matters: the families that they are a part of. The closing of Season 1 ends with Blanca accomplishing one of her many dreams while still having more to give.

Pose is based on reality but is not completely historically accurate. There are many aspects that have been updated to fit the current time. This all helps to create more engagement with the audience. The show is a positive depiction of what a House represents in the “GLBT” community, (which is now known as “LGBTQ+”). It is one of few shows that rejects the overdone narrative that gays are either discarded, sidekicks, or tragic creatures who should be looked on with pity. One thing to note is that each house is different, and mothers and fathers have different requirements from their children.

While Season 1 can be seen as an adventure of self-discovery, self-fulfillment, and selflessness, Season 2 builds on that but diverges to the cultural and social realm. The elements of community, social injustice, and even the hypocrisy of our own community are at the heart of Season 2. A monumental victory for the community crosses over to when pop-icon for many older gays, Madonna, reveals her hit single, “Vogue.” This opened non-gay mainstream media eyes to the subculture that thrived. This would soon be followed up by Jennie Livington’s (1991) documentary Paris Is Burning. I hope that next season touches base with this cultural artifact. Season 2 has an ending that is simply brilliant, a revealing of love and labor over what they have accomplished in Season 1. The seed that was sowed in Season 1 is revealed to have grown in Season 2.

If there are any faults to find from this show it is this: In a spectacular display of marginalized communities, there are moments that the writing gets away from reality. When two gay individuals are involved in a shade battle, one does not simply utter large and overly complicated paragraphs at the other without expecting a response. But that is exactly what happens in the show. The writing and not the characters is what is being heard. The way Prey Tell (Billy Porter) distributes shade is amusing, but at times unrealistic. People reading each other would not stop after one read. In fact, it simply feels lazy.

Having been part of a house with a mother, I found a lot to appreciate about Blanca Rodriguez, a Black Puerto Rican. The show allows Rodriguez to grieve for her diagnosis, but it also allows her to push herself and her house to accomplish their goals. Rodriguez is trying to leave a legacy behind, something that her children can carry with them into the unknown future. By the end of the series, she and her kids (house) have won many trophies and have managed to make a name for themselves in the community. While this is an ideal house, it is not representative of how all houses are managed, or even what they all aspire to. Mine never did.

Being gay is far from easy — you get bullied all the time growing up for being gay. Then you get bullied from other gays for being too gay, too tall, short, too young, too fat, too old, too hairy, too smooth, too fem, or too masc, all from the same community that says you should be yourself. Pose really shows how the community is for someone who lives and experiences it — how sometimes your very own community will turn their backs on you for not fitting a certain box they created. This series does not romanticize the hardships of being a queer person, even in our own community.