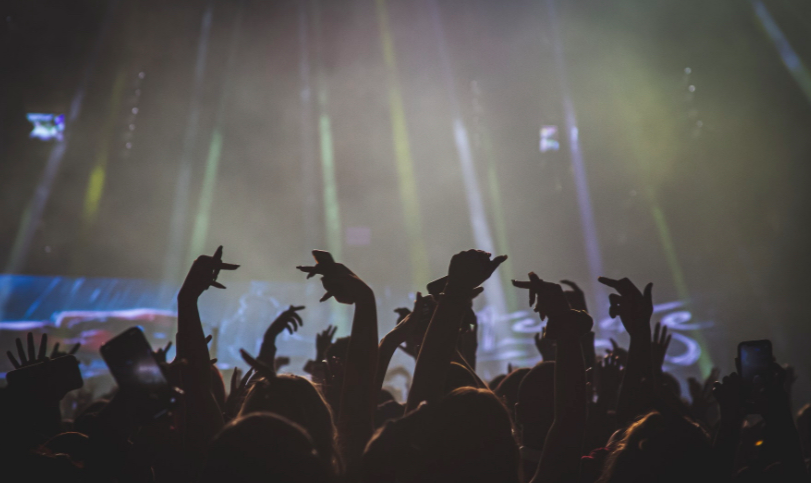 “Powerhouse was a movie,” was the consensus of concert-goers as tweets from fans lit up the JumboTron in Wells Fargo stadium — whether it was a horror, comedy, or drama remains to be seen.

Powerhouse has been a Philly staple for as long as I could remember; when I was growing up, it was the go-to event for young, Black millennials. The annual concert series thrown by Philly’s Power 99 has always been a showcase of the hottest acts in the game. The event was synonymous with Halloween. Once it started getting cold enough to wear a bubble jacket and throw on a pair of Tim’s, you knew Powerhouse was on the way. Buzzworthy moments such as the Offset proposing to Cardi B were always what made Powerhouse so great — anything could happen. For some reason or another, I was never able to attend, but at the ripe old age of 29, I finally got my chance.

Doors opened at five, and I made my way to Wells Fargo Center in the heart of South Philly. Armed with my phone, a large drink, and a basket of nachos, I found myself a good seat and hunkered down for the night; the setlist had performances lined up until midnight. The biggest draw by far was Megan Thee Stallion, Da Baby, and Migos, but there were some great acts in between and a special surprise guest who had everyone excited.

The show kicked off with a performance by Afro B best known for his single, Drogba (Joanna), which blew up the charts in 2018. As the smooth Afro beats and catchy chorus pulsated through the stadium, you couldn’t help but move your hips to the beat.

Shortly after Afro B left the stage, the self-proclaimed “King of R&B” Jacquees graced the stage. While his title is questionable, there’s no doubt that the ladies went wild for the confident crooner. Clad in a blue bubble coat and jeans, Jacquees made the ladies swoon with his pelvic thrusts and signature “eeeee” runs. The adoring crowd sang along to his hits including Bed and You.

The first act of the show was concluded by America’s sweetheart, Saweetie, as she struts onto the stage in fur coat and Daisy Dukes. She twerked and bopped along to her single My Type, which quickly became a summer anthem.

After a quick pizza run (yes, the Wells Fargo Center sells giant pizza slices that covered my entire lap), I settled in for the second act. There was a long lag between sets but the house DJ kept the crowd entertained with classics such as Back that Azz and This is How We Do It.

After I crushed my oversize slice, PnB Rock dawned on the stage, a Philly native, rapper, and songwriter best known for his 2016 hit, Selfish. Dressed in head to toe white ensemble with a splash of color, Pnb Rock led the crowd to his remix of French Montana’s Unforgettable. In a stadium full of cell phone lights, the vibe was just that —unforgettable.

Following PnB another melodic MC, A Bougie Wit The Hoodie hopped onto the stage and, true to his name, he was wearing a green hoodie. His set quickly had a moody tone complete with a backdrop of a rainy night. Despite some difficulty with his audio, I managed to enjoy his performance especially as he launched into his emo anthem, Drowning.

Shortly after A Bougie’s set, there was another long break, so I took the opportunity to grab a soft Philly Pretzel from the concession stand. By the time I got back to my seat, the Snowman, aka Jezzy, appeared on stage dressed in a khaki Dickie’s suit, snapback, and his signature shades. I felt like I was back in high school jamming along to hits such as Soul Survivor and Put On. The Atlanta-based rapper worked the crowd. Although his time was up, he refused to leave until he gave the crowd exactly what they wanted.

Following Jeezy’s performance was the unquestioned It girl of 2019, Megan Thee Stallion. The stadium was whipped into a fervor as the Houston native graced the stage with her strong knees and cheeky personality. Representing her hometown, Megan was dressed in a cowboy hat and black leather chaps. She performed her mega-hits Big Ole Freak and Hot Girl Summer to an audience full of hotties and clapped her cheeks for all to see. A staple of a Megan Thee Stallion’s performance is to bring her “hotties” onto the stage for her rendition of Simon Says. Eager fans jumped the barriers to twerk the hearts out for Megan, and she gave resounding approval to all of the performers. With a flip of her laid hair, Megan left the stage, and I was left to my own devices waiting on the next act.

I next fell victim to a tray of Old Bay fries. At this point, we were five hours into the night. Sustenance was a must, and boy, did I need it by the time the next performer hit the stage.

Lil Baby was high energy from the gate, dressed in a red puffy jack and white jeans. The Atlanta-based rapper performed hits such as Yes, Indeed and My Dawg. My eagle eyes spotted one of his dancers who was one of the standouts in Megan Thee Stallion’s impromptu dance contest. While bopping along seamlessly with his back up dancers, Lil Baby welcomed the biggest surprise of the night to the Powerhouse stage — Meek Mill!

Philly’s own hero, Meek Mill pulled up to the scene and the cheers from the crowd were deafening. It was truly a homecoming as the exonerated rapper broke into his anthem Dreams and Nightmares. Anyone who is from or around Philly knows the song by heart. Imagine 20,000 people screaming, “Hold up wait a minute, y’all thought I was finished?/When I bought that Aston Martin y’all thought it was rented?” The pride felt in that stadium was unspeakable as we saw Meek joined on stage by loved ones and supporters grinning ear to ear. He took off with a performance of Ima Boss, sporting a Red Phillies cap, mic in hand spitting fire. Meek was the highlight of the entire night hands down.

After that performance, I could not even think about eating, I was so overjoyed. Next up, was Lil Uzi, another favorite son of Philly. Stumbling across the stage with his signature shoulder pop and trippy visuals, Uzi was a sight to behold. He immediately asked the audience “what’s popping” before performing hits such as XO Tour Llif3 and Money Longer. After throwing handfuls of money out to the crowd, Uzi excused himself off the stage with a wry smile.

The next hotly anticipated act was Da Baby, a Charlotte-based rapper who embraces his small stature but won’t let you forget he’s a thug. One couldn’t help but smile as he tiptoed onto the stage to his biggest hit, Shug. Joined on stage by giant babies, Da Baby dressed in all black won over every woman in the audience. At one point, he jumped into the crowd, arms up with a huge smile across his face, his grill glittering for all to see.

The final act of the night were the headliners, Migos, but unfortunately, no one quite knows what happened to the Atlanta trio. Thirty minutes after Da Baby left the stage, the group was a no-show. It was a bit of a let down considering how long fans waited to see them perform. Once it was clear the Migos were not performing the already thinned out crowd disbursed.

Would I recommend Powerhouse again? It had its high points, and it definitely had its low points. Although the lag between sets seemed unbearable at times, the crowd waiting patiently, dancing in the aisles, and chanting “aye” rhythmically. You got the experience of a club but in a much bigger setting. The performances themselves were enjoyable especially when Meek Mill appeared. Here’s hoping that next year will be a step up.