The episode has the kind of dramatic opening that makes you think something exciting is about to happen or maybe it’s a prelude to what this season will be. What else can a search for God be except exciting and most likely dangerous. We start immediately after last season’s finale with our trio in Tulip’s car. Cassidy is complaining at length about some random topic while Jesse humors him and Tulip can’t resist replying. All is right in our world. It’s a reminder that this is essentially a road trip with a stranger than usual destination.

I enjoyed seeing their interactions here and in the dinner. Last season was filled with so much desperation and tension between these three. Jesse desperately trying to be the man his father wanted him to be which caused conflict with the other two. Tulip desperately wanting to get revenge and for Jesse to go back to his old self. Cassidy was perhaps less desperate but he still sought acceptance from Tulip and Jesse. Now everyone seems more settled. It only took Jesse letting Cassidy almost die, Tulip feeding him a bunch of animals, Jesse being willing to kill Carlos for her and Tulip no longer needing him too. This is an interesting bunch. Although how long this peace will last with the big secret Tulip and Cassidy are keeping is anyone’s guess.

The nice drive couldn’t last. Tulip’s speeding catches the attention of the highway patrol. Instead of pulling the veteran ruse again, Jesse encourages her to gun it. Who goes on a police chase with a low tank of gas? These three. They’re basically an echo chamber of bad ideas and I love them for it. We go from a conversation about foreskins to a Technicolored chase scene set to “Come On, Eileen” and all of it before the opening title card.

Can’t run on fumes so the chase eventually ends. As a black woman, Tulip always seem calm in her interactions with police. I don’t know whether that to attribute that to her being a badass or them living in a world where this isn’t a problem. The police yank them out of the car but it’s Cassidy and his umbrella, drugs and his general weirdness that attracts the most attention. We all know Jesse is going to use Genesis to get out of this. Interestingly, while Jesse is fine with using Genesis for fun, making the cops hold hands and sing to him, Tulip sees it as mind invasion and wants him to use it as a last resort. Turns out it’s the random gunfire killing all the cops that saves them. They make it out of there without knowing that the Saint of Killers is doggedly following them on foot with what I’m assuming is a magic hell gun that can inflict massive amounts of damage from a distance.

“It’s an unlucky start,” they all agree. Although Cassidy did suggest it had to do with Genesis at first. Everyone listen to Cassidy. At least in this once instance. They meet up with Jesse’s religious scholar friend in the hope that he came across somewhere God might like to hang out in his studies. This friend, Mike, has a girl in a cage in his barn. But no worries, it’s a good thing. It’s part of his addiction detox program. Have a problem with social media? He’ll put you in the cage, cover it and leave you there until you no longer feel the need to post every other minute. Mike takes the news about God a lot calmer and with less disbelief than I expected. Unfortunately, he doesn’t have anything for Jesse even in his extensive library. “You called heaven on an angel phone to discover God’s gone to roam the earth. What book is that,” he tells Jesse.

Jesse believes that not only can he find God but he can hold him accountable for leaving. This entire mission comes down once again to his father. Papa Custer told Jesse that he had a destiny and Jesse believes this is it. I guess he makes Mike believe too because he reveals that one of his cage therapy patients,Tammy, claimed she saw God. They go to Tammy’s strip club to find out exactly what she knows. It turns out to be not much but at least we now know that God likes jazz and Cassidy shouldn’t be left alone in a strip club.

Throughout the episode there have been moments when Tulip almost finds out the fate of Annville. Each time she’s drawn away before she can hear the name. They have no idea of the destruction they left behind in Annville and with the gas station attendant and Mike. They really have no idea of the destruction that is coming for them in the form of a scary cowboy from hell. They didn’t really expect the journey to find God would be easy?

I have a few tray observations. During the fire fight, it was nice to get a peak into both how seamlessly Tulip and Jesse work together and what kind of past they had to give them that kind of experience. I did think seeing them all in the same bed was cute. For the most part I dislike love triangles. Occasionally there’s an underlying tension to their interactions that I mostly ignore until the show shoves it into my face. This love triangle feels a lot like trying to make ‘fetch’ happen and I wish they would let it go. It would be so much easier if they worked out some kind of relationship between the three of them. A girl can only hope. 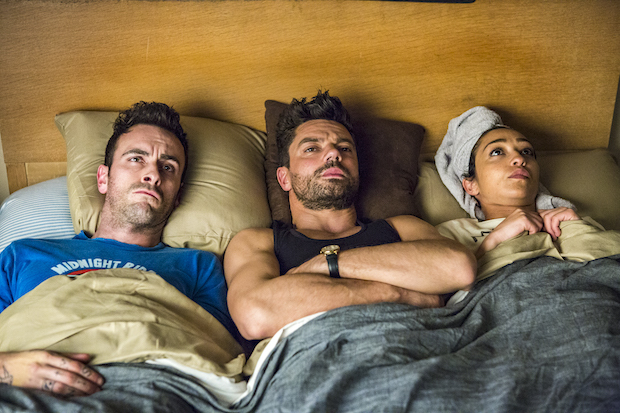 Songs from this episode:
Come On Eileen” by Dexys Midnight Runners
Strange Feeling by Billy Stewart