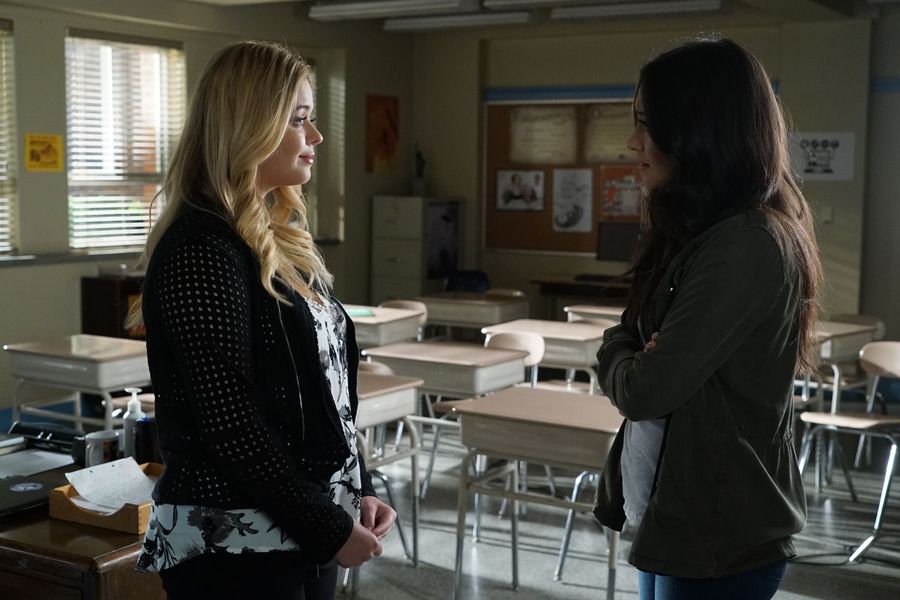 Teen Vogue recently lauded Pretty Little Liars for its devotion to developing women both behind and in front of the camera. It’s had swaths of female directors and writers (not to mention its showrunner I. Marlene King) and has made the show’s cornerstone the relationship among the Liars. King’s been open to pretty much all stories (as you can probably tell) “except ones that tampered with [the Liars’] friendship.” And King herself says, “I do hope that we showed our fans what friendship looks like: girls supporting girls, women supporting women. I didn’t want the girls to be catty with each other. I wanted them to have mature, healthy relationships.”

With this mission, we can be more than reasonably certain that Aria, who spends the episode negotiating with A.D for a way off this ride, isn’t going to betray her friends for a happily ever after with Ezra. So what if A has a potentially damning file on her? And what’s in it that could cause Ezra, who already knows plenty about Aria’s bad decisions, into Nicole’s arms? It’s possible she’s just playing A.D (like Spencer did when she teamed up with the A-Team), but Aria’s overall panic makes me think it’s way less sophisticated than that. So unless King’s decided this “no tampering with girls’ friendship” rule is null and void in the final season, Aria’s detour to the dark side is an unwelcome waste of time.

That being said, PLL’s “mature, healthy relationships” thing hasn’t extended to the girls’ romantic lives. Even the girls’ major loves, the ones they’re still with and/or orbiting, have been alternately abusive and shady. Paige bullied Emily relentlessly and even tried to drown her but now turns down coaching jobs to be with her. Toby plotted with A, Caleb spied on Hanna, and Ezra plotted to get close to Aria for his book about Alison. Still, PLL managed to make excuses, however lame, for them.

But then we look at Alison who was (and still is) manipulative, cruel, domineering, and still a viable love interest for Emily. Other love interests at least have the benefit of time turning them into supportive partners, both in romance and in the hunt for A. That’s not the case for Alison, who continues to slip back into old habits like treating Paige like dirt and manipulating Emily. But PLL stops short of dealing with it. Are we supposed to forgive Alison because her life sucks? Emily would, and has, argued yes (sigh) so I don’t think we’ll ever get anything remotely like accountability for Alison. Instead, Alison’s redemption is tied to the sadism of their stalker. The worse they become, the more we’re supposed to feel for Alison.

That’s no more apparent than this week where A.D sends Alison, who’s decided to have an abortion, to a baby store to make a registry (A.D would have a fine future with the GOP with that kind of taunting “pro-life” message). And just for funsies, A.D tells Alison the fetus she’s carrying isn’t hers but Emily’s. Yes, it’s gross even by PLL’s increasingly gross and violating standards.

All shows teach you how to watch them eventually. That’s why we know Aria’s not really going to join the A-team, and that’s why I fear Alison and Emily are going to end up raising a baby together. This is a show built on plot devices, and this is a perfect. It’ll create conflict with Paige, and if Alison decides to have the baby, it’ll link Emily to her forever. After seeing Alison intentionally dangle romance in front of Emily to keep her close, this is extra depressing and sad because Alison wouldn’t be above using a baby to manipulate her, too.

I wish Pretty Little Liars was as good at female relationships as it clearly wants to be, and as it has been in the past. It’s managed to do complicated well before (take Mona and Hanna for example), and it could do that same thing with Alison and Emily if it just bothered to actually confront the ugly parts of their relationship instead of just letting them be. This is an opportunity for it to do so, and until it does, it’s impossible to feel any warm fuzzies for the two or their probable future together.

And I don’t even want to consider whose sperm fertilized the egg.

Thrilling Mysteries to Watch If You Love ‘Pretty Little Liars’