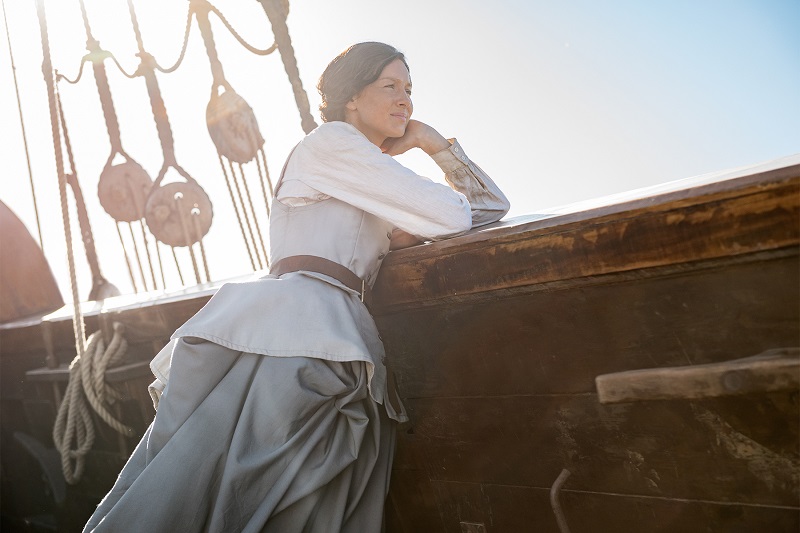 I am picking up the Outlander torch, Blerds, not in disagreement with anything the previous writer may have said. No, I am wasting my words on what we now know as a racist, misogynist show to continue the important conversations that must be had about this show.

With that said, let’s get into the episode.

Claire is problematic as a character and as a woman in this fantasy story world. She isn’t the only problematic piece of the Outlander story. You probably heard about the Outlander fandom fuming over the Buzzfeed piece “How Outlander Avoided the Stereotypes of Its Source Material” that exposed the racism in the books that thankfully did not translate onto the small screen. The piece “How Outlander’s Middle-Aged White Woman Fans Abandoned their Real-Life Claire” looks at the problems between the fantastic expectations versus the real actions of Claire’s Trump-supporting white fans. There are plenty of problems in Outlander, but today, we will hone in on just one, and that is Claire herself.

For someone who has studied up on the period enough to stock medications she may need and look up natural remedies for common ailments that had no cure in that time, Claire really fails at understanding the place of a woman in this time. And how could that be when she has fought similar battles in her own time. It seems that many of the scrapes that Claire gets into in episode nine are of her own making through her own arrogance.

Claire and Jamie are left to commission a ship and a crew to take them to Jamaica, where Ian, Jennie’s son, is probably headed. You’ll remember from last week that Claire’s meeting with Jamie’s current WIFE was met with hostility and gunfire. Jamie saw the only remedy as paying her off and setting aside that marriage. He would go back for the jewels he found while searching for the “White Witch” (another name for Claire) decades before. The jewels were well hidden. He got Ian to swim out to the island where the treasure was located, only to see Ian kidnapped by Portuguese sailors. They found out that the ship was bound for Jamaica.

Their mission was to go after Ian. Keep your head down, Claire and stay alive until they got to Jamaica. Well, Claire and her arrogance start to piss off the captain and the crew when she questions the reason everyone has to touch the good luck charm on the ship. They explain, but she laughs! Jamie has to remind this woman that SHE IS BAD LUCK just existing aboard the ship and she needs to slow her roll. She does not, later insulting the Captain’s need to follow superstitions later when they are dining below deck. The two of them. Alone. Where he could kill her and Jamie could not stop him.

Once again, Claire studied the era! Remember all that research she did when started the trip? She knows how women are treated and how she would need to act in order to remain alive for her mission. Yes, Jamie was there to protect her, but even he can only do so much with a busted arm for most of the trip. The woman’s arrogance seems to overcome her ability to remember where she is and what her mission is (find Ian), causing her to do things that not only derail the mission but puts everyone’s life in danger. 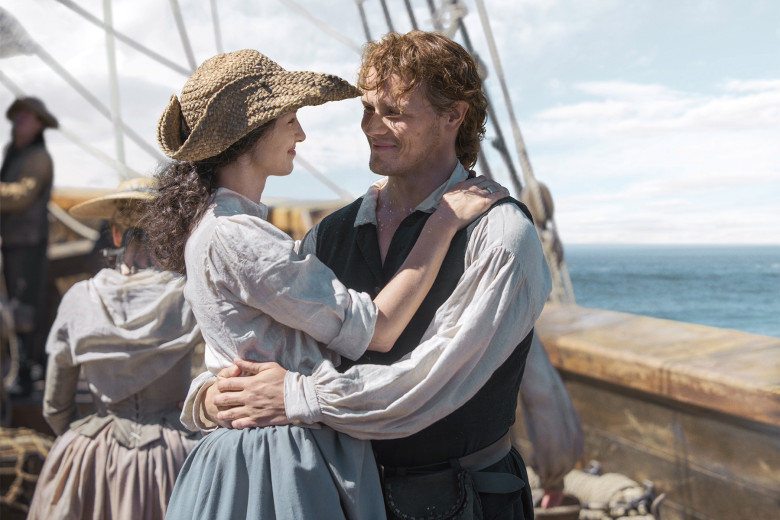 There is a tender moment when she and Jamie are post-coital on a pile of sails, and he says that he loves her gray hair. **Swoon** That moment is erased once the ship hits still waters and the luck question come up again. I thought for sure that Claire would put her foot in her mouth and get herself kicked off the ship. Instead, one of Jamie’s old friends thinks he is the jinx and he tries to commit suicide, which Jamie thwarts. The crew still wants blood until Mr. Willoughby (another problematic character) stands and makes cringe-worthy account of his journey to Europe. He later reveals that he knew rain was coming. He told his tale and put his story—in the form of written papers—into the sea. The wind picks up and rain comes.

An English ship soon comes up and hails them. Jamie says they may take on men. I get scared that they are going to take Jamie! But no, the very young captain explains that most of the crew has died. He explains the disease. Claire instantly knows that it is typhoid fever, a disease that’s cured with antibiotics, cleanliness, and fluids. Claire has been vaccinated against it. She suddenly feels her doctor’s duty calling and feels she must board the other ship to help. Now, Jamie is fully aware of what the hell is going on. He knows that she is a woman who is in danger unsupervised around the macho Neanderthal-like behaviors sailors have—even if they are British army. He warns her to stay, but she goes anyway. 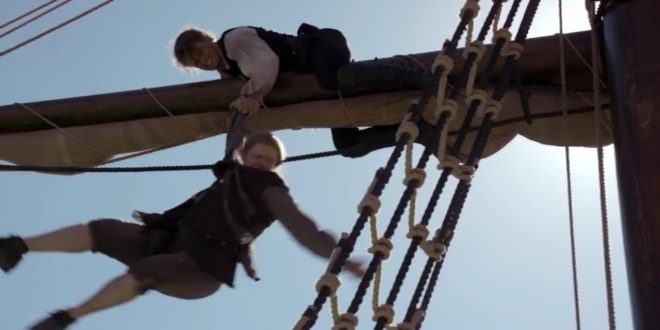 A little hilarity in this episode came from the side story of Fergus and Jamie’s stepdaughter. The girl took every chance she could get to call Claire “The WHORE” (pronounced WHO-OAR) as if it’s a second word for “stepmom”. Fergus, it turns out is the real WHO-OAR, having bed every young damsel from Lollybroch to Edingburgh. Watching the two of them in love, but with so much of an opinion of their elders was comical. I kept thinking, just wait lil’ girl, you got a playa on your hands. Fergus is going to show you a thing or two.

I guess we actually have two problematic women in this episode.

Back on the British Man of War, Claire does a lot to help, but I am seriously screaming at the television at this point. That woman needs to get herself back into Jamie’s shadow! You are not safe Claire! They are going to steal you!

As the show ends, guess what happens. Sigh.

I guess next week we get to Jamie’s half-kill his pretty self to save a chick who is too stupid to remember what era she is in. You did the research, girl! How are you this stupid? I can’t…

And then, a little voice in my head goes “You know what Claire’s problem is, don’t you? White privilege.”

Think about it folks.

Until next week, Outlander fans.