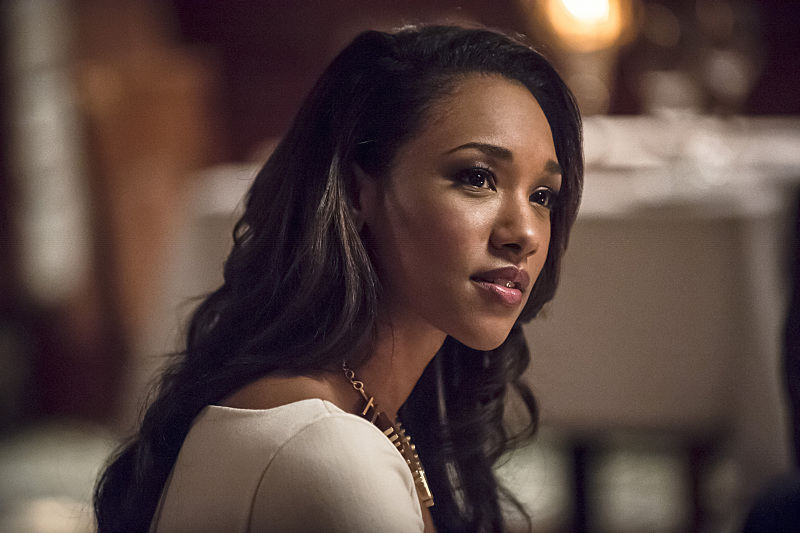 Even if it means messing with The Flash the time line  ????

I’m going to keep this brief, partly because I’m writing this from a biased standpoint. I’m an Iris West fan and I want her to do big things. I want to get to know her character better, and I’m hoping that all the upcoming Iris centered episodes will allow her to shine. With that said, a girl can dream, and hopefully episode 10, titled “Borrowing Problems from the Future,” is setting the stage for a stronger Iris narrative.

This episode is more focused on Barry and Iris’ life together, and we get to see them finally living together. They still haven’t unpacked their apartment, and seem more content with lounging in bed together, although pointedly missing from the episode are any steamy bedroom scenes, (I’m dying y’all!).  What we do get from this episode is plenty of that good, old Barry Allen worrying, though in this case it’s more than justified. Knowing that you might only have 4-5 months left with your love is depressing AF.

As always, Iris can sense that Barry is unsettled about something, and urges him to confide in her. Barry is resistant at first, and refuses to talk about his fears. Instead, Barry takes out his frustrations on Wally West aka Kid Flash. Wally is being trained by Barry, and is eager to become a hero in his own right. This eagerness leads to conflict between Barry and Wally as Barry does not believe that Kid Flash is ready to be a proper Speedster.  Barry’s bad attitude are caused in large part by his knowledge of Iris’ future; her murder by the evil speed god Savitar.

Iris’ death, as explained by Jay Garrick in episode 9, isn’t set in stone and is just one possible future out of many. Yet, Barry can’t shake the feeling of her impending doom. After witnessing events suggesting that Iris is headed to certain a death, Barry finally tells her what he saw in the future. Iris is distraught of course, and actress Candice Patton does a great job expressing the character’s distress.

The rest of the episode is spent informing Team Flash of Iris’ future and convincing them that they need to change it. Barry and Cisco visit the future using Cisco’s vibe powers to gather information that’ll help them augment the time line. Iris, in the mean time, is still coping with the knowledge that she could die and is determined to change her fate. Wally West ends up using his speedster skills to change a facet of the future, proving that it isn’t as rigid as they thought. Optimistic of this small victory, the team is more determined than ever to protect Iris at all costs. It seems that they are willing to deal with the repercussion of playing with time out of love for their friend. Folks, we might have another Flashpoint on our hands.

Episode 10 was an improvement from the mid-season finale. I’m happy that the focus will be on Iris the rest of the season as her time in the spotlight has been limited. On that note, I’d like to say that if Iris is going to be the focal point, then she needs to be more active in her own narrative. It’s all fine and dandy that her and Barry are finally together, but there should be more to her than needing saving and her love life. Let’s have her use her investigative skills more openly. Let’s have her making more decisions that impact the team and Barry’s life. Let’s have real life scenes between her and Barry, you know, like relationship moments that are more than her being his 24-hour cheerleader. Candice Patton has the acting chops to bring more to this character, so I’m begging the Flash writers to let her come into her own. Oh, and please don’t murder her. She has so much potential. That’s all I have to say about this episode. See you next time.

Tune into The Flash on Tuesdays at 8PM on the CW.