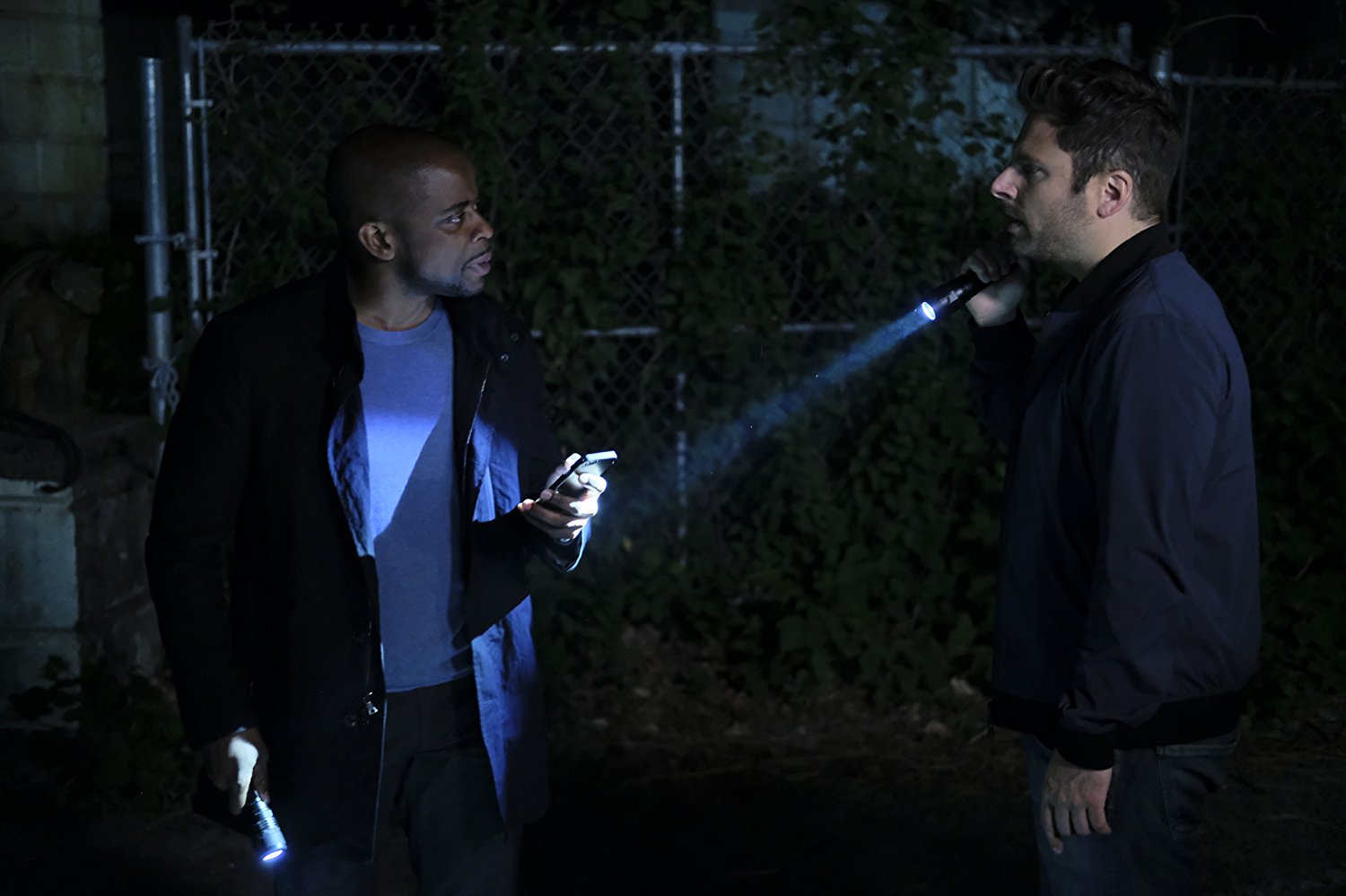 Psych: The Movie comes three years after the television show ended in 2014. Though it may not seen that long ago, for Psych fans such as myself, it has felt like an eternity. Our hope for a special finale episode was rewarded when it was announced that we would be gifted with a Christmas special, directed and written by the show’s creator Steve Franks and co-written by star James Roday.

For those who may not know, Psych centered around the shenanigans and tomfoolery of fake psychic Shawn Spencer (Roday), and his best friend Burton ‘Gus’ Guster played by Dulé Hill. Each episode Shawn and Gus drove around San Francisco in Gus’s little blue car, affectionately nick-named “The Blueberry”, as they solved various crimes and mysteries, much to the chagrin of the local police force.

From the opening sequence of Psych: The Movie, I knew this property hadn’t lost its sense of ridiculous and absurd situational comedy, and I felt like I was in TV heaven. The movie picks up three years after the show ended, and Sean is on a personal mission to find his fiancé Juliet’s (Maggie Lawson) engagement ring, which was stolen from them in the finale just as Shawn proposed. While Shawn is occupied with his search and setting up their new office, Gus, now sporting a sexy beard (hey boo), is back at work in the pharmaceutical industry, after only making it eleven days away from the corporate world.

When Juliet’s partner is attacked, Shawn and Gus decide that they must help, and eventually end up pulling Chief Karen Vick (Kirsten Nelson) into their hijinks. Karen is excited for the humorous confusion that Shawn and Gus bring to the table, because she had missed being in on the action. As Shawn and Gus follow clues, they stumble upon a nefarious plan hatched by bad guy Thin White Duke (Hey Gus and Shawn called him that not me), played to British dandy perfection by Zachary Levi.

As the team gets closer to solving the mystery, we’re treated to the familiar snappy and fast paced dialogue filled with hilarious pop-culture references (the line about Get Out slayed me). While there are many moments where I laughed till tears formed in my eyes, there were other subtle, emotional moments that not only gave me a sense of nostalgia, but warmed my heart. One of these took place when Juliet reaches out to her mentor and former partner Carlton ‘Lassie’ Lassiter (Timothy Omundson). Juliet begins to doubt herself due to the investigation, and needs reassurance from someone who understands. As Juliet became emotional so did I.

Due to clues given in a hilarious dream sequence, Shawn is able to figure out who the mastermind is behind everything that’s been happening, and eventually the team confronts their nemesis. After a long night, Shawn tells Juliet that he doesn’t want to wait, he’s ready to get married. Providentially, local jewelry fence El Proveedor (Robert LaSardo) walks up and tells Shawn that everything he said would happen from his tarot card reading actually happened. As his way of thanking Shawn, El Proveedor offers to officiate the wedding. The movie closes in what I consider to be a perfect ending, with the wedding of Shawn and Juliet on a pier surrounded by their friends and family, surrounded by crime scene tape with a bunch of strangers looking on.

One of the things that made me fall in love with Psych was the unabashed nerdiness and awkwardness of not only Shawn and Gus, but everyone they met. Each character had their own little quirks that added to be beauty of the show, and the movie is no exception. Psych: The Movie gave me everything I needed and more than I hoped for. The relationship between Gus and Shawn remains the same, one filled with affectionate insults, mutual expressions of exasperation (“come on son!” will always be a classic) and, above all, love and snacks.

Psych: The Movie is available for streaming on USAnetwork.com