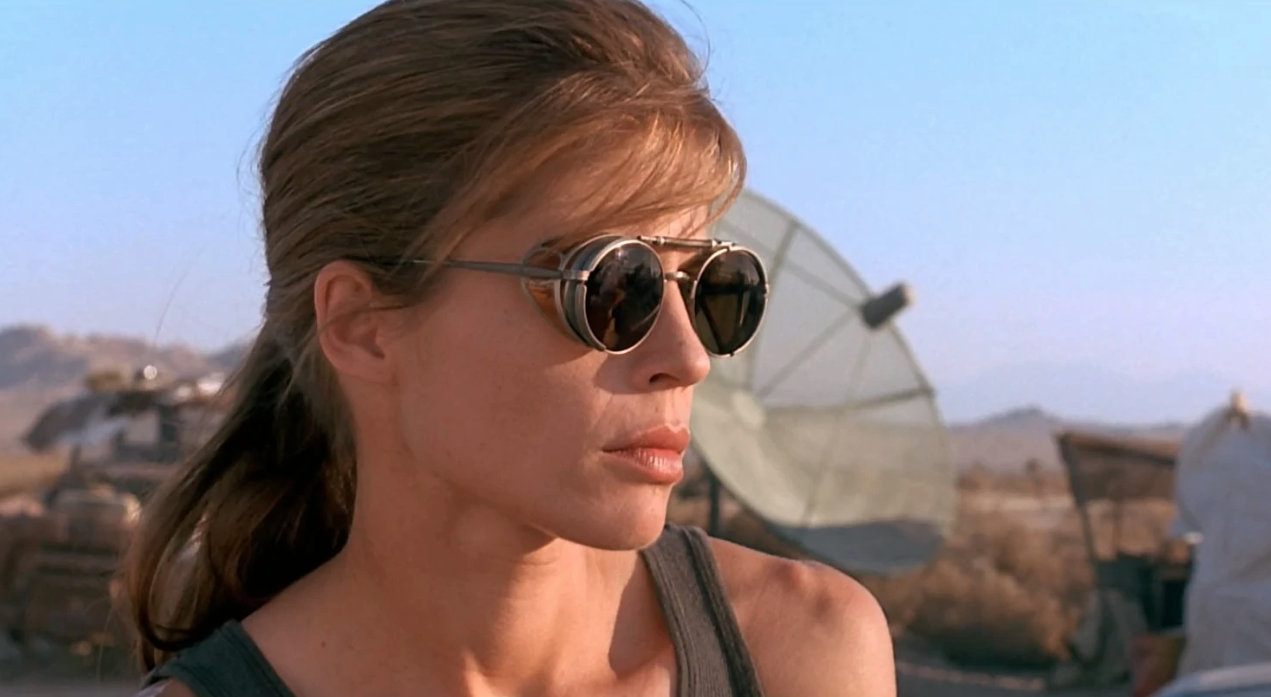 It’s amazing to watch an action hero’s journey across multiple films, track where they are, and compare that to where they were. It’s even more enthralling when that action hero is allowed to have very real flaws and setbacks that give them more than just the big bad of the story to fight against.

In Terminator 2: Judgment Day, Sarah Connor is dealing with PTSD from the events of the first film while also doing everything within her power to keep her son John alive so that he can be the leader of the resistance as an adult. Within this sci-fi narrative, we the audience get to see a realistic portrayal of what intense trauma can do to a person. In honor of PTSD Awareness Month, let’s dive into Sarah’s mental journey in the second film of the franchise.

As a quick refresher, Sarah was a normal young adult in the original movie who lived with a roommate and worked at a diner to make ends meet while studying at a junior college. This relatively peaceful existence comes to a screeching halt on May 12, 1984, when she finds herself being pursued by a dangerous machine called the T-800. Thankfully she’s saved by a man named Kyle Reese. Kyle was sent back in time by her son John to protect Sarah from the T-800.

Throughout the movie, Sarah is put through the wringer as her world is turned upside down. Between being pursued by a killer robot, losing multiple loved ones, and finding out that she’s the future mother of humanity’s last hope for salvation, it’s no wonder that she’s left with some mental scars by the time we see her in T2.

After realizing that she’s pregnant with John, Sarah goes into hiding to protect herself and her baby. She gives birth to John on February 28, 1985, and out of concern for their safety she adopts a fugitive lifestyle for the two of them. This keeps her mind and body in the fight or flight mindset that it was in during the first movie, on top of the fact that she hadn’t had the chance to work through those emotions. She had a child to look after, a savior to train, and severe trauma and paranoia to contend with.

Things came to a head when Sarah tried to blow up the offices of a computer corporation in LA. This led to her being institutionalized and labeled as criminally insane while John became a ward of the state and put into foster care. Now that we have the backstory of how Sarah developed her PTSD, now let’s dive into the depiction we see in Terminator 2 and why it speaks to the truth of the disorder.

Due to the violent and heightened circumstances of Sarah’s trauma, her symptoms are more akin to the PTSD experienced by veterans of war. It’s not a 1-to-1 comparison, of course, but it’s a familiar baseline to hold up her experiences to. Sarah’s more prominent symptoms of PTSD are reliving the event through flashbacks and nightmares along with the feeling of being jittery or nervous. She also displays signs of depression, but those are more subdued and hard to pinpoint on a first-time viewing due to her hardened demeanor.

As far as reliving the events, we can see this displayed multiple times in the film, starting with Sarah’s dream sequence between herself and Kyle Reese. They developed a relationship over the course of the first movie, and it’s understandable that in times of distress she’d want to return to someone who gave her comfort, protection, and strength.

We also see her reliving the events in a more visceral way the first time she sees the T-800 in this movie. Her instinctual reaction is to scream and run in the opposite direction. Granted this is a large and intimidating figure with a weapon, but her panic is more towards the T-800 itself and its presence around her and John.

In one of the enduring and startling scenes in the movie, Sarah has a vivid nightmare about the end of the world, specifically taking place at a playground with children. This speaks to her anxieties as a mother and wanting to protect John, not just as the future savior and leader of the resistance, but as the son of a mother who feels the strong instinct to protect her child.

The most prominent symptoms Sarah displays are paranoia and hypervigilance. She feels the need to be overly prepared and overly proactive in stopping Skynet to the point where she makes a plan to murder a Skynet engineer and is willing to do so in front of his family. It’s not until John finds Sarah and convinces her not to do it that she pulls back on the plan.

People exposed to extreme violence may respond to that trauma with their own violent behavior as protection and coping mechanism. Sarah isn’t necessarily wrong in seeing Skynet as a threat, but the way she approached the situation wasn’t the best and it went towards doing to others what had been done to her.

Sarah Connor is one of the most inspiring and intimidating women in cinema, and Linda Hamilton’s performance goes a long way in making that come across. She’s tough as nails, invested in her son’s life and livelihood, and is willing to make hard decisions for the safety of humanity. All admirable traits. But she’s also human, flawed, and emotional — things that people can relate to. These kinds of action hero stories are normally reserved for male characters, but Sarah Connor is written with love and reverence that captures audiences.