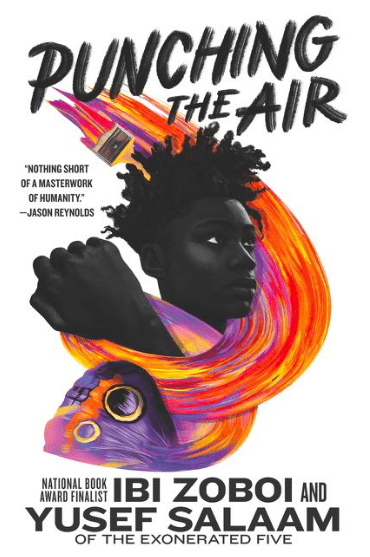 In recent years, the 1989 story of the Exonerated Five has been introduced to a new generation of people who either weren’t born yet or were too young at the time to process the event and fallout. Many of us are familiar with Netflix’s critically acclaimed When They See Us, the mini-series that follows the experiences of the five young boys who were wrongfully convicted for a crime they did not commit.

Punching The Air is a YA novel inspired by Dr. Yusef Salaam’s experience as one of the Exonerated Five, and co-authored by Ibi Zoboi (Pride). Punching The Air follows Amal, a young Muslim-American teenager who is on trial and ultimately sent to prison for a crime that he did not commit. Though there are obvious similarities, such as the shared religion and misfortune of being convicted of a crime he didn’t do, this is the fictional story of Amal — not Yusef.

The story is an artistic reimagining of Salaam’s experiences, updated to reflect the current times. Unfortunately, other than the references of Silly Bands, Ellen, and cell phones, the story is one we all know too well, a story that is all too common in Black and Brown communities in America. In the 31 years since the events in Central Park and the fallout that followed, the real circumstances that the Exonerated Five went through still feels authentic when applied to the story of Amal. Punching The Air highlights how far we have yet to go in the reform of the criminal justice system.

The tragedy of this tale is that Amal’s story is the story of so many youths in the system. Amal is not a ne’er-do-well nor is he a saint, but in this story it didn’t matter. Amal could be someone you know. Amal personifies all that is wrong with the prison industrial complex and our nation’s version of justice. As we follow Amal, we share in his concern for not only himself, but his family as well.

We are informed of the meaning of Amal’s name early on: hope. And that’s what you feel the entire time reading the book. You are hopeful that this story will end better than we know Yusef’s did. You hope that he can overcome this. You hope that he won’t lose his hope.

The story is written in the first person, so as I’m reading it, it makes me feel that Amal is confiding in me personally. You know the type of late-night conversation you have in the car outside of someone’s house hours after you were supposed to drop them off? That’s how I felt reading Punching The Air. We get to see some of the most intimate and abstract thoughts of this process.

We get to know Amal little by little from small but significant vignettes. These moments would be banal if not for them defining how a young Black child with a less-than-affluent upbringing is received. The moments remain shadows on him, mini-transgressions that add up to a “pattern of behavior.”

This story is poignant in its telling. Written in verse, Zoboi and Salaam deftly convey the range of emotions that is felt when experiencing a trauma. I am a fan of poetic language, so I thoroughly enjoyed the book. Punching The Air is powerful in its delivery. The wordplay, the symbolism, the double entendres gave weight to every page without making the subject matter too burdensome.

Although the book is intended for YA, don’t be deterred from reading if you are more “A” than “Y.” It is an enjoyable read. But don’t take Punching The Air to be a light read. The authors convey deep emotional context and nuanced concepts in a few words (which is such a skill). There were several passages where I would take a beat to really absorb what the authors were saying.

Punching The Air is an interesting read for a young adult. The lessons are easily received, yet aren’t preachy. The adult audience reading this will have a better understanding of the deeper concepts. I would recommend that this book be read as a family. It would be a great tool for any parent to introduce the criminal justice system to their children. I wish that we as the Black community didn’t have to give our youth a different education on how laws work than that is taught in the classroom. The story is clear, but the message is what resonates. The book includes parallels between slavery and the prison system from the obvious ones like shackles to the less obvious ones.

As an adult reading this book, I watched as the innocence and childhood is stripped away so swiftly and completely from this young man. The book provides good topics of discussion about the ramifications of going to jail beyond the imprisonment aspect, like the bail system, the effects on the family, the psychological and emotional toll that comes with it. It even discusses how justice isn’t always blind, nor is it always just.