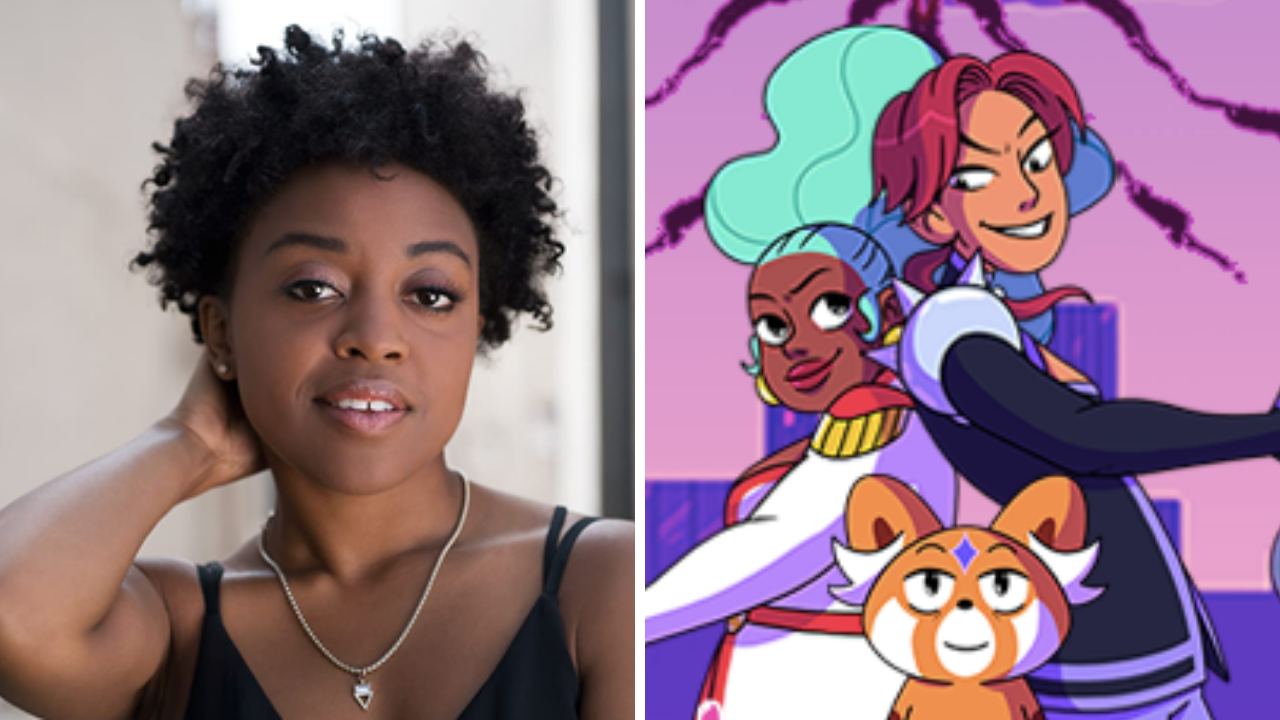 The show follows two nontraditional heroes, roommates Alex and Daisy, who’re looking for direction in their lives, as the fate of the universe falls into their hands.

With their magical friend, Nut, an adorable red panda who gives the girls the ability to transform, the girls are able to go from ordinary to extraordinary.

Part of the late-night programming block on TZGZ, the series premiered on September 26, 2020, with six 15-minute episodes in its first season.

The show is anime-inspired with undeniable Sailor Moon-like qualities that will have viewers ready to fight evil all night long. With animation that is fun and vivid and will make any nerd fall instantly in love, Magical Girl Friendship Squad is must for all.

BGN was honored to interview Brunson, who voices Alex, the roommate with a mother-like charm and a tendency not to take many risks — well, that is until she’s tasked with saving the Universe.

Brunson is known for her iconic Buzzfeed video content, has self-produced a series called Girl Who Has Never Been on a Nice Date, and has starred in the HBO sketch comedy series A Black Lady Sketch Show since 2019.

As a talented actor, producer, and writer, Quinta has taken the world by storm and continues to make audiences smile with her comedy and authenticity.

BGN asked Quinta about her experience with Magical Girl Friendship Squad, and we were not disappointed.

What is your favorite part of playing Alex?

I just think she’s adorable and cute and I love her blue hair, or seafoam green as people have been telling me. I love her jacket. People say she wears a little bubble jacket that I just think is so cute and so me, and it’s silly going to school when it’s too cold.

I just enjoy being her. It’s such a pleasure when I get to see an episode and hear my voice on that character. I just love her.

Do you have a favorite episode?

I think the pilot is incredible. I don’t think it’s probably everyone else’s favorite episode, but I think Kelsey, the writer, did an excellent job of setting up who these girls are, what their life is, and what the show is going to look like.

I think that those are the signs of an excellent pilot just from a writing standpoint. It also leaves you wanting more at the end, and I think that’s what makes it really great to me.

What do you think the biggest takeaways from the show are?

The showdoes a good job on covering our current work structures for a lot of us millennials who have gone into the journalism and media working fields in a way that I have not seen before and in a way that you can only really do with animation, you know, like actually symbolize the evil that can be behind some of these corporations at times.

I think that is something only an animated show can do and, in the same breath, have the audience have fun with that narrative, you know what I mean? So, I think if anything, it’ll have us examining our work structures a little bit more than we have in the past, or at the very least, which is good enough laughing at it, which is what we want people to be able to do with the comedy.

Within the voice acting experience, did you ever find that there were any difficulties or was it ever awkward with translating your voice to the animation?

Yeah, with any voice animation, I do try to change my voice a little bit. I’ve done a couple of voice animated projects now, so I try to go one step away from my voice. It’s really just about maintaining that voice throughout the entire project. So, you may have your voice down when you’re recording one episode, but then you go away for three days and you come back and you’re like, wait, what was my voice again?

So, you have to go listen to old tracks and try to make sure that you match that sound. That’s always something that’s unique about doing voice acting — having muscle memory within your vocal group to try to make sure you have that voice down and you’re able to whip it out at any time.

What do you think of the animation style and the art of the show?

I just love it. So fun and so gorgeous. Just a spectacle all the way around. The colors are nice and bright. The characters are pleasing to the eyes. I think that was the first thing I noticed when I saw the pilot for the first time. I was just like, This is so visually pleasing and easy to watch. I think that can bring anyone in to watch.

Sometimes there are some animated shows, for instance, Bob Bergers — which I love, it is one of my favorite shows in the world — but when the show first came out, I had a hard time getting into it. The animation was not pleasing to me. So, it took a while for me to actually get into the show. It wound up becoming my favorite. But I think the art style for this show is so pleasing and welcoming to whoever would like to watch.

Other than Alex, do you have a favorite character?

It’s Corvin, the character Mateo Lane plays. He is the bad guy henchman. I just think Meteo is so hilarious, and he really brings that to this character.

So I think that’s my favorite character besides Alex, but I should say Nut. Nut is adorable and, again, Anika is incredible. I can’t believe I got to work on something with her. That’s going to be everyone’s favorite.

Do you have a message for audiences?

I think it’s important that people know they will be able to watch it on streaming platforms, because I’ve been asked that question a lot already, so I’m not sure each and every single one of them. But you will be able to stream the show. You won’t have to catch it at midnight because it’s not 1999 anymore, everything goes on streaming.

The first two episodes are currently available on YouTube (E:1 until 10/10, E:2 until 102). They are also available to stream on SYFY.com and the SYFY app.