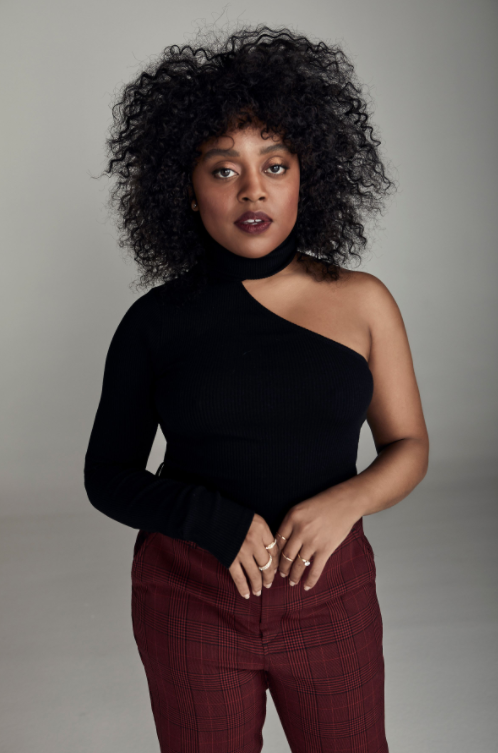 It’s never been a secret: Quinta Brunson has become notorious for breaking the internet in the best ways possible.

From her Instagram series, Girl Who Has Never Been on a Nice Date, to her iconic Buzzfeed content and eventual roles on HBO, Netflix, Adult Swim, and more, Brunson has illustrated that she is the true royalty across platforms.

She is an actor, producer, stand-up comedian, writer, and yes, a very proud Black girl nerd.

One of the many noteworthy parts of her career journey has been the thousands of viral memes of her. So, it’s quite fitting that her new book is called She Memes Well.

Through this humorous collection of essays, Brunson shows readers her relationship with the World Wide Web, childhood moments, whimsical adventures, and struggles with depression.

BGN was able to catch up with Brunson about She Memes Well and discuss what inspired her to write it and some of the key things she wants audiences to know about the essays.

Inspiration for She Memes Well

Brunson shared that she wanted to create something that speaks to a very specific stage of the digital era that proved to be pivotal for both herself and others.

“The inspiration came from just wanting to kind of have a record of the digital age and a come-up during the digital age that came post YouTube. It was more like the Instagram era and Instagram video era and Vine, etc. It was what my experience was becoming a creator during that time because I hadn’t really seen it recorded anywhere yet. You know, what people have been coming up in and they’ve been going into traditional media or just excelling in the digital sphere,” Brunson explained.

She continued, “But I hadn’t seen it quite recorded yet. I think another thing that became inspirational to me was there were books from people like Mindy Kaling and Tina Fey that encouraged me to go into the field that I went into with comedy and writing and in television production. I just thought I wanted to be a part of that maybe for another young girl, especially a young Black girl, like being able to be maybe one of the books on their shelves that encourages them to pursue this career.”

Brunson’s Example of Self-confidence for Black Women and Girls

For years, Brunson has been a role-model for so many Black girls and women with her unapologetic talent and hilarious bravado.

Her book also chronicles some of the defining moments in Brunson’s childhood. From being a very energetic kid, which she says is an understatement, to a talented dancer, Marvel nerd, gamer, and more, Brunson always aspired to do something big with her life.

Exploring the Power of Memes

It truly did work out for Brunson as she continues to raise the bar with her work. She Memes Well reminds fans of the power of memes and how they shape and influence the way people consume media and communicate.

Brunson explains that memes are so influential. “I talk about the power of images in the book. They translate across language barriers. One of my favorite things in learning about silent films was that one of the reasons silent films became such a phenomenon was because you didn’t need to know English in order to watch them. You could understand from the character’s faces, from the stories being told without words, what was being said.”

She added, “I think it was something even that I used to think about with BuzzFeed videos. The videos when I worked at BuzzFeed were super simple for a reason so that someone in another country could understand the video without understanding English. So, I think memes have that power. They have that sharing power of just an image where we can all clearly see what the image means. Sure, we add our own words over them and whatnot, but an image like a gif or something like that, we understand the emotion is people, no matter where you’re from.

“The power of a meme is sharing this little blip in time or blip in a story to express emotion and to express our thoughts. I think it’s so significant. I talk a lot in the book about how memes are the digital evolution of language. It just keeps evolving in so many different ways, from hieroglyphics to memes.”

Challenges of Writing She Memes Well

Brunson also opened up about some of the obstacles she encountered during the process of trying to grace us with such a meme-ingful book.

“The hardest part was that my life kept changing as I was writing it,” she said. “I don’t think that’s unique to me. I feel like this probably happened with a lot of people who have written a book. You know, when I started writing the book, I was still working at BuzzFeed. I was still working from nine to five. Since then, my life has changed so much. So, you’re trying to create a body of work to give to people to read, and you hope that you have a succinct theme, right?

“So much of my life experience happened in the past three years from when I started writing the book three or four years ago. Some of my ideologies had changed, some of my political thoughts had changed. So, it often involved going back in the book and making sure that I was on the same page, so to speak, as I was in the beginning of the book, and if I wasn’t, to capture that change throughout the book so that it was understandable for someone to read.”

There was a wealth of thought and precision poured into Brunson’s voice on each page.

“I think that goes into just how long it took to write. There were some months when I had to work and I couldn’t focus as much on the book, and so it became a very long process. I think the last hardest part about writing a book is when you don’t realize things that you as an adult have turned into one sentence, books ask you to turn them into a paragraph and then turn those paragraphs into a chapter.”

From reading how Brunson nerded out over Marvel, Mario Party, and so many deliciously amazing fandoms throughout the book, BGN was dying to know if she identifies as a Black girl nerd, and the verdict is in.

“Oh, absolutely. So much so that I try to minimize my Marvel talk in the book, I’m like, now, do not use this whole book to talk about Marvel. Like, don’t do it. I tried to bring myself back from making a whole chapter about Marvel even. So absolutely. That’s what I am.”

She Memes Well will be available on June 15, 2021, for purchase on Kindle and hardcover. Pre-orders are currently available through select retailers.