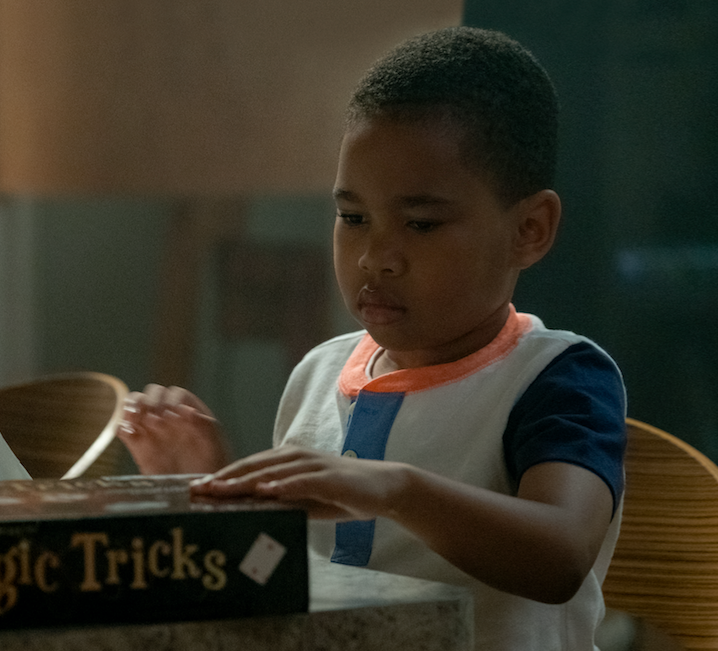 In this week’s recap of Raising Dion, we review episode 4 also known as issue #104: “Welcome to BIONA”.

Baby, we have left Atlanta for Clark County, Alabama. The rooster wakes you up before your alarm does and farm animals are heard throughout the house of Brayden and his dad. As they prepare to harvest, we find out that Brayden’s dad has a superpower to revive a dug-up rosebush and have it blooming in seconds.

Back in Hotlanta, we have Nicole and Pat analyzing the picture of the weird lightning-shaped man. Kat comes through to tell Dion that she can’t make it to his birthday party and undermines parenting by gifting him an iPad. When Nicole and Kat are alone, we find out that their parents cut off Nicole due to dropping out of pre-med but Kat reminds her that she supported Nicole as a dancer *shrugs*. Kat claims that she is always there for Nicole and is there to kick her when she needs it. Sister hug and love.

On the drive to school with Pat and Dion, we get a breakdown on ions and nature which is possibly what causes Dion’s power. Nicole comes up with the bright idea of asking Malik to find who posted the video of the lightning creature in the video Charlotte sent and offers him dance lessons in exchange because he clearly needs it. At BIONA where Mark used to work and Pat still works, Pat gives Dion a tour. Didn’t we just see black vans outside the office? Not the best place to have a kid with powers. Suzanne Wu, Mark’s boss, walks in on the tour and accompanies them.

Nicole struggles through five job interviews before calling Pat who gives her great pep talk into walking inside her old dance company to request a job. While there are no teaching jobs available, Nicole lands in the ticket sales. A small reunion with old dance friends gives me warm fuzzy feelings.

Back in ‘Bama, we see a black van parked on the farmland. With faithful Delilah in hand, Brayden’s dad makes it clear he is not one to mess with but there is no inside except a few people getting high. Suzanne’s tour comes to an end with an awkward exchange from Pat accompanied by a creepy man named Lars. Leering Lars is a problem, I just know it. Inside a safe that is closing Dion claims that he saw a reindeer and uses all his powers to get in. Boy takes down the lab communications and brings Suzanne’s keycard to Pat. I don’t know why Pat listens to Dion’s idea of not getting caught but he lets them both into the lab. Inside the lab, there are various animals as well as monitors that are following people around the world. Including one Walter Mills in Clark County, Alabama. The animals are from Iceland and are being experimented on. Where is PETA when we need them?!

Dion showcases a healing power to a sick white fox. He is sweet but I’m praying no cameras caught that. Malik comes through for Nicole! The young woman gives Nicole a theory of how the people inside the storm where being abducted but one of them is trying to break free but loses us on David Bowie being the lightening man. Just as we are about to leave her crazy butt, she brings up Iceland. This lightening man has been seen around the globe.

Pat and Dion nearly get caught because Pat had to fiddle around with the labs on the computer. Dion shuts down the power to get them out and steals a critter in the process. Whose bright idea was this? As we safely get out of BIONA, we find out that the city’s power was shut down. Back at the apartments Pat and Nicole discuss what they both found out, not discussing the obvious probability that BIONA are the bad guys! Nope, the focus is on the stolen hermit crab and Pat not losing his job. Sighs.

At BIONA, we find out there was a backup generator that kicked in which means that they will find out about Dion. Our little baby isn’t safe once Suzanne views the videos. Dion gives Nicole a treat with magical floating colors and a dance party on the bed. But we can’t stay warm and fuzzy because back in Bama, Walter Mills wakes up to find Brayden missing from his bedroom. He’s outside watching a storm rolling quickly in about to attack.  Walter saves Brayden by shutting him inside the house but poor Brayden watches from a window as his dad is attacked by lightning.

Currently, I really do not trust BIONA at all. What do they actually do with all those animals? I’m also curious as to why Suzanne has such disdain for Pat. Maybe it’s because he spends work hours playing games with kids. Now, Kat overstepped her boundaries as an aunt and sister by giving Dion an iPad but it was nice to see her show support for her little sister. As a big sis, I do tend to overstep and go into mom mode for my siblings but they know that I support them with everything that I do. Kat is just me, only 10 times more.

To get a chance to see other people like Dion, Mark, and Charlotte is cool. There has to be a connection between all of them. Walter and Brayden are the opposite of Nicole and Dion but just as cute. You get pulled in by their cuteness only to be heartbroken by the end of the episode.

Stay tuned for Episode 5: ISSUE #105 Days of Mark’s Future Past