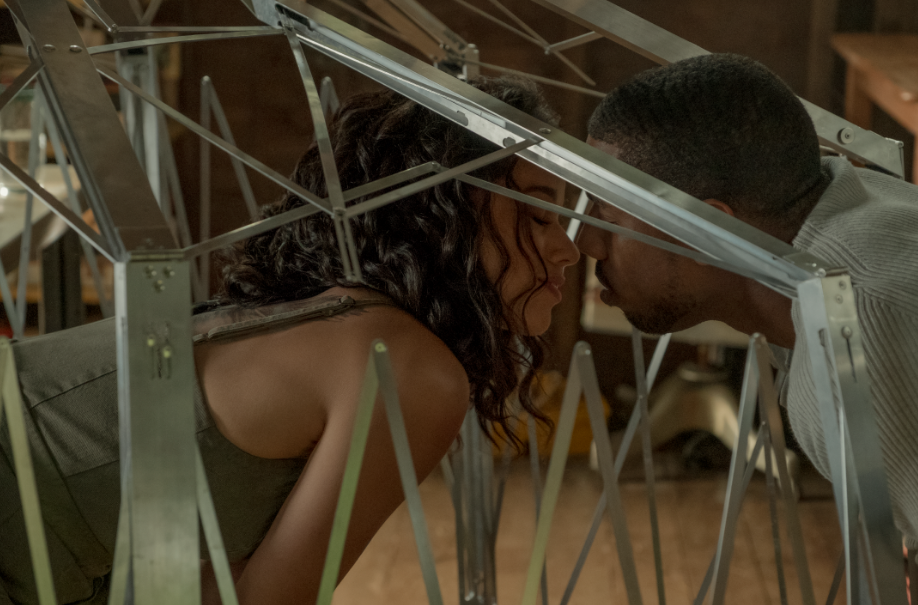 In this week’s recap of Raising Dion, we review episode 5 also known as issue #105 Days of Mark’s Future Past

X-Men references already? Get ready for time jumps. Back in Iceland 2010, when I was enjoying the FIFA World Cup in South Africa, Mark was getting his powers. I should’ve gone to Iceland.  Pat somehow finds a girl who is friends with the missing woman, Jill, from the second episode. Remember she has a cabin near the same lake Dion and Nicole were. No wonder Mark was telling them to leave.

Back to Iceland, Mark springs the fact that he and Nicole got married on a whim after a few months. Mark gushes about his love for Nicole while Pat expresses his lack of love for Nicole. Mark heads out to see the lights as Pat stays inside the yurt to monitor the data for when a comet passes. As Mark checks the equipment outside, he bumps into farmer Walter Mills and sends a video to Nicole. We get a glimpse of the comets and Charlotte. Pat tries to reach out to Mark as the data shows radiation fluctuating but Mark can’t hear him or notice the comets sprinkling a few elements on the ground he is standing on.

In present day, Dion is attempting to sneak a snack into his room but gets caught. It is Dion’s birthday and not everyone from school is coming but luckily nerdy Pat with his Stranger Things ringtone should be coming through. Maybe, considering Suzanne doesn’t look happy and he doesn’t answer the phone when Nicole needs him to watch Dion because she got called into work or will get fired. Pat is dealing with footage of him and Dion by the lab moments before the power goes out. Lies awkwardly spew out of his mouth as he gets himself out of Suzanne’s office fast.

Fox Theater in 2011 features Nicole walking on stage to perform as Mark watches from the audience. At this point, I can see Michael B. Jordan as a loving husband sometime soon. Backstage, Nicole announces to Mark that she is quitting because she is pregnant. Cue happy and loving husband moment that most people dream of. Mark wants to be there the whole time to watch his child grow up. Tears are forming in my eyes. Mark is the perfect package.

Presently, Nicole is late for the party, Dion is catching up with old friends and leaving out Esperanza. Four years ago, Mark experiences some issues as he drives Dion around. His hand goes through the steering wheel. Mark digs deep into research nearly missing out on Dion’s birthday party but an argument over the phone has Mark suddenly appearing at the party in an instant. Saving his butt. At the current party, Nicole makes it in time to cut the cake but Dion is embarrassed by the cake, Esperanza, and not fitting in with his old friends or the kids at school. Esperanza tries talking to Dion but he has an asthma attack, making his inhaler fly out to him. Leading to a conversation between Dion and Esperanza about his secret powers. Suzanne happens to be at the party and closely watching Dion. Not good.

Time hop to New Orleans 2017 where Mark is secretly stalking Charlotte. As they are discussing how to control their powers a storm appears. A man-made of lightning appears in front of them right after Charlotte showcases her powers. He strikes her with multiple bolts and she lands in the river. Mark pulls her out of the water but ends up being pulled up by a bolt wrapped around his body. The hand of the lightening man extinguishes Mark right in front of Charlotte.

A storm in the present brings Mark to Dion’s bedroom, trying to touch his son but he disappears right before Dion wakes up. Lightening man is seen by Dion followed by Mark reaching out to Nicole as he is being pulled back.

If you have ever seen Days of Future Past, you knew that we were going to do quite a bit of time jumps but at least we have Mark at the focus of it all. We get to see how it all began for him and Nicole, as well as a lot of dead people. What was supposed to be an amazing trip, became the end of him in the worst way. I’m just glad that I could see him as a loving husband and father. It mustn’t have been easy to keep everything from his family.

Dion and Nicole are having the worst day ever for what is the best day of the year. It is tough being the new kid after a move and trying to keep in touch with your old friends. I’ve experienced so many moves before I was ten and I’ll admit that I couldn’t keep up with my friends but mostly because it was the 90s. Dion is experiencing a lot of changes and nothing is going his way. I feel for the kid. Esperanza is really a great friend even when Dion isn’t. Suzanne is creeping me out.