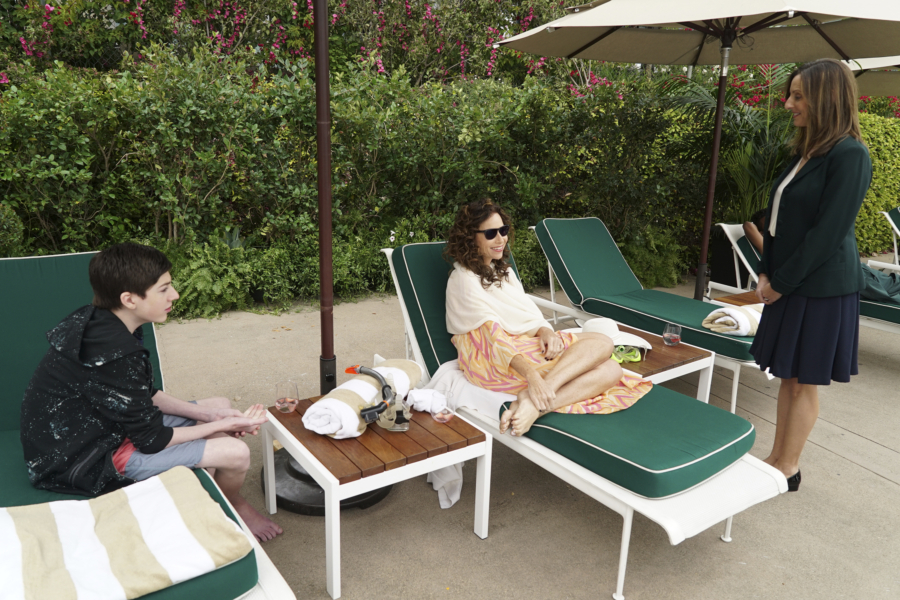 Relationship Problems at The Club

Relationship problems within the DiMeo family were bound to happen, since this T.V family is so realistic. I don’t mean the regular brother-sister stuff that Dylan and Ray get into, nor do I mean the brother stuff between Jimmy and Uncle Billy. Last week touched on the relationship between Jimmy and Maya, but this week touched on the deeper emotions between J.J and Kenneth and Maya and Ray.

J.J and Kenneth started the episode, thick as thieves. They had special handshakes for all of J.J’s friends, which I thought was super sweet. Even Ray had one, although everyone thought he couldn’t remember it because he has no cool points. But, alas, he was so close, but then, of course, Dylan had to push him aside. She even comments on why she puts down Ray to feel better about herself. She really doesn’t care. Comedy, but still normal brother-sister stuff.

It is when J.J and his new hockey team friends decide to go to the movies. J.J says he’s going without asking Kenneth if he is free. Kenneth has a life too. This is when the two butt heads. I think this argument is so spot on. Sure, Kenneth is J.J’s aid, but they are friends too. Where does the balance between friend and employer lie? Kenneth had a right to get mad a J.J for not asking, especially since Kenneth did have a date for that night already planned.

To prove to Kenneth and himself that he doesn’t need an aid, J.J gets a computer talking board that comes with sitcom sound bits. There is nothing like human contact and this is what Speechless portrays with the difference between Kenneth and the computer board. J.J likes the human connection and he likes Kenneth, which was apparent the first time the two met. They get each other and they have their own inside jokes and handshakes. A computer board can’t give that to J.J. In the end, thanks to meddling from Dylan, J.J apologizes to Kenneth and the two make up. It was very touching.

Ray and Maya started the episode shopping for winter clothes in the girl section of a department store. Ray feeling humiliated as always, expressed his feelings about being dragged to everyone else’s activities, while they do nothing that he wants to do. At first, he sounds like a winey middle child, but then Maya agrees and would love to find something the two of them could do together. Since Ray doesn’t approve of her antics, finding something the two of them could do together would be heaven for Maya.

They entire family sneaks into a private country club. Ray criticizes the family for their actions and worries they will get caught. His attitude turns around when he is catered to all day by the staff of the country club. But it is the quality time has Maya in love with the place. She and Ray had afternoon tea together, which she loves, they went shopping for men’s apparel, and they had plans to play in the mother-son tennis tournament. Of course, Jimmy, the level headed one of the family, tries to tell Ray the difference between why Maya was enjoying the country club and why Ray was enjoying the country club.

This was a shining moment for Speechless. Mother-son relationships are tricky to portray. J.J and Maya have it easy, because Maya seems to cater to J.J’s wants and needs, even though they too have had their ups and downs. But, when Maya tries to cater to Ray, he turns his back on her, not realizing the importance until it’s too late. When he plays tennis with his friend’s mom after lying to Maya about his whereabouts, it is truly heartbreaking when Maya finds out.

Again, Jimmy gives Ray some sage advice in a manner only Jimmy DiMeo can give. In the end, Ray apologizes, realizing his faults, while preparing afternoon tea in the backyard for him and his mom. He even made her a fascinator for the occasion. Again, very touching.

This episode had some depth to it. It was overall a great episode with emotional ups and downs. The real representation of authentic relationships is what makes me coming back every week for more. Catch an all new episode of Speechless on Wednesdays, only on ABC.