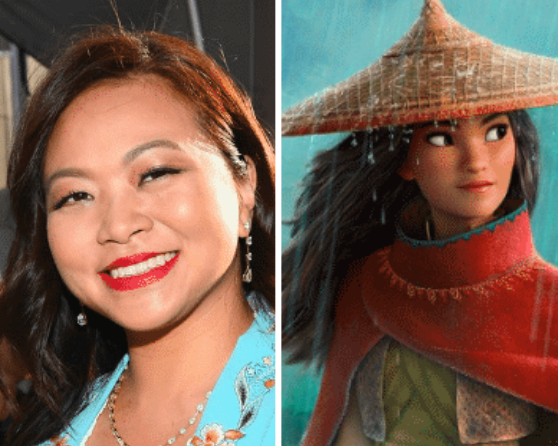 Disney’s upcoming release Raya and the Last Dragon aims to answer a question most people didn’t know they had. What would happen if you had a film that centered on another kickass female Asian warrior? But this time, incorporate mythical creatures that are meaningful to the culture.

Adele Lim (Crazy Rich Asians), a principal member of the film’s writing team, was eager to participate in the project after a conversation with film producer Osnat Shurer. Excited to join a new project, Lim found beauty in a strong warrior woman’s initial concept, a film that not only celebrated the physical attributes of a female lead but a character rich in culture and honor. Speaking to Black Girl Nerds, Lim discusses the origin conversation with Shurer that set her wheels into motion.

“We’d met at Disney, and when [Shurer] called me, at that point, all she could tell me was, ‘We have a young Asian female warrior who’s kicking ass,’” says Lim. “‘And, we have a dragon.’ I said, ‘I am your person for this, look no further.’”

Lim drew from her Southeast Asian roots and early exposure to Hong Kong action movies for this feature. She dove headfirst into developing a unique variety of healthy and predominately female characters. As she envisioned who these characters would be, she thought of the early images she’d seen. Growing up, she’d become accustomed to seeing names who were not only love interests or villains but talented and influential martial artists. Instead of looking at that as a deficiency, she was eager to expand on ideas she’s always known.

“I grew up with a lot of Hong Kong action movies growing up in Southeast Asia,” Lim says. “We didn’t see ourselves a lot in Hollywood movies. With those action films, the female characters were amazing, whether they were the love interest or the villain. But at the same time, they were also powerful martial artists.

But it’s not only Raya’s strength and resilience that make the story whole. At the film’s core are strong messages on the importance of friendships, particularly between women. This is a theme that isn’t central to any animated film and vastly underused in cinema as a whole. Lim goes on to explain how those relationships between women are critical on-screen and in real life.

Additionally, the strength of friendship extends to the human characters and the mythical dragon Sisu voiced by comedian Awkwafina (Breaking News in Yuba County), who was also part of the cast of Crazy Rich Asians. While dragons are typically a symbol of strength in Asian culture, in this film, the storied figure is something else entirely different.

“We don’t often see female friendship being at the center of a major Hollywood movie, particularly an action one,” Lim points out.  “And that was something that I think all of us circled early on in the beginning.

“When Raya is a little girl, she has this idea of a giant, powerful dragon who’s able to do something magical and immediately fix all the problems with the world and people. When she meets the dragon, it’s not at all what she expects. The dragon isn’t incredibly powerful. She has to protect the dragon.

“So, on the one hand, Raya feels that this dragon is not the solution she wanted. There is a deeper wisdom to her. Because of this humor, she can recognize the humanity in people. She can have faith in them even when they disappoint us, even when they betray us or let us down time and time again. She’s the one thing in Raya’s life that reminds her of her father’s dream and to have faith in her fellow man.”

The weaving of these themes paints an intriguing picture of who Raya is. As the film examines strength, mysticism, healthy friendships between women and having faith in your fellow humans paints a fascinating portrait of what to expect from Raya and the Last Dragon when it finally arrives on March 5 to Disney+. As her story unfolds with her faithful companions, she will undoubtedly take her place alongside an entire catalog of strong female leads. More importantly, instead of being the lone female voice carrying a whole film, she will have a strong tribe of sisters right next to her. Because as Lim says, that’s the “magic” that will pull people together.

Raya and the Last Dragon makes its premiere March 5th.