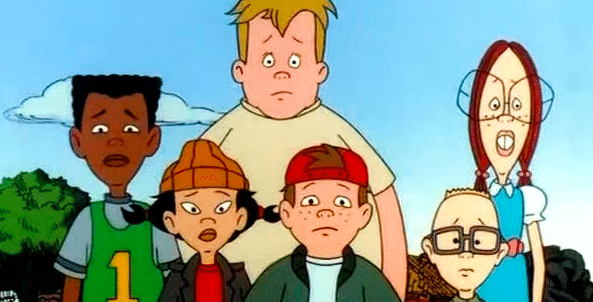 The classic 90’s Disney cartoon Recess is on the conveyor belt of nostalgic live-action reboots coming to the big screen.

According to Hypebeast, the Recess live-action lineup includes Deadly Class’ Benjamin Wadsworth as TJ, Sean Depner as Mikey, The Order’s Louriza Tronco as Spinelli, Lillian Doucet-Roche as Gretchen, Fritzy-Klevans Destine as Vince and Clive Holloway as Gus. They’ve also enlisted Sydney Scotia, Brenna Llewellyn, Kelcey Mawema and Netflix’s To All the Boys I’ve Loved Before’s Emilija Baranac as the trio behind “The Ashleys” and, of course, Adam DiMarco as playground snitch and teacher’s pet Randall.

Although this is not a studio-made Disney film and the filmmakers are currently fundraising their project to get it made — fans of the beloved animated series are not too thrilled with the idea. And it seems the nostalgia of remakes used a selling tool to create more movies is slowly beginning to wear down. The box-office is still making its millions from The Lion King which has grossed over 250 million domestically. And as long as the audience pay top dollar to see their favorite classics adapted on the big screen in live-action form, expect the reboots and remakes to keep on coming. We still have Mulan and The Little Mermaid on its way down the pipeline.

However, it’s always interesting to see what fans think about the idea of this Recess reboot going into motion:

If they do this I’m filing a lawsuit https://t.co/YwHRNnB95p

Easy boycott for me I’ll stick to the cartoon https://t.co/Z0kKcYQPmm

What are you doing https://t.co/1pfGDLe2Um

Some fans aren’t that upset about it and support the remake:

As a card-carrying member of The Ashleys, I am SO EXCITE. https://t.co/uL9FRLSEWR

I ain’t even mad at this one tbh https://t.co/aemoeHDT4f