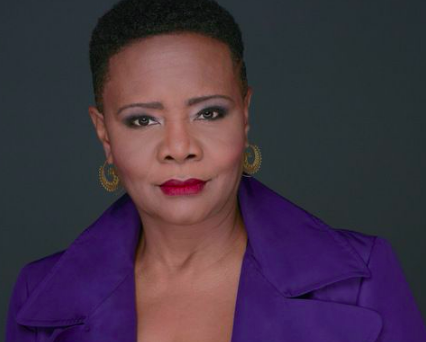 Inspired by horror films like Get Out and Midsommar and enraged by 401 years of American white supremacy culminating into the Trump administration, the clearest mode of catharsis for Tonya Pinkns was to write, direct, produce, and star as Cassandra, in a film about the 2020 election, Red Pill.  BGN had a fascinating conversation with Pinkins via zoom.

What attracted you to using the horror genre for your first feature film?

I love horror. I’m one of those people who watches two or three horror films a day. I think it is a space where you can say truth and be authentic. Because it’s a non-realistic world, you can actually say things that are true that we don’t normally say.

So this film, for you, was a form of catharsis?

Yes. I don’t even think I knew how much it was until it was done. Like, I thought, “Oh, here’s some things that I think are going to happen, and if I say them people are gonna laugh at me or treat me with contempt, the way they did when I said that he [Trump] would win in 2016, so I can just put this in a story and then ha ha ha.” And sure enough, when people read the script, they said that it was so extreme and so farfetched, it just came to pass. Like today I did an interview with NY1 [a local news TV station in NYC], and they asked me if I rewrote the ending after the election. I was like, “No.” [Laughs.]

You define the red pill as a person who infiltrates a group and destroys the group from the inside.  Which character is the red pill in your story?

I wanna ask you which character is the red pill in the story for you?

I want it to be Cassandra? But I don’t think it is.

To destroy them? It’s not Cassandra. Not for me. It’s not Cassandra, but people have different ideas. I’ll say for me as an artist, I’m more interested in people’s response to my work than telling them how they should experience my work. I feel like existentially we all experience this world in a specific and alone way. Art and music are ways to share your experience with someone else. Then the way they experience it, you get to get some of their experience, and all of it is how the divine experiences itself, in exponentially larger ways, as everybody’s reacting and responding, and the divine is having greater and greater expression. But, for a factual point, to me, who I structurally laid out the red pill to be is… [she proceeds to tell me, but you should watch the film to figure it out for yourselves].

The white supremist cult women in the town take the sacred symbol  ॐ  “Om”, which represents the self within or the soul in Jainism, Hinduism, and Buddhism, and turn the symbol on it’s side, appropriating it as their totem, “W.S.” (white supremacy). Tell me more about your take on the appropriation of this symbol in Red Pill.

Theft is what the identity of whiteness does all the time. Hitler did it with the forked cross. The writer Yuval Noah Harari talks about how “the lie” is one of the most powerful organizing forces in the world. I think that is what they [many white folks] do. They organize around these lies. Actually that symbol shift just came to me as a burst. I saw the “W” and the “S” in the image when it’s sideways. I was like, “Okay, well, here’s a lie they can organize around.” Taking a symbol from the beginning of time and using it to say, “This is the proof that we are it!” So this is me just showing them a part of themselves.

How does it feel to use a horror film to rip the Band-Aid off and reveal the raw ugliness of whiteness?

It feels really freeing and naughty. It’s also scary. One white female filmmaker friend of mine said, “You know they’re going to crucify you.” I said, “Well, I’d rather be crucified than buried.”  It’s an interesting moment in time. I did my first interview with a white person about Red Pill today and he was very tippy toey…and so, I pushed him. I think my film will mess with white people’s heads, and I delight in that. More importantly, what I always felt about this story was that most Black people were just going to know the truth of Cassandra’s experience and understand what’s going on and be laughing because they get it, while most white people will be like, “What’s going on?” because they don’t know how to know that they are the monster.

I know I’ve broken lots of rules, but hopefully, I break these rules, I’m successful, other creative people will break a whole bunch more rules, and we’ll begin to see stories that actually reflect the authenticity of how the majority of the people on the planet experience the planet. We are in a moment where this is possible, and they [some white folks] are going to keep trying to deny the reality. But we got the receipts now. Smearing [bleep] on the walls of Congress. Who’s looting? Who’s a savage? Okay? They’re gonna deny it; they’re gonna do what they do. We got the receipts.

What were the biggest challenges in writing, directing, and producing this project?

Doing it all by myself. I didn’t know what I didn’t know. I didn’t have a person to brainstorm off of, I didn’t have a helper. So, I had to learn every aspect of making a movie. I failed again and again, but I felt like I was supposed to tell this story. If it was meant to be, it was going to be. I was just walking blindly. I originally thought this film was gonna come out in March 2020. We had a screening set, and it didn’t happen. Six months later, I still didn’t have a rough cut and at the end of nine months from shooting I still didn’t have a rough cut. I thought, okay I failed. Then, I found myself in South Korea with a new editor! I didn’t fail. That nine months was what  it took to get ready for this person in Korea because she was supposed to be here. My, sort of, “spiritual practice” is non-attachment to outcome. I’m just going to keep showing up and putting one foot in front of the other and the outcome is not in my hands.

How was it to have your community of actors show up for you?

What that said to me was that somehow that with the reputation or whatever that I have, I’ve done something right. The fact that I could pick up the phone and ask some very successful actors to come work for me for two dollars, and they were like, “Yes. Because you do fantastic work!”

What was your  greatest joy of this project?

I feel like I found what I was born to do. I got to build a world. I built a world that I have never seen on the screen before. Most of the people who have the ability to get this film out in the world very quickly are white people, and…it’s just not going to speak to them! Did I know that when I decided to make Red Pill? Absolutely. Even when white people tell me what they think would be scary, I’m just like, “I’m not making a movie to scare you. I’m showing you what scares us…and it’s you!”