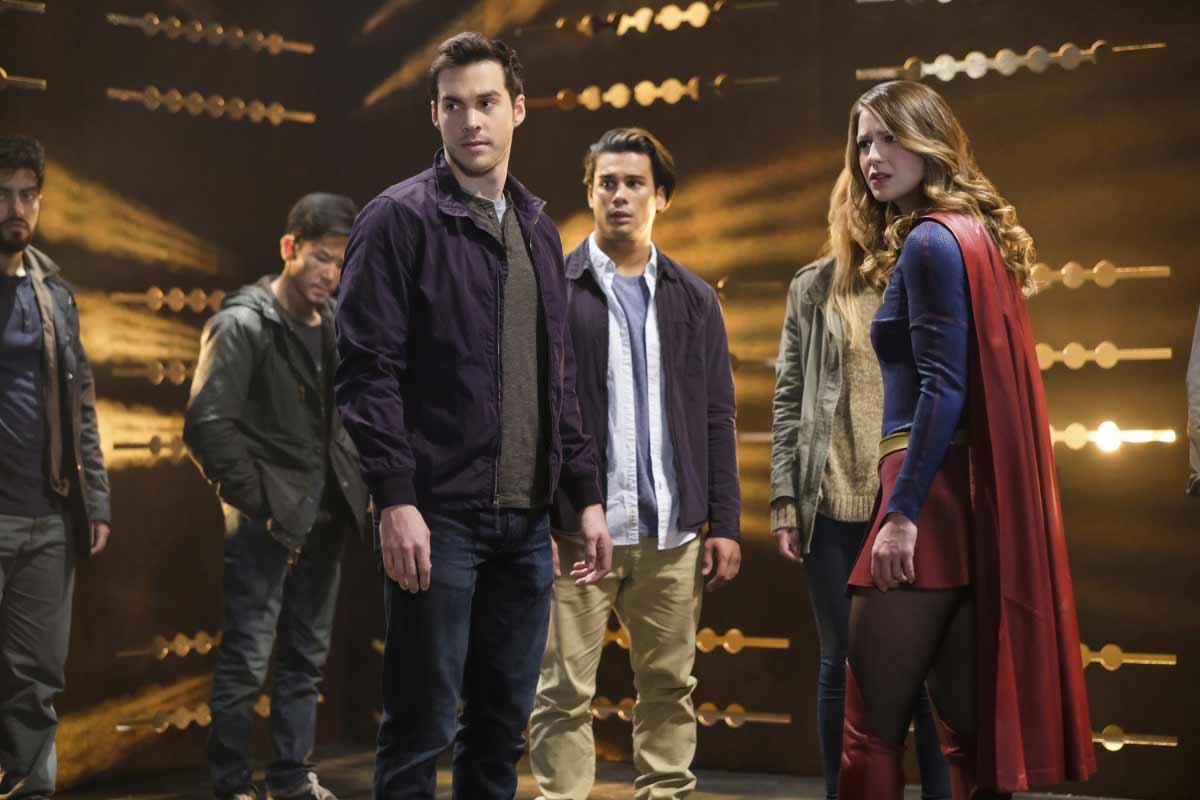 Supergirl is back Y’ALL!!! This episode is slowly leading us toward the revelation (or suspected revelation) that Mon-El is Daxxom royalty.

People are being snatched up

Kara and Snapper are accosted by a woman whose daughter is missing. Kara in all her internalized Supergirl glory, promises that they will find this woman’s daughter. Snapper reprimands her, partially because her missing daughter isn’t news, and because… what if they don’t.

Annoyed, Kara goes to the alien bar and finds out that Mon-El is working there, because all their other employees are dead (raising the question, who owns this bar?) Mon-El (who’s a terrible bartender btw) suggests that Kara stop looking for trouble (clearly this man doesn’t know her AT ALL). Kara meets with Maggie to do some investigating on that lady’s missing daughter and the general increase of missing people in National City.

Meanwhile somewhere else, a relatively attractive man is meeting with a doctor, who kidnaps him; the doctor is working with Roulette.

Kara finds Mon-El in the Cat Co elevator on his day off and, Kara allows him to come along on her search. They both end up at the creepy kidnap-y doctor’s office. The doctor, true to his nature, tries to kidnap Kara and Mon-El and reveals himself to be an alien. Supergirl tells Mon-El to go get Alex, but instead he follows her through the portal, that promptly shuts off leaving them stuck on the other side. To make matters worse, the planet that they have traveled to has a red sun, making them powerless.

Kara and Mon-El are saved by a local named Joe and find out they’re on Maldoria, a moon notorious for slave trade. We also find out that there was slavery on Daxxom. Supergirl, determined to save the missing humans, “surrenders” to the Maldorians to get into their slave trading fortress.

Supergirl finds the missing girl (played by Harley Quinn Smith) and finds out that Roulette is the one behind all the missing people. Roulette justifies her dabbling in slavery by blaming Supergirl for shutting down her Alien Fight Club. A Dominator makes an appearance and buys all the humans.

Supergirl reassures the missing people that they will get out of their current predicament soon, and Mon-El tells her to chill. He questions her incessant need to save people and she lets him know it’s the least they could do, as they’re the only ones to survive from their planets.

Kara refuses to let the Maldorians take the Earthlings and gets electrocuted before Mon-El and the other humans stand up for her and beat the crap out of the Maldorians.

While they are escaping, Mon-El stops one of the Maldorians from harming Supergirl. When the Maldorian goes to shoot him, one of the Dominators stops him and indicates that Mon-El is someone to be respected and unharmed, allowing everyone to escape. They are found by the DEO and return safely to the portal, except for Harley Quinn Smith’s character who gets snatched by a Maldorian. Despite having no powers, Supergirl goes to save her, and Alex assists throwing a yellow sun grenade towards her, temporarily restoring her powers. Everyone is rescued and Supergirl destroys the portal.

Back at Cat Co. Kara presents her story about people being kidnapped and sold as slaves on another planet (which, honestly sounds like something you’d read in the National Enquirer). She tells Snapper off, and lets him know she will continue to follow her heart for good stories, he pretends to not care, but secretly is proud of her.

Two hooded figures go to Maldoria to search for Mon-El and end up killing the creepy doctor.

At the beginning of the episode Supergirl is pursuing some bank robbers with high-grade weapons and has it taken care of for the most part, but Guardian steps in much to her displeasure and takes down the other two thieves. When the last one gets away and heads toward Winn, James tells him to handle it. Winn employs the old hit them with the car door trick and presumably takes him out. While Winn is in the middle of celebrating his victory, the thief gets up, assaults Winn and gets ready to kill him, when James steps in.

Supergirl is annoyed by Guardian and is a bit bored of saving possessions and not people. This isn’t surprising considering a couple of weeks (?? I don’t actually know the timeline of the crossover) ago she was saving another dimension from alien destruction.

Kara, asks Winn to research the connection between the missing people and notices his black eye. When asked, Winn tells her he got mugged.

James goes to the DEO to check up on Winn (still confused as to how he is continuously able to just walk in there but whatevs) and Winn flips out. The trauma of almost dying is too much for him, and he’s struggling with feeling powerless. Alex is stressed because where is Kara (less stressed than when she was kidnapped by Cadmus but OK) and asks Winn to keep her posted on Kara’s reporting mission.

Alex grabs a team to go find Kara and the DEO find out that Kara isn’t on Earth.

Alex asks Winn to come with her to Maldoria and he freaks out because he’s still traumatized from his almost death, Alex gives him some encouraging words and he reluctantly agrees.

The DEO gets through the portal and goes to save Supergirl, Alex tells Winn to stay by the portal, so they have a way home and he tries desperately not to freak out. While waiting for them he gets attacked by Maldorian, but this time he defends himself, restoring his confidence.

Winn apologises to James for freaking out earlier and the two bond over the fact that Winn went to another planet.

Alex is living in the land of sunshine and rainbow because she has a girlfriend!

A deliriously happy Alex volunteers to go with Kara to help find the missing people, but Kara tells her it’s cool and to stay in her happy bubble.

Alex, Winn and J’onn find out where Kara is and that the moon she’s on has a red sun. J’onn reveals that he can’t join the rescue mission because Maldoria’s atmosphere is toxic to Martians. Alex, is plagued by guilt because she was too deliriously happy to do her job properly I guess.

She gets so plagued by guilt that she breaks up with Maggie, because apparently, Alex’s misery and success are mutually exclusive.

Later, Alex apologizes to Maggie about her meltdown, and Maggie reveals that she know that Supergirl is her sister, and the two agree to get back together.

I missed this show and I really enjoyed the ties in between assumed responsibility and fear. I am a little concerned about Maggie knowing Kara’s secret, this seems like the kind of thing that will blow up in Alex’s face if their relationship ends on bad terms, and seeing as Alex is ready to break up with Maggie every episode, that could be soon.

Despite everyone’s disdain for Mon-El he has some great one-liners, I also like looking at his character as an embodiment of white male privilege, he gets a lot of positions he isn’t qualified for like AT ALL and seems to be very content with not fighting to eradicate injustices.