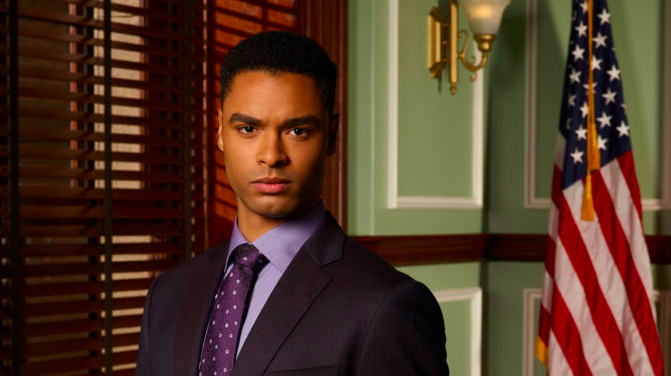 Regé-Jean Page is no stranger to chatting with Black Girl Nerds. During the airing of the Will Packer-produced mini-series Roots, he chatted with us about his role as Chicken George. Page has also gone on to star in the Peter Jackson film Mortal Engines giving us a steampunk look fit for some excellent cosplay. You can now catch him in the ABC series For The People as the cocky, yet confident Leonard Knox. Page clarifies what kind of guy Leonard is and he picks his favorite genre fiction franchise he’d like to star in. Hint: It’s in a galaxy far, far away.

Yeah, it’s been what, a couple of years at this point?

Yeah! It was right when you finished Roots and we were talking about Chicken George and your character there, and now it’s all about For the People.

Yeah. Yes, it’s all about For the People!

In one interview, you mentioned that the script in the series feels like the world that you actually live in. Can you elaborate on how real this story felt to you and if you’ve encountered any real-life experiences in the story?

Rege: I think it’s super important in terms of how it relates to the real world, you know, we live in a complex where the biggest movies on the screen are about superheroes and how you save the world. In a world that is under threat in real life right now, being able to relate to the criminal justice system, being able to relate to the pillars on which this country is built on and how very real people, very normal people navigate in that and do the very real work that is done every day to save the world. That’s what we deal with which I think is very inspiring.

Have you had any experiences based off of your character’s work with this practice or with the cases that he’s worked on as it relates to this particular story?

No, I’ve been lucky enough to have no run-ins with the criminal justice system. Knock on wood, that can change.

You’ve mentioned in the past that your character, Leonard, is quite nebulous and you’ve even said you don’t want to be him, which is very interesting!

Did I use the word “nebulous”?

You used it! It’s on record! [laughing] Do you feel like he’s evolved since season one?

Absolutely! And he evolves constantly at ever increasing rates in season 2, I think everyone does. The show has matured, which is a real kind of rush to work with, the writing is richer than it was, the characters have all grown since season 1, the characters all grow (as I said) increased rates through season 2. You’re dealing with people who have a little bit of experience and are able to carry more weight and so the stakes of the whole thing rise throughout the season and the characters grow faster. They’re dealing with higher stakes, which will, you know, diamonds perform under pressure and all of that, it’s that kind of situation for everyone the second season.

[laughs] Yeah, not really. Leonard’s a combination of a number of different parts. In sense of, yeah, how he expresses himself as cocky or kind of overly-confident, I think that we get that from some very, very interesting places. When someone has that clear a front — when they are showing you something so deliberately, then there’s definitely something that they’re protecting behind that, and that’s always the question that’s fascinated me with Leonard, more than most characters. We really dive into that this season. I think he starts seeing the depth of characters, like there’s more, and particularly this focus on Leonard in one of the episodes of this season which is, I think, some of the most deep-dive work that we’ve done on this show which I’m very proud of. I’m looking forward to that.

I think it’s kind of like the wider point, I think one of the cool things about the characters on the show is they all believe very, very strongly in, and it sounds cheesy, but they all strongly believe in justice and the fun thing about seeing how they all express it so massively differently, and gives you a really good view on the broadness of what that means to different people and what that can mean to different people and why that’s such a huge topic and why it’s so important. It’s all one core belief. Everyone thinks they’re the good guy, always, and how you express that can come out in all these different ways, you know, humility, cockiness, fastidiousness, and everything else, you know.

Do you have a little bit more empathy towards him this season than you did in season one?

I resent the implication I’ve never not had empathy with him!

Well, you said you don’t want to be him, so…

Ah, but that is not the same as not having empathy and I think that’s one of the key things of the show as well, because, in terms of how do you defend, for instance, a horrific serial killer or a rapist or some of the scariest alleged criminals this country has seen, how would you believe in the justice system enough to put up a defense for people that you don’t like is one of the big questions we pose. I think that’s a super important question, because why is it important to hold beliefs even to people that you do not empathize with necessarily, or if you do empathize with them you, you certainly don’t want to be them and yet how can you still hold that humanity in conjunction with your beliefs about how the world should treat other people, ya know?

Appreciate the clarification, understood. Thank you. No, really, I wanted to get that sense.

That’s my jam. My soul is nebulous.

I wanted to switch gears, ”cuz obviously we’re Black Girl Nerds, we’re all about geeky and nerdy things, and I loved seeing you in Mortal Engines, it was just great to see you in the sci-fi genre. Do you have a dream franchise in mind that you like to work on, whether it be sci-fi, comics, or gaming?

Everyone’s got a dream franchise, you don’t kind of like go to the franchise store and be like, you know what, I’m gonna hit the Spider-Man aisle this week, you know what I mean? Genre is a huge amount of fun to work with, I like anything that can use that much raw imaginative space to tell stories about who we are. Into the Spider-Verse was one of the best movies I’ve ever seen in terms of how you get that Spider-Man story right and how anyone can be that powerful and that important and how people realize their potential. I love how you can make the metaphors bigger in a culture like that, which is why I connect so much. I think that aspect is very noble, you know? In terms of picking a franchise, I couldn’t possibly choose. It’s like asking your favorite child. I’ll take Star Wars.

Well, hey, I really hope to see that happen.

Twist my arm, I’ll take it.

What’s the culture of Shondaland like, how has your experience been working on that team?

There’s a will to actively pursue things in front of and behind the camera. There’s a willingness to have conversations about making sure everyone feels respected and knows how to respect each other’s work, and that kind of attitude is hugely generous. In every table read, in every meeting, and every day on set everyone from the top, down to the bottom there is a real belief in looking after each other and making good work for good reasons, which can be rare. So I very much appreciate that and I appreciate observing that while I’m in it.

What’s next for you? What can we see in the future for your next project?

I can see many, many important, entertaining, thrilling seasons of For the People. Beyond that, if I told ya I’d have to kill ya.

Which is thrilling, you know, we’re not going to be friends anymore if that doesn’t materialize. I’m holding you personally accountable.

Okay. Alright, it’s on record, and thank you for that.

You can catch Regé-Jean Page on For The People which airs March 7th on ABC at 10 pm EST.