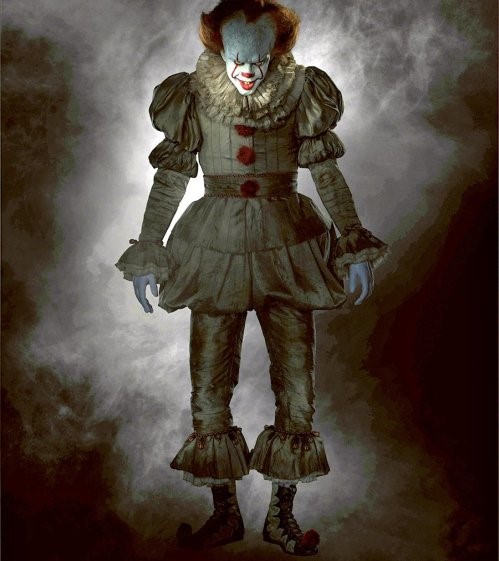 Warning: If clowns aren’t your thing move along darling because this ain’t for you. Plus there will be hella pictures ahead that might bring back some childhood horrors. You’ve been warned.

The film adaptation of Stephen King’s classic 1986 novel IT has been remade and will be hitting the big screen on September 8th of this year (why not October?) and it’s safe to say horror connoisseurs rejoiced when the official trailer launched back in May.

Except for this scream queen right chea and I’ll tell ya why. But first, if you’re not familiar with the 1990 miniseries with the same name as the novel, check out the plot summary, courtesy of somebody who had time to submit to Wikipedia: https://en.wikipedia.org/wiki/It_(miniseries)

It’s something about the adrenaline rush that pulsates through your body when you watch a good horror film. Aside from the fact that this specific genre is the least celebrated, most avoided, yet genius type of filmmaking to STILL not have its own category at the Oscars, everyone has at least one horror film that they actually enjoyed. For me, there are hundreds of scary flicks that tickle my fancy and IT happens to be one of them.

I’ll never understand the infamous fear of clowns that the majority of the population has but hey, we all have our things.

I was about fifteen years old when I watched the 1990 miniseries for the first time and I went into the experience expecting to be converted to the “no red nose” congregation but it honestly takes an on screen séance and a ghost or two to scare me to a point where I can’t sleep at night. Real spit, good ole, Pennywise didn’t terrify me at all. However, a good film is a good film, and that’s what IT, much like the novel, was to me.

Seeing that IT is in my top 20 horror flicks of all time list, you would think I too was geeked when I got first notice of the remake being made. I wasn’t.

I think it’s safe to say that not every great film needs a remake or a sequel and, in my opinion, IT needs to stay in the classic horror flick vault. Why?

In this day in age, it’s super duper hard to scare people. Throw in the fact that post-production believes CGI will do the trick and you’ve got a corny ass remake on your hands.

Check out the trailer: https://www.youtube.com/watch?v=V6JjVwuT2Sk 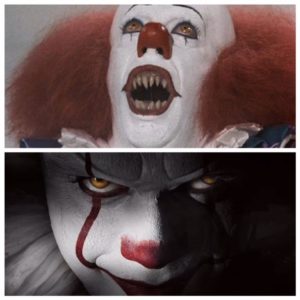 Okay, the 2k17 Pennywise looks computer generated AF. So there’s that. I agree that the 2017 version played by Bill Skarsgard does look more sinister and demented than the 1990 version played by Tim Curry, but come on! Pennywise 2k17 doesn’t look like he even has his signature razor-sharp teeth like the original did! I can’t get jiggy with this generation’s clown for that fact alone. He honestly looks like the villain you’d see on the cover of sci-fi/fantasy book.

The Story (using the trailer as reference):

It seems as if Hollywood added some extra Hollywood to this script as well. Maybe I’ve got

to re-watch the 1990 version, but it just doesn’t seem as if the storyline is a simple horror as the original. Of course, since it’s based on a Stephen King novel, the themes of childhood trauma, memories, and facades will be present I’m sure, but something tells me this version won’t be so subtle about it. We’ll see.

When it comes to horror flicks the score, in addition to the right cues, is what scares people. The “what’s lurking in the dark” moments is what really gets the audience on the edge of their seats and I can tell by the trailer alone that production is TRYING their hardest to scare us. I honestly hope all of the terrifying moments weren’t in the trailer. It seems as if horror films nowadays have hopped on the wretched trend that some comedy flicks have and give us the meat of the film in the trailer. Tragic.

With all of that being said, please believe I’ll be in somebody’s theater with my popcorn on opening night! I surely will. The cast looks promising (at least they kept the black character) and that’s about it. Kid actors will always be the GOAT low key.

Now, will I absolutely love a remake of a classic horror film (Amityville Horror 2k7 is the only good one in my book thus far)? I probably won’t. Will IT 2k17 be a waste of money like the Insidious films that were birthed after the first one? God, I hope not.

Although it looks somewhat whack and over the top, I’ll recline back in my theater chair and watch the remake of the classic IT, hoping to get a few jumps in the process. Let me know in the comments if you plan on seeing the film and your take on the trailer. Keep a look out for my review in September.

Keep it trill. Keep it nerdy.

Sharice Bryant is an indie filmmaker and author based in Los Angeles, California. Check out more of her work at Mybrownbox.com, Blavity.com, and Amazon: https://www.amazon.com/Royal-Family-S-Nicole-ebook/dp/B01CJHCIU6/ref=sr_1_fkmr0_1?ie=UTF8&qid=1497391211&sr=8-1-fkmr0&keywords=the+royal+family+author+s.+nicole